You are here: Home / Climate Change / The Key to the Environmental Crisis is Beneath Our Feet 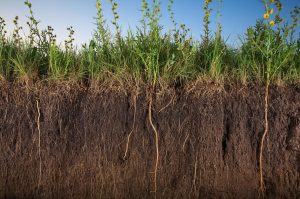 The Green New Deal resolution that was introduced into the U.S. House of Representatives in February hit a wall in the Senate, where it was called unrealistic and unaffordable. In a Washington Post article titled “The Green New Deal Sets Us Up for Failure. We Need a Better Approach,” former Colorado governor and Democratic presidential candidate John Hickenlooper framed the problem like this:

“The resolution sets unachievable goals. We do not yet have the technology needed to reach “net-zero greenhouse gas emissions” in 10 years. That’s why many wind and solar companies don’t support it. There is no clean substitute for jet fuel. Electric vehicles are growing quickly, yet are still in their infancy. Manufacturing industries such as steel and chemicals, which account for almost as much carbon emissions as transportation, are even harder to decarbonize.

“Amid this technological innovation, we need to ensure that energy is not only clean but also affordable. Millions of Americans struggle with ‘energy poverty.’ Too often, low-income Americans must choose between paying for medicine and having their heat shut off. …

“If climate change policy becomes synonymous in the U.S. psyche with higher utility bills, rising taxes and lost jobs, we will have missed our shot.”

The problem may be that a transition to 100% renewables is the wrong target. Reversing climate change need not mean emptying our pockets and tightening our belts. It is possible to sequester carbon and restore our collapsing ecosystem using the financial resources we already have, and it can be done while at the same time improving the quality of our food, water, air and general health.

The Larger Problem – and the Solution – Is in the Soil

Contrary to popular belief, the biggest environmental polluters are not big fossil fuel companies. They are big agribusiness and factory farming, with six powerful food industry giants – Archer Daniels Midland, Cargill, Dean Foods, Dow AgroSciences, Tyson and Monsanto (now merged with Bayer) – playing a major role. Oil-dependent farming, industrial livestock operations, the clearing of carbon-storing fields and forests, the use of chemical fertilizers and pesticides, and the combustion of fuel to process and distribute food are estimated to be responsible for as much as one-half of human-caused pollution. Climate change, while partly a consequence of the excessive relocation of carbon and other elements from the earth into the atmosphere, is more fundamentally just one symptom of overall ecosystem distress from centuries of over-tilling, over-grazing, over-burning, over-hunting, over-fishing and deforestation.

Big Ag’s toxin-laden, nutrient-poor food is also a major contributor to the U.S. obesity epidemic and many other diseases. Yet these are the industries getting the largest subsidies from U.S. taxpayers, to the tune of more than $20 billion annually. We don’t hear about this for the same reason that they get the subsidies – they have massively funded lobbies capable of bribing their way into special treatment.

The story we do hear, as Judith Schwartz observes in The Guardian, is, “Climate change is global warming caused by too much CO2 in the atmosphere due to the burning of fossil fuels. We stop climate change by making the transition to renewable energy.” Schwartz does not discount this part of the story but points to several problems with it:

“One is the uncomfortable fact that even if, by some miracle, we could immediately cut emissions to zero, due to inertia in the system it would take more than a century for CO2 levels to drop to 350 parts per million, which is considered the safe threshold. Plus, here’s what we don’t talk about when we talk about climate: we can all go solar and drive electric cars and still have the problems – the unprecedented heat waves, the wacky weather – that we now associate with CO2-driven climate change.”

But that hasn’t stopped investors, who see the climate crisis as simply another profit opportunity. According to a study by Morgan Stanley analysts reported in Forbes in October, halting global warming and reducing net carbon emissions to zero would take an investment of $50 trillion over the next three decades, including $14 trillion for renewables; $11 trillion to build the factories, batteries and infrastructure necessary for a widespread switch to electric vehicles; $2.5 trillion for carbon capture and storage; $20 trillion to provide clean hydrogen fuel for power, cars and other industries, and $2.7 trillion for biofuels. The article goes on to highlight the investment opportunities presented by these challenges by recommending various big companies expected to lead the transition, including  Exxon, Chevron, BP, General Electric, Shell and similar corporate giants – many of them the very companies blamed by Green New Deal advocates for the crisis.

There is a much cheaper and faster way to sequester carbon from the atmosphere that doesn’t rely on these corporate giants to transition us to 100% renewables. Additionally, it can be done while at the same time reducing the chronic diseases that impose an even heavier cost on citizens and governments. Our most powerful partner is Nature itself, which over hundreds of millions of years has evolved the most efficient carbon sequestration system on the planet. As David Perry writes on the World Economic Forum website:

“This solution leverages a natural process that every plant undergoes, powered by a source that is always available, costs little to nothing to run and does not cause further pollution. This power source is the sun, and the process is photosynthesis.

“A plant takes carbon dioxide out of the air and, with the help of sunlight and water, converts it to sugars. Every bit of that plant – stems, leaves, roots – is made from carbon that was once in our atmosphere. Some of this carbon goes into the soil as roots. The roots, then, release sugars to feed soil microbes. These microbes perform their own chemical processes to convert carbon into even more stable forms.”

Perry observes that before farmland was cultivated, it had soil carbon levels of from 3% to 7%. Today, those levels are roughly 1% carbon. If every acre of farmland globally were returned to a soil carbon level of just 3%, 1 trillion tons of carbon dioxide would be removed from the atmosphere and stored in the soil – equal to the amount of carbon that has been drawn into the atmosphere since the dawn of the Industrial Revolution 200 years ago. The size of the potential solution matches the size of the problem.

So how can we increase the carbon content of soil? Through “regenerative” farming practices, says Perry, including planting cover crops, no-till farming, rotating crops, reducing chemicals and fertilizers, and managed grazing (combining trees, forage plants and livestock together as an integrated system, a technique called “silvopasture”). These practices have been demonstrated to drive carbon into the soil and keep it there, resulting in carbon-enriched soils that are healthier and more resilient to extreme weather conditions and show improved water permeability, preventing the rainwater runoff that contributes to rising sea levels and rising temperatures. Evaporation from degraded, exposed soil has been shown to cause 1,600% more heat annually than all the world’s powerhouses combined. Regenerative farming methods also produce increased microbial diversity, higher yields, reduced input requirements, more nutritious harvests and increased farm profits.

These highly favorable results were confirmed by Paul Hawken and his team in the project that was the subject of his best-selling 2016 book, Drawdown: The Most Comprehensive Plan Ever Proposed to Reverse Global Warming. The project involved evaluating the 100 most promising solutions to the environmental crisis for cost and effectiveness. The results surprised the researchers themselves. The best-performing sector was not “Transport” or “Materials” or “Buildings and Cities” or even “Electricity Generation.” It was the sector called “Food,” including how we grow our food, market it and use it. Of the top 30 solutions, 12 were various forms of regenerative agriculture, including silvopasture, tropical staple trees, conservation agriculture, tree intercropping, managed grazing, farmland restoration and multistrata agroforestry.

How to Fund It All

If regenerative farming increases farmers’ bottom lines, why aren’t they already doing it? For one thing, the benefits of the approach are not well known. But even if they were, farmers would have a hard time making the switch. As noted in a Rolling Stone article titled “How Big Agriculture Is Preventing Farmers From Combating the Climate Crisis”:

“[I]implementing these practices requires an economic flexibility most farmers don’t have, and which is almost impossible to achieve within a government-backed system designed to preserve a large-scale, corporate-farming monoculture based around commodity crops like corn and soybeans, which often cost smaller farmers more money to grow than they can make selling.”

Farmers are locked into a system that is destroying their farmlands and the planet, because a handful of giant agribusinesses have captured Congress and the regulators. One proposed solution is to transfer the $20 billion in subsidies that now go mainly to Big Ag into a fund to compensate small farmers who transition to regenerative practices. We also need to enforce the antitrust laws and break up the biggest agribusinesses, something for which legislation is now pending in Congress.

At the grassroots level, we can vote with our pocketbooks by demanding truly nutritious foods. New technology is in development that can help with this grassroots approach by validating how nutrient-dense our foods really are. One such device, developed by Dan Kittredge and team, is a hand-held consumer spectrometer called a Bionutrient Meter, which tests nutrient density at point of purchase. The goal is to bring transparency to the marketplace, empowering consumers to choose their foods based on demonstrated nutrient quality, providing economic incentives to growers and grocers to drive regenerative practices across the system. Other new technology measures nutrient density in the soil, allowing farmers to be compensated in proportion to their verified success in carbon sequestration and soil regeneration.

Granted, $20 billion is unlikely to be enough to finance the critically needed transition from destructive to regenerative agriculture, but Congress can supplement this fund by tapping the deep pocket of the central bank. In the last decade, the Fed has demonstrated that its pool of financial liquidity is potentially limitless, but the chief beneficiaries of its largess have been big banks and their wealthy clients. We need a form of quantitative easing that actually serves the local productive economy. That might require modifying the Federal Reserve Act, but Congress has modified it before. The only real limit on new money creation is consumer price inflation, and there is room for a great deal more money to be pumped into the productive local economy before that ceiling is hit than is circulating in it now. For a detailed analysis of this issue, see my earlier articles here and here and latest book, “Banking on the People.”

The bottom line is that saving the planet from environmental destruction is not only achievable, but that by focusing on regenerative agriculture and tapping up the central bank for funding, the climate crisis can be addressed without raising taxes and while restoring our collective health.

My Year Without Industrial Food
What if we only ate food from local farms?

Ellen Brown is an attorney, founder of the Public Banking Institute, and author of thirteen books including the best-selling "Web of Debt". Her latest book is "Banking on the People: Democratizing Money in the Digital Age". Her 300+ blog articles are at EllenBrown.com.