You are here: Home / Archives for Happiness 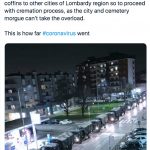 The specter of plague haunts our world, and it brings with it not only the ghouls of disease and death but vast economic and social uncertainty of a sort only the most elderly among us remembers (the Great Depression and World War II). My father is 90 and when I called him a child of the depression once, he pointed out to me that as someone born in 1929, he really didn’t come to political consciousness until the Depression had ended. He was too young to fight in the war, though he joined the … END_OF_DOCUMENT_TOKEN_TO_BE_REPLACED

Helena Norberg-Hodge on the importance of localization