Our Planet Local series travels to Nepal, where guest author Narayan Dhakal explains how local knowledge can help save tigers, demonstrating that localization is a key element of successful biodiversity conservation around the world.

Before the creation of parks and protected areas, people were connected with natural resources both intrinsically and materially. Until recently, however, biodiversity conservation focused strictly on species protection without consideration for the humans who inhabited the same ecosystems. As a result, tension between local people and the protection authorities arose and people’s attitudes toward wildlife protection became negative. They lost their interest in conservation since it directly impacted their livelihoods. The results for tiger conservation have been catastrophic, with fewer than 4,000 individual tigers remaining in the wild. Involving local people, local knowledge and local culture in conservation projects will be crucial to bringing tigers –and many other species – back from the brink of extinction.

Throughout Asia, human/wildlife co-existence was common before development. However, these attachments eroded as people lost their traditional culture and as their societies moved towards an emphasis on material wellbeing. People were distanced from natural resources in the name of economic development (Dhakal, 2012).

Contemporary scientific research and published articles on tiger conservation concentrate mostly on spatial distribution, landscape conservation, human/tiger conflict management, conservation awareness, etc. So far, no significant effort in valuing tigers culturally or religiously or socially has been done to understand the human/tiger cultural and ecological nexus. Despite international understanding and declarations on the importance of people-centered policy, community engagement in biodiversity conservation is still in its infancy.

Some initiatives in Asia and Africa are attempting to engage communities in species conservation; however, they are meeting with many obstacles. Problems include disparity in fair allocation of resources and an imbalance between needs and greed. Poor people from developing countries bear the costs of global environmental and economic crises. And, international scientific communities are either mute or deaf to balancing the needs of the poor and considering issues of equity in conservation.

Why is local knowledge important?

Cultural knowledge that has been practiced for centuries in India and Nepal offers an immense resource for protecting the environment. These ancient belief systems teach that all aspects of the environment – including water, forest, wind, and animals – are part of nature, to be respected as part of the divine creation. Such local cultural knowledge has existed for 5,000 years or more in Asia, but much of this knowledge has become fragmented and eroded under the forces of modernity and capitalistic economic priorities. The present day environmental consequences of seeing nature as a collection of objects to be commodified and exploited by excessive human greed has been predicted in some of the eastern scriptures (Narayanan 2001).

The IUCN Red List of threatened species for Nepal now lists 31 mammals, 33 birds and 9 reptile species. In India, 95 mammals, 80 birds, and 55 reptiles are threatened. All of these species held local cultural values. In fact tigers, elephants, monkeys and snakes are worshiped as gods, with people believing these species give good luck and power, and help balance ecosystems for human living. The religious and cultural information stipulates that all of these species are nature’s creations and each one of them provides immense ecological benefit.

The majority of rural people in India, Nepal and other Asian countries believe strongly in the human-nature system. This belief comes from the local traditional culture, religion and faith (Prime, 2008). Each ethnic group understands and views biodiversity from their unique cultural frame of reference. The ancient scripture of the Hindu religion gives guidance in how we as humans should live in a humane manner. It says: respect every being in its physical form, appreciate nature, live a sustainable life, spread unconditional love, and protect nature’s every creation. The knowledge based in religious belief also highlights how to maintain health and wellness, to be happy all the time. The scriptures further teach us about valuing nature and all its diversity without being contained in the political bias. 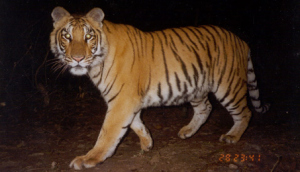 The stories I was told during my childhood were about animals as a source of natural energy that guided the human psyche towards love and compassion. Numerous tales about tigers, elephants, birds (pigeons, parrots, raptors, vultures and many others) carried important messages about maintaining human health and wellbeing. For example, Tiger is considered a powerful and sacred animal in Vedic literature. Tiger is the vehicle of god of power (Durga) . Durga also symbolizes the optimum energy source in nature, and protects every being by transcending her energy. The cultural metaphor of tiger is the optimum natural energy, which is also supported by ecological science in that tigers are the top of the food chain in the forest ecosystem.

The importance of tiger is also stated in Buddhist scriptures: in a past life, Lord Buddha sacrificed his bodily flesh to feed five hungry tiger cubs of a sick mother. In later life these tigers became Buddha’s popular disciples and they spread Buddhism throughout the world. In Chinese culture, different colored tigers represent cardinal directions and are symbols of the earth and afterlife. There are great stories about the tiger and its religious significance in various Buddhist and Vedic literatures. These value systems can help to highlight the importance of biodiversity at the local level. Documenting culturally held biodiversity values will provide added information that may also be useful in developing climate change adaptation strategies.

How can understanding cultural values save tigers?

It may be hard to believe that understanding cultural and religious values can help conserve the tiger. This is a question that most scientists and professionals ask me. Here are my answers:

• It empowers local communities to reclaim the traditional conservation knowledge that their ancestors practiced for generations
• It acknowledges that each cultural group that value tigers has unique power, aspirations and perspectives that can benefit the larger community.
• It overcomes racial and ethnic barriers to conservation by eliminating intercultural misunderstanding in valuing nature and culture.
• It opens an avenue to appreciate diverse cultures in the conservation decision-making process.
• Beyond conservation, respecting and valuing cultural diversity creates a more equitable society and paves the way to eliminating discrimination and corruption.

Dhakal N., K.N. Nelson, and J.L.D. Smith. 2011. Assessment of Residents’ Social and Economic Wellbeing in Conservation Resettlement, a case study of Padampur, Chitwan National Park has been published in the Society of Natural Resources Journal, Vol. 24 (6): 597 — 615

Towards Alternatives: Radical Ecological Democracy (Part 2)
On Earth Day, an Economics for People and Planet

Narayan Dhakal, PhD is an Independent Environmental Expert. Originally from Nepal, his research focuses on the traditional values of plants and animals and the ecological and socioeconomic context in which people live. He has developed and leads an experiential learning program in the human dimensions of wildlife conservation in Nepal.