You are here: Home / Resistance and Renewal / Globalization Produces Sushi … and Slavery 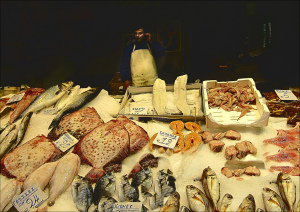 This September marks the 151st anniversary of President Abraham Lincoln’s first Emancipation Proclamation, which led shortly thereafter to the abolition of slavery in the United States.  A century and a half later, most Westerners consider slavery a thing of the past, a relic of the colonial era. But in many parts of the “developing” world, globalization has picked up where colonialism left off. The slave-traders of old are today’s human traffickers, and the profiteers in many cases are modern corporations.

According to estimates of the International Labor Organization of the United Nations, at least 12.3 million people work as slaves or in forced labor worldwide, creating profits for companies that top $32 billion a year. We hear most often about the women and children forced into the illegal sex trade. But there are men too. Both sexes are sold to cotton and palm oil plantations, factories and fishing boats.  Of these, palm oil production and overfishing in particular have received a lot of attention recently from the environmental and scientific communities. Often though, the human cost is overlooked.

What’s the connection to globalization?  Globalization entails the dismantling of local economies and the destruction of livelihoods through centralization, unfair subsidies, and trade policies that favor big businesses over small. Production becomes geared towards export rather than for providing for local needs. In the “developing” world especially, these policies are driving small farmers into debt and eventually off the land.  Without livelihoods to support themselves and their families, they are vulnerable to traffickers and their false promises of lucrative jobs. Such was the case with Vannak Prum, a young Cambodian honored last year at the US State Department as a hero in the fight against human trafficking and the subject of an upcoming documentary (see link below). Eight years ago, while seeking work to support himself and his pregnant wife, he was picked up by a trafficker on the Thai border and lured into a “job” in the fishing industry.  For the next three years, he saw neither his family nor dry land, was drugged and forced to work 20 hours a day for no pay, and witnessed the brutal murders of fellow crew members who refused to follow orders.  Finally, he managed to jump overboard off the coast of Malaysia and made his way to a police station, where he found himself promptly bundled off to another year of indentured servitude on a palm oil plantation. With so much profit involved and whole national economies at stake, governments frequently collude with the traffickers, funneling slaves from one industry to another.

Our gut instinct may be to shame governments, boycott Thai fish, or put pressure on snack food manufacturers to certify that their palm oil is free of human rights abuses.  But while these measures of resistance help, we should also examine the global system that leads to these atrocities. It is facilitated by treaties and regulations, financed through subsidies, and driven by an unflagging commitment by most governments to increase GDP, whatever the costs to people or the planet.  For example, the Malaysian government gives more than half a billion dollars a year towards expanding palm oil production and exports, while arguing under the Trans Pacific Partnership (the new global trade treaty also known as the TPP) for the eradication of all barriers to global trade. This would include such “barriers” as regulations preventing the clearing of virgin rainforest for plantations, or calling for fair wages and worker protection.  Meanwhile, fishing subsidies in Japan keep fish prices artificially low, encouraging overfishing and forcing other nations, like Thailand, to use slave labor to save costs in an effort to compete globally. It’s a messy package of debt, slavery, biodiversity loss, ecological destruction and corporate profits all wrapped up and stamped with the unmistakable seal of economic globalization.

What are the solutions? So-called “sustainable” options have been devised, bearing certifications like RSPO (Roundtable on Sustainable Palm Oil) and the (MSC) Marine Stewardship Council, but these have yet to show any real effectiveness.  These organizations still operate within a corporate-driven, global market model and therefore are more greenwash than action.  Much more heartening—and likely to lead us towards genuine sustainability—are the grassroots efforts to reorient these industries around localized production and consumption. For example, the community-supported fisheries popping up around the United States.

Inspired by Community Supported Agriculture and local business alliance models, these fisheries embody the central principle of economic localization: shortening the distance between producers and consumers. In doing so, they have the potential to provide stable jobs for local fishermen, strengthen the local economy, and keep fishing small-scale and responsive to the ecosystem. Local marketing allows for the sale of all the species of fish that come up in any given net—including the “bycatch,” which can make up around 2/3 of a haul and which is usually thrown back overboard dead. Most of this fish is edible and indeed tasty, but not the target for an industrial fishing boat aiming to bring back only the species that the fickle global market has deemed most profitable at that moment.  Furthermore, consumers would far prefer to eat fish caught by their neighbors than by people forced into slavery on the other side of the world. And long-term income for the fisherman assured by the community-based fishery model means they won’t have to overfish to keep from falling into poverty.

These kinds of localized systems are equally important in the global south. Export-oriented production is rarely a winning proposition for people in developing countries. When people are struggling to meet even their basic needs, the focus shouldn’t be on increasing arbitrary GDP. It simply makes sense that they should be allowed to feed themselves before they are asked to feed us. This applies not just to fish or palm oil, but our entire food supply. As Indian food and farming leader, Vandana Shiva, puts it in The Economics of Happiness film, “The idea that poverty reduction in the south depends on market access to northern markets is a child of globalization. We have limited resources. And if we have to use [our] land and water and energy to produce one extra lettuce head for a British household, we can be sure we are robbing Indian peasants of their rice and their wheat. We are robbing India of her water. We are in fact creating a situation where we are exporting to the Third World and the South famine and drought.” To that, we can now add slavery.

In the US, slaves were officially free less than four months after Lincoln gave his proclamation in 1861. It is anyone’s guess how long it will take us to abolish the slavery imposed by globalization. Localization, however, will surely be the quickest way to get there.

The Ghost Fleet (a film in the works about Vannak Prum and slavery on the high seas): www.theghostfleet.com