You are here: Home / Inner transformation / Positive Thinking in a Dark Age 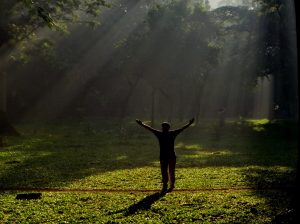 I recall a Buddhist parable involving a stick that appears from a distance to be a snake, causing fear to rise in the perceiver. As the perception shifts upon closer examination, the fear subsides and the relieved hiker continues down the path. Understanding and awareness have a lot to do with how we feel and how we act. As hosts to the dominant cultural mindset (our collective understanding of who we are in the universe), our minds play a critical part in both perpetuating our dominant way of life and also in shifting away from it. And so it’s just possible that I have performed no greater service in my three decades of activism than to simply challenge myself and others to consider the possibility that the social systems that support us and we sustain are inherently incapable of meeting basic human needs and that we must make a fresh start, in a sense, if we are to survive this century and prosper thereafter.

These systems are the largely invisible, cyclical patterns of interaction among and within society’s individuals, institutions and principalities. They include small town school systems all the way out to our globalized economic system and to the mother of them all, our globalized monoculture. You need to perceive the stick as a stick before you can confidently move on, and this consideration is a critical step in transforming the way we live. When an alcoholic decides to sober up, he needs to understand, as AA puts it, that he is powerless to the substance. This understanding is a necessary condition for recovery. Likewise, about 7 billion humans living on our planet are powerless to make our global systems support equitable, sustainable, enjoyable living. Further, we are powerless to use the tools of these systems to prevent our world from crashing down on itself.

In a few critical ways, our global monoculture dates back to the Mesopotamian settlements our history texts associate with the Agricultural Revolution. Over the millennia, this rapidly expanding cultural system, under the guise of various imperial masks, has come to produce predictable results, terrible and also quite marvelous. The terrible includes unrelieved poverty for the majority of the world’s population, widespread unhappiness and spiritual alienation, even (especially?) among the wealthy 10 percent of the world’s population, and the unsustainable use of natural resources. This last result seals our present day ultimatum – our culture and our survival as a species have become incompatible. As if possessing a will and mind of its own, the culture has a voracious appetite for assimilating all cultures into itself and then separating every thing under its umbrella from every other thing into the smallest possible units, mainly to compete with each other. Its compulsion is to consume and waste, grow and expand, dominate, control and compete at a speed and intensity that is destroying the societies we assume it has evolved to serve.

The systemic template of our civilization’s form of social organization is a domination or hierarchical model, in contrast to the tribal or partnership system, which is still fully operative among isolated tribal people and recessively, in remnant forms, throughout our society. Our institutions, even small ones, are virtually all hierarchical – power, wealth and status are concentrated in individuals occupying the higher positions of a pyramidal organizational structure. In contrast, a group of friends arranging for a day together at the park is more likely to organize itself and otherwise behave in a tribal or partnership fashion. Some nuclear and even extended families exhibit partnership qualities, as do cooperatives and collectives.

Despite the predictability of what is, in other ways, a very chaotic and patchwork culture, social innovators, entrepreneurs and activists continue even in this late and desperate hour to put their best energy into trying to make this system work. Though stepping from our prevailing way of life to a better one must be done in fact and not simply in our minds, I sense that we are forestalling the necessary leap in part because too many of us remain not only actively invested in the prevailing way, but mentally invested as well. And there are lots of folks who at some level perceive that things have deeply soured in our world but who, like the townspeople adoring their naked emperor, keep this outlook and associated anxiety well guarded, and carry on. Indeed, though the system as a whole is failing, individuals in society are rewarded with survival goods for maximizing their effectiveness within the system. And just as our collective faith holds up the currency and the economy it serves, our collective faith is also what ultimately keeps civilization itself, and its supporting culture, afloat.   Our active cooperation with the systems and structures of the culture is an expression of this faith.

Though I press myself into the service of partnership community building as an alternative to this, I also express through my actions a reluctant allegiance to the big culture and systems upon which my survival depends. Yet as I personally go about my daily business in life, I carry with me some fluidly changing version of the following reminders to help reorient my thinking:

• It’s up to the people in power to make big change.

• The weight of change itself is too heavy (as if it’s all on my plate).

• Or, there simply is no viable, even thinkable, alternative to the basic competitive, hierarchical framework we’ve been living under.

Confront and challenge these familiar mantras as they creep into your mental projections.

a) this form allows for genuine cultural diversity and countless ways of living beyond the basic form;

b) people may invent civilizational forms that work in ways our current form doesn’t; and

c) there are options and possibilities other than these two basic forms.

I have to honestly think of myself as deeply cynical and hopeless in relation to what I believe our cultural systems and institutions can ultimately provide us. A new deal with the old dealers won’t save us. New dealers in the same game won’t either. A new game, or an assortment of new games, might. The needed change is fundamentally a cultural change, not a piece of legislation or a piece of technology, and it is a change that is struggling from many directions to break through. The mainstream culture is focused on news-making individuals, institutions and events – not systems – so this cultural shifting is relatively invisible and under-reported. Have faith in it, be on the look out and maybe even jump in somewhere.

This essay, under the title “What We Think Is What We Get”, is from Jim’s new book, Positive Thinking in a Dark Age.  It originally appeared in the online journal Swans Commentary.

Jim Tull teaches Philosophy, Community Service and Global Studies at the Community College of Rhode Island, Providence College and Rhode Island’s state prison. He is also the co-founder of Listening Tree Cooperative, a community-based permaculture homestead (www.listeningtree.coop). For much of his work life, he served as the co-director of Amos House, a homeless shelter and soup kitchen on Providence’s south side, while organizing dozens of campaigns promoting peace and justice.