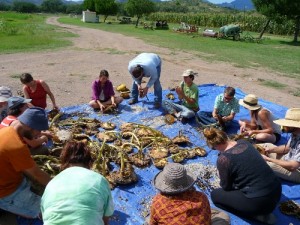 Native Seeds/SEARCH (NS/S) is a nonprofit organization working to promote seed diversity and food security in the southwest region of the United States. Founded in 1983 as a humble operation with seeds stored in chest freezers, NS/S now preserves nearly 2,000 varieties of indigenous desert seeds, including many rare and endangered species.

NS/S believes firmly in the importance of preserving seed biodiversity for its own sake, but they are also convinced that traditional farmers, and the crops they grow, are a stabilizing force for local Native American communities, whose cultural lives and livelihoods are inextricably tied to the fate of the food they grow for themselves.

NS/S serves communities in the Southwest US and northern Mexico through Free Seed Grants, as well as through seed saving education for gardeners, small farmers, Native Americans, Spanish-speakers and K-12 students. NS/S grows and maintains the seed collection at its 60 acre Conservation Farm in Patagonia, Arizona, which also serves as an education and demonstration site.