You are here: Home / Coronavirus / What does self-reliance really mean? Amazing stories from India’s villages 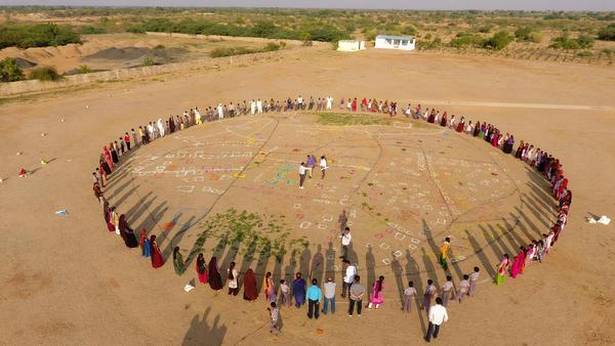 Not so long ago, Dalit women farmers in Telangana used to face hunger and deprivation. Today, they have contributed foodgrains for pandemic relief. Farmers on the Tamil Nadu-Karnataka border have been sending organic produce to Bengaluru even during the lockdown. And Adivasi villages in central India are using community funds to take care of migrant workers who have returned home.

These inspiring stories show the potential of empowered rural communities to cope with crisis. And they expose the tragedy of a path of ‘development’ and governance that has not recognized or, worse, taken away the extraordinary agency of ordinary villagers to manage their lives.

Take Chandramma, who grows 40 varieties of crops, chemical free, on her rainfed plot in Bidakanne village in the Medak district of Telangana. “I have enough food to last through the lockdown and beyond,” she says. Chandramma and thousands of Dalit farmers like her contributed 20,000 kg of foodgrains to Medak district’s COVID-19 relief measures. And they provide 1,000 glasses of nutritious millet porridge daily to health, municipality and police workers in Zaheerabad town nearby.

They are part of the Deccan Development Society, whose women’s sanghas are active in 75 villages in Telengana, and have helped thousands of women from a caste-ist, patriarchal society to revive dry land, millet-centered farming and thus gain control over land, seeds, water and knowledge. Having achieved anna swaraj (food sovereignty) and self-sufficiency, the women are now feeding others.

Further south, a self-help group in Gumalapuram village in Tamil Nadu sends fresh organic produce to Bengaluru, 50 km away. A community-supported farming initiative started in 2017 helps local organic farmers plan and put together a weekly box of vegetables, fruits and groceries for urban customers. Their revenues have increased 10-20 times and the strategy has helped them circumvent the problem millions of their counterparts faced during the lockdown: distress sales at low prices.

These are just some of the stories emerging from villages across India, where communities that have mobilized themselves are showing just how well they can cope with and overcome a crisis like the unprecedented one brought on by the pandemic and lockdown. Does the Prime Minister know about these stories when he suddenly begins to stress the need for self-reliance? If he does, he ignores them, for his government pursues deals with foreign companies, dilutes laws protecting labor and environmental rights, puts heavy tax burdens on handicrafts, and continues to forcibly acquire land, forest, and other resources so vital to the rural economy, only to hand them over to corporations.

Dozens of rural communities demonstrate the enormous livelihood potential of rural, small-scale industries. India’s crafts employ 150-200 million people, second only to agriculture. Government policies have severely disabled them, but in places like Kutch, design innovations and improved local supply and production chains have revived handloom weaving to such an extent that youth are coming back into it – a form of reverse migration.

In Kuthambakkam village near Chennai, small-scale industries like grain processing or manufacturing of solar fan-bulb kits have helped families avoid urban migration. Kuthambakkam’s former sarpanch [village leader] Elango Rangaswamy has come up with a solar-powered process of disinfectant manufacturing, which he says can be set up cheaply in any village to generate jobs.

The pandemic has, in fact, thrown into relief just how self-reliant rural communities really are. In Kunariya village in Gujarat, sarpanch Suresh Chhanga was able to set up a crisis management team, use social media to raise awareness about the pandemic, and organize a full health survey. The villagers ensured that 316 needy families received all basic necessities with the help of panchayat [village council] funds and local donations. When I phoned Chhanga, he excitedly recounted how the village keeps its children busy. “We realized that they are stuck at home, bored or even sometimes facing the aggression of anxious adults, so the panchayat has encouraged elders to teach them whatever special skills they had – music, crafts, cooking, traditional technologies, gardening.”

All this became possible because Chhanga has enabled Kunariya villagers to achieve greater participation in local governance. He has helped build bridges between villagers and government authorities, and ensured that schemes and laws such as MGNREGA [Mahatma Gandhi National Rural Employment Guarantee Act] and the National Food Security Act are implemented, budgets kept transparent, and women’s voices strengthened. Now they are figuring out how to produce over 200 items of consumption locally, rather than spend ₹40 lakh [US$53,500] a month buying them from outside.

These stories demonstrate what self-reliance really means – the revitalizing of rural livelihoods. Note that I am talking about livelihoods, not jobs – about occupations linked to everyday life, social relations, and culture, providing body and soul with satisfaction. Industrializing the economy, with its soul-deadening assembly-line jobs, is not the solution.

Returning lands and livelihoods to villagers rather than forcing villagers into cities is key. In eastern Maharashtra, after two centuries of centralized control by the Forest Department, where revenues from the sale of forest produce like bamboo were mostly cornered by contractors and the government, villages are now able to do their own harvesting under the community rights granted by the Forest Rights Act of 2006. This has been crucial in securing access to nutritional forest foods, medicinal plants, and culturally and spiritually important sites. Sustainable harvesting of forest produce has generated substantial income for these villages, part of which has been plowed into community funds. In settlements like Rahu in Amravati district, Kukdale and Salhe in Gadchiroli district, it’s these funds that are helping returning migrant laborers or local landless people. Gadchiroli has also seen the remarkable mobilization of 90 villages into a Mahagram Sabha [regional government], instilling confidence to move towards greater self-rule and economic self-reliance, and to resist mining.

These stories, of village-level self-sufficiency in food, livelihoods, water, energy, sanitation, housing, and other basic needs, tell us of the urgent need to move towards localization as an alternative to economic globalization, which, as the pandemic exposed, abandoned its workforce when production stopped. The stories tell us that clusters of settlements can be self-reliant in basic needs, significantly reducing distress migration and urban crowding. They tell us that communities can govern themselves, while making the state accountable. Achieving this requires, of course, the dismantling of patriarchy, caste-ism, and other forms of discrimination, but it can be done through mobilization, critical external facilitation, and sensitive education.

If the Indian state is really interested in self-reliance, it needs to support dignified rural livelihoods in agriculture, animal husbandry, forestry, fisheries, crafts, and small manufacturing at the village level. It has to help set up producer-consumer links by eliminating exploitative middlemen; stop pandering to large corporations; eliminate GST [Goods and Services Tax] and other burdens on handmade production; and ensure minimum support prices for primary sector products.

The government’s present policies are, by and large, the complete opposite, and there is little in the recently announced stimulus package that points to any fundamental shift. Given this, it is left to communities themselves, with help from civil society and some sensitive State governments, to use the COVID-19 crisis as an incredible opportunity to move towards equity and sustainability.

This essay first appeared in The Hindu.

We Don’t Farm Because it’s Trendy: Farming is not new to Black people
In Peru, ancestral values shine during COVID-19 crisis

Ashish Kothari is a founder-member of the Indian environmental group Kalpavriksh, and helps coordinate Vikalp Sangam and the Global Tapestry of Alternatives. He taught at the Indian Institute of Public Administration, and served on the boards of Greenpeace International and Greenpeace India.