You are here: Home / Localization / We Will Survive the Coronavirus. Will We Survive Ourselves? 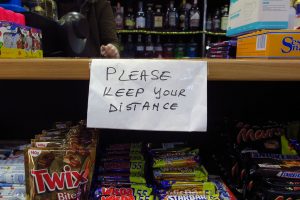 What an astonishing slap in humanity’s face, this coronavirus. But the silver lining is that it is also a rude wake up call. I say ‘silver lining’, for at the centre of this is a massive humanitarian crisis of illnesses and deaths –  and for working classes who cannot switch to ‘online’ work, whose workplaces are shut and who unlike their bosses do not have wealth to fall back on. The COVID-19 pandemic has generated historically unprecedented global action, partly because it has hit the rich and brought the global economy to its knees, but like always, the ‘poor’ are paying a higher price.

And yet, we have been handed an incredible opportunity to right many historic wrongs. These relate to how we have treated our earthly home, and each other as humans … and the two are connected.

Images of cleaner, less crowded cities, and news of the drop in pollution and carbon emission levels are being flashed worldwide, as ground and air mobility plummets. Likewise wildlife must be breathing a bit easier as industrial-scale fishing and hunting reduce. In The Swarm by Frank Schätzing, deep sea micro-organisms with collective intelligence wreak mass scale revenge on humanity for its complete ecological disregard. Who knows if viruses are not doing precisely the same thing? Why should we think only human beings have agency, and the rest of nature is a mute bystander?

But even if the message of the viruses is not consciously generated, we should  heed it: the earth cannot take any more abuse. Massive extraction of minerals and oil, humongous infrastructure slashing across landscapes, and industrial levels of natural resource use (hunting for the global market, monocultural commercial agriculture and fisheries), have disrupted natural systems irreversibly. The fatal consequences for the livelihoods of billions people, for humanity as a whole, and for countless other species, is starkly visible; but also clear now is how this is unleashing micro-organisms that were not earlier affecting human beings, but now are latching on to us as new hosts.

We have let the forces of capitalism, state-domination and patriarchy run amok. The ever-growing chasm between the rich and the poor allows the elite to run for their well-stocked nuclear bunkers, hoping they can escape the virus, while half of humanity wonders how it will get its next meal if it can’t earn its daily wage to buy it.

The lack of accessible healthcare for millions in so-called ‘developed’ countries like the United States, where the pharmaceutical and medical industry has been profiting shamelessly, and the impunity of the fossil fuel and military-industrial complex (the Pentagon alone being the world’s biggest carbon emitter), is clearer than ever before. As an immediate response, we need urgent governmental and civil society steps for the most vulnerable, such as what the Working Peoples Charter has demanded of the Indian government. But simultaneously, we have to demand more fundamental, long-term change.

And so, here is the opportunity. We have the means to refashion the economy and polity, local to global, to be ecologically respectful and socially just. But this requires not simply some cosmetic managerial fixes, like bank bailouts after the 2008 economic collapse, nor technological fixes such as giant screens that will supposedly reduce global warming. These will not stop the periodic global crises that patriarchal capitalism and statism set us up for. No, it means systemic transformations that replace these structures with more equal political, economic, and social relations. We need a dramatic transformation towards genuine democracy, a swaraj that encompasses all of life.

From globalisation to open localisation

This means, firstly, a focus on reversing economic globalisation. This neo-liberal panacea promised to bring prosperity to all peoples, but instead brought enormous distress, growing inequality and ecological devastation. The integration of production, consumption and trade into complex global relations, has meant that no community or country is able to strive for self-reliance or to protect its own livelihoods and environment from damage by multinational corporations and unfair trade.

Along with this is the domination of one way of being and knowing (‘western’) over all others, colonialism onwards, and in an increasingly precarious world affecting even previously secure middle classes, an easy fallback to convenient scapegoats and rigid religiosity (‘those refugees and minorities are to blame’). Which partly explains the electoral swing to the right in so many countries.

But what will economic globalisation be replaced with? Open localisation, a process of striving for self-reliance in meeting basic needs (food, water, shelter, learning, health, governance, dignity, livelihoods) from within a certain human-scale local region, while continuing socio-cultural and some material relations across regions (especially global exchanges of cultures and knowledges on an equal plane).

In such a system, each of us in our local communities has a level of control over decision-making, and localised feedback loops bring ecological and social damage immediately to our notice. This is unlike in a globalised economy in which the damage of my over-consumption is borne by someone a thousand kilometres away. Such a system will significantly reduce the necessity of global movement of products and people, with much less chances of global pathogen spread. If this could revitalise the rural economy and society, it will also reduce – even reverse – the mass migration of people from rural areas into cities, which has resulted in densely packed populations where disease can spread so easily.

But is local self-reliance, and such revitalisation at community level, possible? Thousands of initiatives at food, energy, water, and other forms of community sovereignty across the world show that it indeed is. Most of these have succeeded despite adverse macro-economic and political contexts (e.g. organic farming within a system that promotes chemical agriculture), so imagine how much more they could spread if there were positive policy environments (e.g. in India, shifting billions of rupees of subsidy for chemical fertilisers to organic inputs).

Crucially, this would also entail a shift back to the real economy, focused on actual products and services, and not the crazy roller-coaster virtual economy of shares and derivatives on which a tiny minority of people have become immensely rich. It will bring back the importance of biocultural regions, defined by close, tangible social and ecological relationships. It will emphasise once again that instead of the privatisation of nature and natural resources (including land, water, forests, and even knowledge and ideas), we need to place these in the public domain, with democratic custodianship, as vividly demonstrated by the global commons movement. It will also have to press for a significant reduction in elite material and energy use, as argued convincingly by Europe’s degrowth movement.

This has to be accompanied by radical democracy, where people take political control in place-based collectives, rather than putting all their faith in elected parties; and by struggles for social justice and equity (on gender, caste, ethnicity and other fronts). This means there will be no place for the xenophobic ‘shut the borders’ call of racist and religiously bigoted right-wing forces. Civil society initiatives in many European countries have shown the possibility of localisation while welcoming refugees from war-torn areas. In the long run, of course, such conflict zones themselves need to become areas of peaceful localisation, as in the brave autonomy movement of Kurdish people (led by women) in the Syria-Iran-Iraq-Turkey border area. Both this and the Zapatista autonomy movement in Mexico show how communities can address multiple issues through local radical democracy. These also show the potential of redrawing political boundaries to be more sensitive to ecological and cultural contiguity, identity, and relations.

The Green New Deal of Bernie Sanders in the US and the Labour Party in the UK, despite some serious flaws, and the worker-led ‘one million climate jobs’ campaign in South Africa, demonstrate in earthy details how society can move towards justice and ecological sustainability.

The transformation also needs to encompass spiritual or ethical reconnection with the earth. Indigenous peoples and other communities who still live amidst natural ecosystems have long warned of the consequences of thinking that human beings are outside of nature, not bound by the limits and norms of the earth. In their movements, they have brought back a diversity of ways of being and knowing … buen vivir, ubuntu, sumac kawsay, kyosei, country, minobimaatasiiwin, swaraj, and many others … that speak of living with the earth and each other in harmony.

‘Ordinary’ people have shown extraordinary innovation in forging practical, socially and ecologically sensitive solutions to everyday needs, across the world. Now it’s up to the rest of us to heed the warnings, resist injustice, undermine the systems of oppression, and learn from the pluriverse of alternatives already available. The coronavirus has handed us a great opportunity to move towards such a radical ecological democracy.