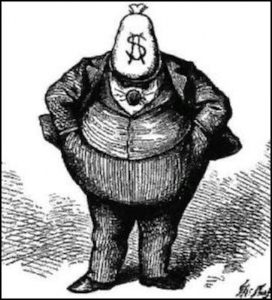 While misogyny, racism, and ethnic taunts were conspicuous signposts on Donald Trump’s path to the White House, much of that road was paved with “populist”, “anti-establishment” and “anti-globalization” rhetoric. Trump’s inaugural address featured numerous populist lines (e.g. “What truly matters is not which party controls our government, but whether our government is controlled by the people”), attacks on the status quo (“The establishment protected itself, not the citizens of our country”), and barbs aimed at globalization (“One by one, the factories shuttered and left our shores, with not even a thought about the millions upon millions of American workers left behind.”)

Are these themes accurate predictors of how Mr. Trump and his administration will govern for the next four years?

Hardly. Long before the election, it was widely pointed out that the populist platitudes issuing from the silver-spooned mouth of a billionaire plutocrat represented little more than elite hucksterism.[1] Of course, post-election, the band of fellow billionaire corporate rascals and knaves Trump assembled for his cabinet and close advisors should have put an end to this fatuous ‘anti-establishment’, ‘populist’ charade once and for all. As one observer noted, “Trump’s cabinet has begun to resemble a kind of cross between the Fortune 500 rich list, a financier’s reunion party and a military junta.”[2]

What about Trump as an ‘anti-globalization’ crusader? Apart from the inconvenient fact that his own loot was built upon global outsourcing and the exploitation of cheap labor abroad for which ‘globalization’ is shorthand, the fact is that a “former Chamber [of Commerce] lobbyist who has publicly defended NAFTA and outsourcing more generally was appointed to Trump’s transition team dealing with trade policy.”[3] Did anyone really buy the notion that the swaddled child of corporate globalization had morphed into a working-class hero battling the ravages of that same globalization?

Some of Trump’s voters were undoubtedly among those who have been economically marginalized by globalization and wealth inequality – the common folk on whose behalf populism historically emerged. No doubt some allowed Trump’s populist, anti-globalization legerdemain to blind them to his scapegoating of fellow displaced working-class victims of globalization – aka immigrants from non-European countries. That these constituted the majority of his voters, however, is questionable. As Jeet Heer argued convincingly back in August,

“Rather than a populist, Trump is the voice of aggrieved privilege—of those who already are doing well but feel threatened by social change from below, whether in the form of Hispanic immigrants or uppity women. … Far from being a defender of the little people against the elites, Trump plays to the anxiety of those who fear that their status is being challenged by people they regard as their social inferiors.”[4]

In other words, Donald Trump is no populist, but an “authoritarian bigot”[5], and his election represents the victory of the rich – and a victory for corporate globalization. He is “not an outlier, but instead the essence of unrestrained capitalism.”[6] (To be clear, this should in no way be read as an implicit endorsement of the neoliberal Democratic Party, whose economic and trade policies are largely pro-corporate as well.)

To see Trump as an anti-globalization crusader is to misunderstand one of the main structural features of globalization itself: the concentration of wealth by fewer and fewer corporations and the consequent widening of the gulf between rich and poor. According to a recent report[7], here are some relevant trends from 1980 to 2013 – roughly the period of hyper globalization:

As Martin Hart-Landsberg explains in his summary of the report, “the rise in corporate profits has been largely underpinned by a globalization process that has shifted industrial production to lower wage third world countries, especially China; undermined wages and working conditions by pitting workers from different communities and countries against each other; and pressured core country governments to dramatically lower corporate taxes, reduce business regulations, privatize public assets and services, and slash public spending on social programs.”[8]

This strategy has not “helped lift hundreds of millions to escape poverty over the past few decades”, as is repeatedly, unquestioningly claimed in the mainstream media.[9] As scholar Jason Hickel has shown, such a claim rests on propagandistic World Bank-sponsored poverty statistics; if poverty were to be measured more accurately, “We would see that about 4.2 billion people live in poverty today. That’s more than four times what the World Bank would have us believe, and more than 60% of humanity. And the number has risen sharply since 1980, with nearly 1 billion people added to the ranks of the poor over the past 35 years.”[10]

Additionally, inequality has reached nauseating heights: the latest analysis by Oxfam shows that “Eight men own the same wealth as the 3.6 billion people who make up the poorest half of humanity.”[11] Globalization – an abbreviated way of describing the worldwide evisceration of regulations hampering corporate profits and the institutionalization of those that enhance them – is an engine of extreme inequality and corporate power, within and between countries, full stop. It is not cosmopolitanism, humanism, global solidarity, multicultural understanding and tolerance, or any of the other noble liberal virtues claimed for it by its votaries. In fact, while a ‘borderless’ world was seen as the pinnacle of the globalization project, physical barriers at the world’s borders have actually increased by nearly 50 percent since 2000[12] – with the US, India and Israel alone building an astounding 5,700 km of barriers. [13]

Widespread hostility towards globalization by the working class in ‘rich countries’ is understandable and justified. The problem is that this animosity is being misdirected against fellow working-class victims of corporate profiteering (“immigrants”, “the Chinese”), and not against the banks and corporations that are the source of working-class misery. This is the strange creature called ‘right-wing anti-globalization’, or, ‘right-wing populism’ – concepts that seem rather contradictory insofar as right-wing politics is about defending and strengthening status quo arrangements of power, privilege and hierarchy. Anti-globalization, on the other hand, is about challenging the gross inequality and injustice of the status quo; and populism – historically at least – is supposed to be about advancing the interests of common people and creating a more egalitarian society. [14]

Nonetheless, it is common in the mainstream media for ‘anti-globalization’ to appear on the ugly right-wing and reactionary side of a simplified binary ledger of political ideologies. It is listed, almost automatically, alongside such distasteful qualities as “inward-looking” and “anti-immigrant”, while the opposite side is ascribed noble qualities like “tolerance” and “solidarity”. This is merely a recycling of the popular (and very much corporate-sponsored) notion of globalization-as-humanizing-global-village. This Thomas Friedman-esque framing works to deflate the would-be critic of corporate globalization by threatening to tar her by association with reactionaries and xenophobes.

To accede to this binary framing would be a grave error, since it further empowers the existing system of corporate exploitation and wealth concentration. However, because there is undeniably an element of the anti-immigrant, xenophobic right that is also – at least rhetorically – anti-globalization, it is absolutely essential for the left to articulate in the clearest terms possible an anti-globalization stance rooted in international solidarity, intercultural openness and exchange, environmental justice, pluralism, fraternity, solidarity, and love, and to continually expose the fact that globalization is intolerant of differences in its relentless dissemination of a global consumer monoculture. In other words, the right should not be allowed to hijack the anti-globalization discourse, and contaminate and confuse it with racist, anti-immigrant sentiment, nor let localization – the best alternative to globalization – become equated with nativism, nationalism, xenophobia etc. It is unfortunate that we have to do this, since peoples’ movements against globalization and for decentralization/re-localization have already clearly drawn this distinction, indeed emerged in large measure in opposition to global injustice. But do it we must, since the corporate media is happily using the rise of the right-wing to discredit the spirited, leftist opposition to globalization that has stalled such corporate power grabs as TPP, CETA, and TTIP.

Should the left make common cause with those on the right when it comes to opposing globalization, irrespective of our profound opposition to the rest of the rightist agenda? Can we hold our noses and engage with this strange bedfellow to slay our ‘common’ foe, globalization? I do not think so. Not only is right-wing anti-globalization based on a deeply flawed and internally incoherent analysis, more importantly the political expediency of the implicit message – “as long as you join us in opposing corporate free trade treaties, your xenophobia, racism et al. can be temporarily ignored and tacitly tolerated” – is noxious and inexcusable.

Fortunately, a number of writers and activists have already been busy on the critical project of framing an inclusive anti-globalization stance. Chris Smaje, agrarian and writer of the Small Farm Future blog in the UK has spelled out a vision of “left agrarian populism” that is genuinely anti-establishment and pro-people (all people), is based on and strengthens local economies, and is fiercely internationalist.[15] Localist and internationalist? Yes. Localization of economic activity is, perhaps counter-intuitively, supportive of greater global collaboration, understanding, compassion and intellectual-cultural exchange, while corporate-controlled economic globalization has hardened, and even produced, cultural/national friction and competition.

Political theorist Chantal Mouffe has similarly acknowledged the right-wing hijacking of legitimate political discontentment against corporate elitism across Europe, the answer to which, she says, must involve “the construction of another people, promoting a progressive populist movement that is receptive to those democratic aspirations and orients them toward a defense of equality and social justice. Conceived in a progressive way, populism, far from being a perversion of democracy, constitutes the most adequate political force to recover it and expand it in today’s Europe.”[16]

Degrowth scholar-activists Francois Schneider and Filka Sekulova have, in line with Smaje’s left-green localism-populism, articulated the important concept of ‘open-localism’ or ‘cosmopolitan localism’.  “Open-localism”, they write, “does not create borders, and cherishes diversity locally. It implies reducing the distance between consumer and producers … being sensitive to what we can see and feel, while being cosmopolitan”.[17] These visions, and many other related ones, provide an important foundation for social justice and environmental activists to build upon in boldly reclaiming the anti-globalization narrative and resistance in these difficult times.

For permission to repost this and other Local Futures posts, please contact [email protected]

[12] Harper’s Index, ‘Percentage by which the number of international borders with barriers has increased since 2014: 48’, Harper’s Magazine, January 2017.

Trump: the illusion of change
Why are my highly educated friends so ignorant about trade?