You are here: Home / Free Trade and Globalization / The Super Bowl of Subsidies 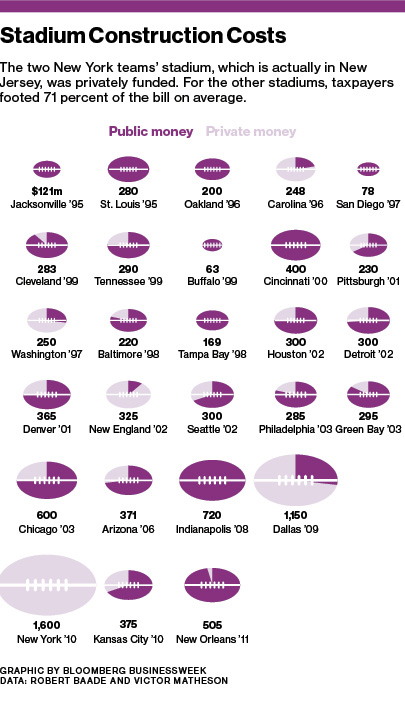 What comes to mind when you think of the Super Bowl? The Bronco’s stunning offense? The glitzy halftime show? Chicken wings and Clydesdales? Call me a spoil sport, but I can’t help thinking subsidies. That’s because even though the NFL (National Football League) generates $51 million a year in ticket sales, $2.1 billion in merchandising revenue, and an estimated $2.8 billion a year for television rights, they also receive about $1 billion each year in state and federal subsidies to cover their capital costs. Many teams also take a page from the playbook of the biggest global corporations by blackmailing local governments:  unless taxpayers pony up for a new stadium or major improvements to the old one, the team will simply pack up and head elsewhere. The NFL also gets a tax break through a convenient loop-hole that deems it a non-profit organization [1].

I work for a very different size of non-profit in which all these millions and billions of dollars are impossible-to-fathom sums. However, the NFL’s ability to fleece the public is nothing compared to most of the big—and even more dubious—subsidies out there. The International Society for Ecology and Culture has been tracking corporate subsidies for more than two decades and these are some of the worst we’ve found:

Oil and gas. Estimates of subsidies to fossil fuel companies range from $10 billion to $52 billion a year in the US alone. Globally, it’s around $500 billion. [2,3] These come in the form of direct monetary gifts, tax exemptions, infrastructure and development support, price controls and so on. What these figures don’t include, however, is even scarier: it is estimated that $120 billion is spent in the US on healthcare related to pollution-induced illnesses, while other “externalities”— including environmental damage and the effects of climate change — defy quantification. For all the political rhetoric about moving to a clean energy economy, it’s hard to imagine we’re going to get anywhere when renewable energy technologies receive less than a fifth of the subsidies given to fossil fuels. [3] And most of these are going to the big projects that have serious social and environmental impacts: vast solar ranches, bird- and bat-slaughtering wind farms, and biofuels that displace food production in developing countries. 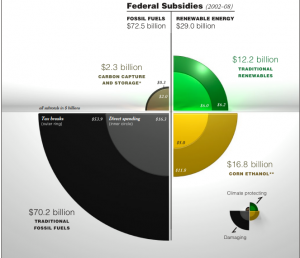 Some will argue that fossil fuels provide more BTUs per investment dollar, which is indeed true, but are BTUs all we care about?  Others will say there’s not as much profit in renewable energy, or as I overheard a Shell recruiter say, “It’s just not commercial.” But how “commercial” would tar sands extraction be—to take just one example of hard-to-access-oil—if the environmental costs were added in and the subsidies taken out?

Fishing. Despite severe declines in nearly every population of commercially-caught fish and calls for restrictions from scientists, politicians and small fishers alike, industrial fleets are still given subsidies of about $35 billion per year. [4] Besides encouraging the unsustainable exploitation of dwindling species and condoning the ravaging of entire marine ecosystems, these subsidies directly undermine local, coastal economies. That’s because the areas where small-scale fishermen used be able to catch enough for their families and local markets have been scoured and fished out. Only the huge boats, with sonar-assisted fish tracking devices and nets big enough to swallow cathedrals can chase after the remaining fish that have taken refuge far out at sea. These subsidies also fuel a growing slave trade in Asia (see “Globalization Produces Sushi…and Slavery”).

Agricultural subsidies. Among the WTO member countries, a reported $221 billion is given out in farm subsidies. When it comes to these kinds of hand-outs, much has been written about trade barriers, protectionism, price-fixing and the poor farmers caught in the middle. The fact is that, for the most part, these subsidies neither hinder global trade nor keep small farmers solvent. In the US, two-thirds of the subsidies actually go to the wealthiest farms: “even celebrity hobby farmers such as Ted Turner, David Rockefeller, and Scottie Pippen collect subsidies that dwarf what the average family farmer receives.” [5] Even more significant are indirect subsidies in the form of massive government support provided to the likes of Monsanto, DuPont and other big agri-businesses to develop biotechnology and pesticides, from which they profit handsomely. On the other hand, funding for organic agriculture in the US was just cut by $22 million.[6] You have to wonder, in this United Nations’ Year of Family Farming, how agricultural subsidies have been able to masquerade as support for farmers.

What all these subsidies have in common is that, without exception, they favor the big over the small, the global over the local and the polluting over the sustainable. Some call these “perverse subsidies” and there are, sadly, many more examples of them out there.

But it’s important to recognize that these subsidies are choices: choices made by our leaders about how to spend our tax money. Whatever your opinion on taxation, the fact remains that most of us worked hard to earn those dollars. Should we not demand that they be used in ways that protect livelihoods, the environment and our health?

You’ll note that the industries that get the most subsidies also happen to be some of the most “profitable”. Funny how that works. As with the tar sands example above, what would happen if we truly “levelled the playing field” and removed or shifted subsidies? Would small-scale wind power actually be more lucrative than fracking? Would fish rebound in coastal waters, while everyone still got enough to eat? Would local food outcompete global food even on supermarket shelves? Based on numerous localization initiatives that are already tackling such issues around the world, the answer looks like a resounding yes.

To get back to my original topic (it’s hard to forget as the anticipatory frenzy around the Super Bowl grows) I know that many people, my dearly-loved brothers included, would probably be in favor of supporting the good ol’ sport of football in this way. As one journalist wrote: “It’s about the intangibles of identity and pride, which are far harder to value.”  I, for one, think that’s a useful metric for more than just the NFL. Are we prouder of ravaged landscapes and emptied oceans than we are of clean air and waters full of life?  Do we want to identify with a society that puts people and livelihoods first or one that idolizes corporate profits?

For me the answers are clear, and shifting subsidies is just about the simplest way to make our economies more ecologically-sound, more community- and people-friendly, and more localized. It is the goal, or touchdown if you will, of economic localization.

Davos: peeling back the veneer
Land Grabbing and the Threat to Local Land Rights