You are here: Home / Health / Beyond ObamaCare: From Healthy Profits to Healthy People

As the New Year approaches, the political agenda in the United States is still overrun with last-minute squabbling over the Affordable Care Act, known more familiarly as ObamaCare. Framed erroneously as a dichotomous debate—left versus right, socialism versus capitalism, government versus business—the real flaws of the law have been effectively concealed in political melodrama. The malfunctioning of the government website is just the latest in a string of distractions that steer attention away from the fact that ObamaCare is really just another form of corporate welfare. 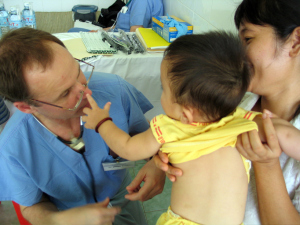 If we’re primarily concerned about the health of people rather than the profits of corporations, we’re going to need to step back and take a look at the bigger picture.  Doing so reveals the ways in which healthcare is inextricably entwined with the rest of our economic system. While economic globalization is more familiar under the guise of so-called “free trade” treaties like NAFTA and the currently negotiated Trans-Pacific Partnership, ObamaCare shares many of the same features.  The ill-fated website offers Americans the opportunity to shop on the Affordable Care Act “marketplace” and pick their coverage on the “exchange,” giving the illusion of consumer choice. Just as when you go to the supermarket and stand in the cereal aisle, the varied and colorful boxes entice with their different shapes and flavors, but inside are merely different proportions of the same refined sugars, processed oils and mass-produced, likely GMO grains. The money you spend, whether it’s on Cheerios, Chex or Wheaties, goes straight into the coffers of massive food and agricultural corporations. In the case of ObamaCare, no matter which insurer you choose, your money goes directly to already bloated mega-corporations.

Among them is Kaiser Permanente, the largest managed care organization in the United States. Kaiser has had more than 3,000 lawsuits filed against it in thirteen states for failures in patient care, treatment of workers and regulatory compliance1. Last year, Kaiser posted a net income of $2.6 billion2, despite the low-tax status of their non-profit arm. Kaiser’s profits are not unusual: in 2009 alone, while much of the country struggled through the doldrums of the financial crisis and 2.7 million people lost their health insurance, US insurance company profits rose by 56%. The same year, Wellpoint, an insurance conglomerate offering coverage under several different names (Aetna, Blue Cross and Blue Shield brands), actually boosted its profits by 91% by cutting off coverage for 3.9% of its clients3. Now, ObamaCare forcibly compels every American to seek coverage from insurance companies like these – companies that are at the same time assured of a steady supply of tax-funded subsidies. As the CEO of Wellpoint put it: “In the fully insured marketplace…We remain optimistic about the long-term membership growth opportunity through exchanges.”4

Many have claimed that ObamaCare will hurt businesses – a charge that has fueled much heated debate. In the light of the massive profits that insurance conglomerates stand to make, it becomes clear that this is no black and white argument. Hidden in the grey shadows is the fact that many businesses—the big ones—will benefit or, at the very least, will not be harmed. There are enough loopholes to allow big businesses to opt out through cutting staff hours below the ‘full-time’ threshold, and some large companies, like Wal-Mart, have already done so. It is the small businesses that are projected to suffer most—an outcome that is common to most policies in the globalization era.

Similar to the policies that subsidize the global development of fossil fuel and pesticide industries, ObamaCare also features a stunning lack of public input into how our taxes are spent. As one blogger pointed out, “our choice is not one between a healthcare system administered by the state, and one administered by Columbia HCA, Pfizer and Kaiser Permanente. Those are really just two sides of the same coin, with ordinary people locked into dependence on unaccountable state and corporate bureaucracies that keep healthcare artificially scarce.”5

None of this is to say that the healthcare system in the US needs no reform. Consider this: not only does the nation as a whole spend two-and-a-half times more per person on healthcare than most industrialized countries, but US government spending per capita on healthcare also exceeds that of many countries, like Canada, that cover all their citizens. Yet in the US an estimated 47 million people are uninsured and many others are underinsured6. Part of this is because healthcare in the US is heavily dependent on costly high technology and pharmaceuticals, making it far more expensive than elsewhere. Despite the expense, the US scores poorly on many health indicators, such as infant mortality, heart disease and life expectancy7.

So what would we do if we were offered a choice? If people were able to vote on how our tax dollars are spent on healthcare, I believe most would choose a system that meets the needs of the majority. A single-payer or public option may offer such a possibility, but does it go far enough?  I believe we need go beyond the question of how we pay for healthcare, and look more deeply at some fundamental questions about our economy and its influence on health and healthcare. For instance:

• The poor nutritional value of our food, and the consequently high levels of obesity, diabetes, and heart disease.

• The toxins in our food, water, and the air – not just from pesticide use but from industrial processes of all sorts – and high rates of cancer, birth defects, asthma, and more.

• The rise in poverty, leading to an eight-fold increase in the proportion of Americans qualifying for Medicaid over the last fifty years.

• The favoring of technological development over investment in people, which means doctors have so little time with patients that they are more likely to prescribe pills than they are to truly understand the root cause of patients’ malaise.

• The spiking prices that allow only the 1% to receive quality care and the full benefits of high-tech medicine.

• The casino-nature of our skewed economy, in which increases in health insurance premiums have far outstripped the rise in wages8. 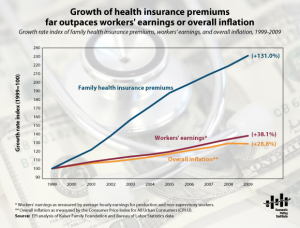 ObamaCare, we’d be far better off with an approach that changes the economy—the root cause of all the issues just mentioned – shifting it from a globalized, corporate-dominated system of exploitation to one of democratic, equitable, localized economies.  Such a shift would put people, not corporations, at the center of the healthcare system.  As with localized food systems, the distance between patients and providers would be shortened, cutting out the middlemen who usurp doctors of their decision-making power and skim off the profits. It would focus on preventative medicine as much as possible—keeping people healthy rather than keeping profits healthy for a few corporations. It would focus on treatments that work, not just the ones that are most profitable for insurers, hospitals, and pharmaceutical companies. It would encourage research and development for the purpose of increasing wellbeing, not for collecting lucrative patents. It would be holistic, taking into account the interconnected influences of community and the surrounding environment. It would use our tax dollars to contribute to societal and personal wellbeing, not to the bottom lines of health insurance companies.  Nested within localized economies, it would provide human care and community care, not corporate care.

It is fortunate that the economic changes we need to make to improve our healthcare system are the same ones that will tackle inequality, unemployment, climate change and many other social and environmental crises. Those changes would not be as difficult to implement as most people believe. Globalization is not the product of evolution:  it’s the result of policy choices, and we can make different ones. Doing so means moving beyond the left-right divide to come together to envision truly democratic, equitable and localized economic systems.

Our escalating crises call for immediate action, and perhaps the most strategic thing we can do is to educate ourselves and others about the corporate and banking structures that run our economy, control our governments, and heavily influence the behavior of us all. I believe that education is activism, and that an informed citizenry is our best chance to take back control of the economy – bringing production, commerce and exchange back to an accountable, human scale at the local, regional, and even national levels. From there we can better address today’s multiple crises, including those in health care.

Helena Norberg-Hodge is founder and director of the International Society for Ecology and Culture (ISEC). A pioneer of the “new economy” movement, she has been promoting an economics of personal, social and ecological well-being for more than thirty years. She is the producer and co-director of the award-winning documentary The Economics of Happiness, and is the author of Ancient Futures: Learning from Ladakh. She was honored with the Right Livelihood Award for her groundbreaking work in Ladakh, and received the 2012 Goi Peace Prize for contributing to “the revitalization of cultural and biological diversity, and the strengthening of local communities and economies worldwide.”