You are here: Home / Economics of Happiness Conferences / The Post-Wall Street Era Will be Local 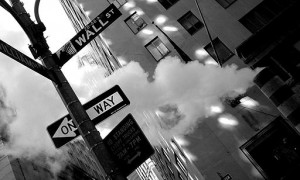 On a shelf of the Phoenix Bookstore, located in the heart of the ecovillage of Findhorn in the north of Scotland, the title Going Local (Free Press, 2000) caught my eye. The book was written by the American economist Michael H. Shuman. It was June 2002, and I had come to Findhorn to attend the international “Restore the Earth” conference, during which Vandana Shiva, Winona LaDuke, Helena Norberg-Hodge and some others were to present their ideas.

Shuman, in his book, underlines the importance of local communities reclaiming their independence so as not to be crushed by globalization. His text refers to European and North American successes—showing that people can “take back control of what is happening to their local communities” by recreating living economies. The angle of attack he proposes, doing business as a way to create a better world, seemed relevant to me. Indeed, big business is the main destroyer of our environment. But companies—both small and big—may well also be the only entities powerful and creative enough to reverse this trend.

Thus we need, as Paul Hawken suggested in his book The Ecology of Commerce (Harper Business, 1993), a way to create businesses that ensures that the industrial business model, as it currently exists, will be replaced by businesses that will serve the human community and become the sustainable producers of tomorrow.

Aided by their diversity, the forward-thinking entrepreneurs I describe in my book  Made Local. Jobs, Growth, Sustainability: what if the solution was local? appear to share a common quest: to build a society that may become planetary, participatory and compatible with life, as opposed to a system that has become bankrupt, dysfunctional and meaningless. These citizens, communities and businesses want to invent new ways to reclaim the economy and the democracy.

Such a change requires that vision and action be rooted. Not in a sclerotic withdrawal, but by anchoring the projects to a tangible reality—to have us become more deeply aware of the impact of our decisions; to reinforce the ties of solidarity, locally and with each point on the planet.—because it is really on a local level that individual behaviors and attitudes find sense and vitality.

The old modernist vision believed that it would free humans by having them become individualist consumers. But we ended up being inert and powerless, manipulated by our own desires and for the sake of “market needs.” It abandoned the enduring heritage that is to be passed down to later generations; it reduced work to enslavement to the world of machines; it denatured lasting use, transforming it into ephemeral consumption, and deprived it of its very function, which is to preserve life. That blind quest has hidden—and reinforced—the malfunctions of a disoriented world, agitated by the unique and destructive frenzy to produce.

If nothing changes in the way we act, a likely scenario for the upcoming years, according to the U.S. National Intelligence Council in its project Global Trends 2030, will involve the hardening and general destabilization of fragile global equilibriums, with unequal economic growth, a weakening of the West to the benefit of Asia, and global stability threatened by volatile markets and a damaged climate.

Changing our actions requires understanding what generates them. “There are a thousand hacking at the branches of evil to one who is striking at the root,” observed Thoreau. It is indeed at the root where wisdom wishes we would intervene. That is where we are acted upon, manipulated by our own fears. We fear being isolated, threatened by others and by a natural environment that we imagine to be inert, strange and hostile. However, there is at least one other way to see things, just as realistic but more fecund: We are part of an ecosystem to which we are profoundly related and that permanently generates life. Instead of destroying it through ignorance and arrogance, it would be reasonable to honor it while observing it, respecting it and allowing it to inspire our action. David Korten mentioned this when we met: “This system is extraordinary in its ability to organize itself to capture and use local nutrients, water and energy in each area of the planet. It is extremely local. Seize the resources, use them, and trade them to preserve life through cooperative sharing. All these microsystems are interconnected, and in the end they constitute a global interdependent biosphere.”

In the grand scheme of things, large human societies constitute the connective tissue of millions of local societies. Repairing our weakened connections with nature may thus take place both at the heart of these communities and through their continual exchanges.

We can bring a universal view to the human condition. Reflect that after having passed its infancy stage, humanity is getting ready to pass its adolescent stage, rich with ideas not yet well controlled, that tests its new power with a roar, wrongly perceived as without limits. Perhaps the time has come for our young species to begin acting like adults, commanding their ship with wisdom, good sense and elegance. Maybe we can set aside the old story of Separation. If we keep believing we are separate from each other, from life and from the universe, we will take ourselves to chaos. Don’t we deserve a better fate? Shouldn’t we free ourselves from the litany of helplessness? Why should we pass to the future a cry of terror when we are able to offer it a lighthearted polyphony?

The Spirit of Entrepreneurship

Thousands of local entrepreneurs around the world have in common a powerful and creative vision of the world. They have decided to translate their vision into their own lives, their work and their relationships: a concern for consistency, the courage to take risks, to fail and to start over and, lastly, the will to share their passion with those around them and those who will follow.

They and many of us now understand that conscious consumerism will not be enough. As Stacy Mitchell says, “we can’t shop our way to a better economy.” Still, stepping from economics to politics doesn’t mean adopting the old way to do politics. One will have to create an alternative to the traditional domination by force. Which means learning to invent new ways that will link the power of action to the precious tool of co-creation. This form of power relies not on Strength but on deep Authority; on the ability for people to be congruent, aligning their words and their acts.

This new brand of entrepreneur has the personal qualities to help lead communities into new paths. Because their vision is one of a planet that knows how to feed all of its children, provided that they, in return, choose to respect themselves and the Earth.

According to Ervin Làszlò, the time has come for us to sense the urgent need to abandon our obsolete beliefs, to finally dare to envision the peaceful and restorative civilization that we wish for, and to undertake on a daily basis the changes that will allow us to get through these challenging times.

“What is good for General Motors is good for America” is an old saying. Among the many changes that will bring about a new consciousness, why not decide—calmly and once and for all—that only that which is good for humanity and for life is good for business? Because the existence of the latter is justified only by the measure of its contribution to the well-being of humanity and the vitality of its ecosystem.

Raphaël Souchier is a French consultant and writer who has worked for the last 30 years in the field of sustainable local economies. His latest book (available in French) is entitled  “Made Local. Jobs, Growth, Sustainability : what if the solution was local?” www.madeinlocal.info. He will be one of the keynote speakers at the “Local Lives, Global Matters” conference, in Castlemaine, Victoria, Australia, October 16-19.