You are here: Home / Free Trade and Globalization / The Global Economy’s “Impeccable Logic” 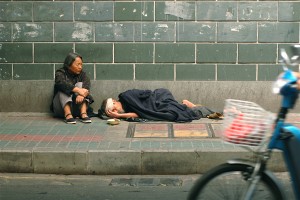 Ever since the Occupy movement coined the terms “the 1%” and “the 99%” to point out disparities of wealth and power, the gap between rich and poor has received a lot of attention. In his highly-regarded 2014 book, Capital in the Twenty-first Century, for example, Thomas Piketty’s central thesis is that wealth inequality is bound to increase in modern capitalist economies. This was underscored by a recent Oxfam report, which tells us that the world’s 85 richest people now have as much wealth as the poorest 3.5 billion; that the richest 1 percent will own more than half the world’s wealth by next year; and that in the US, the wealthiest one percent captured 95 percent of income growth since 2009, leaving the bottom 90 percent even poorer. (1) There’s more, but you get the idea.

Statistics like these have led to widespread questioning of the moral underpinnings of the global economy. But does morality have any place in conventional economic thinking? While the overseers of the global economy are beginning to see problems with the wealth gap, it’s for reasons that are neither moral nor ethical, but purely practical: extreme inequality, they fear, might threaten the continuance of the system itself. Christine Lagarde, Managing Director of the IMF, worries that “excessive inequality is not good for sustainable growth [sic]”(2), while billionaire and self-described plutocrat Nick Hanauer is even more concerned: “if we don’t do something to fix the glaring inequities in our society, the pitchforks will come for us.” (3)

To suggest that conventional economic thinking lacks a moral foundation is not to say that corporate CEOs and IMF economists have no moral or ethical values: most of them probably contribute to charity, feel tender thoughts towards their children and parents, and may even be angered at certain forms of injustice. The question here is whether there’s a moral dimension to the way conventional economics regards wealth inequality.

To help answer that question, let’s revisit a famous memo written by one of the most influential economists of our time, Lawrence Summers. The memo was written in 1991, when Mr. Summers was Chief Economist of The World Bank. In it he argues that heavily polluting “dirty industries” should be located in the less developed countries (LDCs). This is because the ‘cost’ of illness and premature death is based on lost earnings, and so the lives of the poor are less valuable than their wealthier counterparts:

After arguing that “under-populated countries in Africa are vastly UNDER-polluted” and lamenting that high transportation costs “prevent world welfare enhancing trade in air pollution and waste,” Summers concludes his memo with this:

“The problem with the arguments against all of these proposals for more pollution in LDCs (intrinsic rights to certain goods, moral reasons, social concerns… etc.) could be turned around and used more or less effectively against every Bank proposal for liberalization.” (4)

In other words, any moral qualms about dumping toxic waste in poor people’s backyards must be suppressed, because acknowledging the validity of those concerns would call into question the legitimacy of the entire “liberalization” package ­of deregulation and free trade pushed by The World Bank, IMF, WTO and other institutions. If moral values conflict with the economic model, Summers suggests, then those values must be abandoned.

One would expect that the leaking of this memo in 1992 would have irreparably damaged Summers’ reputation, derailing his career. There was no lack of outrage from certain quarters. Brazil’s Secretary of the Environment, Jose Lutzenburger (an ardent environmentalist and winner of the Right Livelihood Award) wrote back to Summers: “Your reasoning is perfectly logical but totally insane… Your thoughts [provide] a concrete example of the unbelievable alienation, reductionist thinking, social ruthlessness and the arrogant ignorance of many conventional ‘economists’ concerning the nature of the world we live in…. If the World Bank keeps you as vice president it will lose all credibility.” (5)

Not only did Summers hold on to his position at The World Bank, his career path continued ever upward. He was soon appointed to a number of high-ranking positions by President Bill Clinton, eventually rising to Secretary of the Treasury (where he presided over the deregulation of the financial industry); from 2001 to 2006 he served as President of Harvard University; after a stint as the managing partner of a major hedge fund, he was chosen by President Barack Obama in 2009 to head up his Council of Economic Advisers. (6)

There were some repercussions, however. Jose Lutzenberger was fired soon after writing his scathing criticism of Summers.

Summers now claims that he signed the memo but didn’t write it, that its contents were taken out of context, and that the whole thing was meant as “sarcasm” anyway. But the years that followed saw precisely the “welfare enhancing” trade in pollution that the memo called for. Dirty industries have, in fact, migrated to the less developed countries – accounting for both environmental improvements in the rich countries (about which Northerners are unduly proud), and horrifically blighted environments in places like China. And waste is now routinely traded to the South, with cargo ships bringing discarded plastic, e-waste, and other effluent of the consumer culture to Third World countries for disposal or “recycling”, at great cost to their environment and the health of their citizens.

The “impeccable economic logic” which Summer embraced is deeply troubling, especially when so much of the global population is, by that logic, expendable: people who are admired in their communities, loved by neighbors, friends, and family; people who are caregivers for children and the elderly, who entertain and educate their communities as singers and storytellers; people who are honest and trustworthy, and crucial role models for the young. Such people may have countless admirable traits, but the only one that matters to mainstream economists is their contribution to global economic output. If in that arena – measured by their monetized earnings – they are deemed deficient, their worth becomes negligible. And as the wealth gap grows, millions more are joining the ranks of the expendable every year.

There will never be enough resources to bring all those billions of people up to the levels of income and consumption common in the west – something that even pie-in-the-sky economists who dream of endless “sustainable growth” must realize. It’s frightening to imagine what their next “welfare-enhancing” proposal will be.

Land Grabbing and the Threat to Local Land Rights
Current Trade Treaties: “a revolution against law”