You are here: Home / Food and Farming / The food shortage solution in your backyard 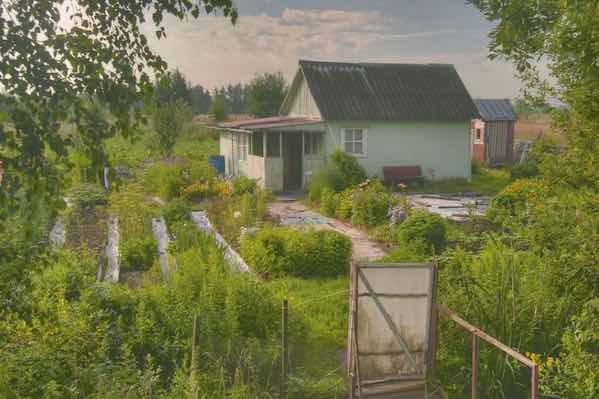 A confluence of crises – lockdowns and business closures, mandates and worker shortages, supply chain disruptions and inflation, sanctions and war – have compounded to trigger food shortages; and we have been warned that they may last longer than the food stored in our pantries. What to do?

Jim Gale, founder of Food Forest Abundance, pointed out in a recent interview with Del Bigtree that in the United States there are 40 million acres of lawn. Lawns are the most destructive monoculture on the planet, absorbing more resources and pesticides than any other crop, without providing any yield. If we were to turn 30% of that , says Gale, we could be food self-sufficient without relying on imports or chemicals.

Permaculture is a gardening technique that “uses the inherent qualities of plants and animals combined with the natural characteristics of landscapes and structures to produce a life-supporting system for city and country, using the smallest practical area.”

Russian families have shown the possibilities, using permaculture methods on simple cottage gardens or allotments called dachas. As Dr. Leon Sharashkin, a Russian translator and editor with a PhD in forestry from the University of Missouri, explains:

Essentially, what Russian gardeners do is demonstrate that gardeners can feed the world – and you do not need any GMOs, industrial farms, or any other technological gimmicks to guarantee everybody’s got enough food to eat. Bear in mind that Russia only has 110 days of growing season per year – so in the US, for example, gardeners’ output could be substantially greater. Today, however, the area taken up by lawns in the US is two times greater than that of Russia’s gardens – and it produces nothing but a multi-billion-dollar lawn care industry.”

Dachas are small wooden houses on a small plot of land, typically just 600 square meters (656 yards) in size. In Soviet Russia, they were allocated free of charge on the theory that the land belonged to the people. They were given to many public servants; and families not given a dacha could get access to a plot of land in an allotment association, where they could grow vegetables, visit regularly to tend their kitchen gardens and gather crops.

Dachas were originally used mainly as country vacation getaways. But in the 1990s, they evolved from a place of rest into a major means of survival. That was when the Russian economy suffered from what journalist Anne Williamson called in congressional testimony the “rape of Russia.” The economy was destroyed and then plundered by financial oligarchs, who swooped in to buy assets at fire sale prices.

Stripped of other resources, Russian families turned to their dachas to grow food. Dr. Sharaskin observed that the share of food gardening in national agriculture increased from 32% in 1990 to over 50% by 2000. In 2004, food gardens accounted for 51% of the total agricultural output of the Russian Federation – greater than the contribution of the whole electric power generation industry; greater than all of the forestry, wood-processing and pulp and paper industries; and significantly greater than the coal, natural gas and oil refining industries taken together.

Dachas are now a codified right of Russian citizens. In 2003, the government signed the Private Garden Plot Act into law, granting citizens free plots of land ranging from 1 to 3 hectares each. (A hectare is about 2.5 acres.) Dr. Sharaskin opined in 2009 that “with 35 million families (70% of Russia’s population) … producing more than 40% of Russia’s agricultural output, this is in all likelihood the most extensive microscale food production practice in any industrially developed nation.”

In a 2014 article titled “Dacha Gardens – Russia’s Amazing Model for Urban Agriculture”, Sara Pool wrote that Russia obtains “over 50% agricultural products from family garden plots. The backyard gardening model uses around 3% arable land, and accounts for roughly 92% of all Russian potatoes, 87% of all fruit, 77% vegetables, and 59% all Russian meat according to the Russian Federal State Statistic Service.”

Our beautiful but toxic and wasteful green lawns

Rather than dachas, we in the West have pristine green lawns, which not only produce no food but involve chemical and mechanical maintenance that is a major contributor to water and air pollution. Lawns are the single largest irrigated crop in the U.S., covering nearly 32 million acres. This is a problem particularly in the western U.S. states, which are currently suffering from reduced food production due to drought. Data compiled by Urban Plantations from the EPA, the Public Policy Institute of California, and the Alliance for Water Efficiency suggests that gardens use 66% less water than lawns. In the U.S., fruits and vegetables are grown on only about 10 million acres. In theory, then, if the space occupied by American lawns were converted to food gardens, the country could produce four times as many fruits and vegetables as it does now.

A study from NASA scientists in collaboration with researchers in the Mountain West estimated that American lawns cover an area that is about the size of Texas and is three times larger than that used for any other irrigated crop in the United States. The study was not, however, about the growth of lawns but about their impact on the environment and water resources. It found that “maintaining a well-manicured lawn uses up to 900 liters of water per person per day and reduces [carbon] sequestration effectiveness by up to 35 percent by adding emissions from fertilization and the operation of mowing equipment.”

To combat water and pollution problems, some cities have advocated abandoning the great green lawn in favor of vegetable gardens, local native plants, meadows or just letting the grass die. But well-manicured lawns are an established U.S. cultural tradition; and some municipalities have banned front-yard gardens as not meeting neighborhood standards of aesthetics. Some homeowners, however, have fought back. Florida ended up passing a law in July 2019 that prohibits towns from banning edible gardens for aesthetic reasons; and in California, a bill was passed in 2014 that allows yard use for “personal agriculture” (defined as “use of land where an individual cultivates edible plant crops for personal use or donation”). As noted in a Los Angeles Times op-ed:

The Legislature recognized that lawn care is resource intensive, with lawns being the largest irrigated crop in the United States offering no nutritional gain. Finding that 30% to 60% of residential water is used for watering lawns, the Legislature believes these resources could be allocated to more productive activities, including growing food, thus increasing access to healthy options for low-income individuals.”

Despite how large they loom in the American imagination, immaculate green lawns maintained by pesticides, herbicides and electric lawnmowers are a relatively recent cultural phenomenon in the United States. In the 1930s, chemicals were not recommended. Weeds were controlled either by pulling them by hand or by keeping chickens. Chemical use became popular only after World War II, and it has grown significantly since. According to the EPA, close to 80 million U.S. households spray 90 million pounds of pesticides and herbicides on their lawns each year. A 1999 study by the United States Geological Survey found that 99% of urban water streams contain pesticides, which pollute our drinking water and create serious health risks for wildlife, pets, and humans. Among other disorders, these chemicals are correlated with an increased risk of cancers, nervous system disorders, and a seven-fold increased risk of childhood leukemia.

That’s just the pollution in our water supply. Other problems with our lawn fetish are air and noise pollution generated by gas-powered lawn and garden equipment. The Environmental Protection Agency estimates that this equipment is responsible for 5% of U.S. air pollution. Americans use about 800 million gallons of gas per year just mowing their lawns.

Yet even people who recognize the downsides of lawnmowers and chemicals continue to use them, under pressure to keep up appearances for the sake of the neighborhood. That cultural bias could change, however, in the face of serious food shortages. And while yards left to dirt and weeds may be unsightly, well-maintained permaculture gardens are aesthetically appealing without the use of chemicals or mowing. The photo at the top of this post is of a dacha and the one below is of a Pennsylvania community garden, featured on the Neighborhood Gardens Trust website. 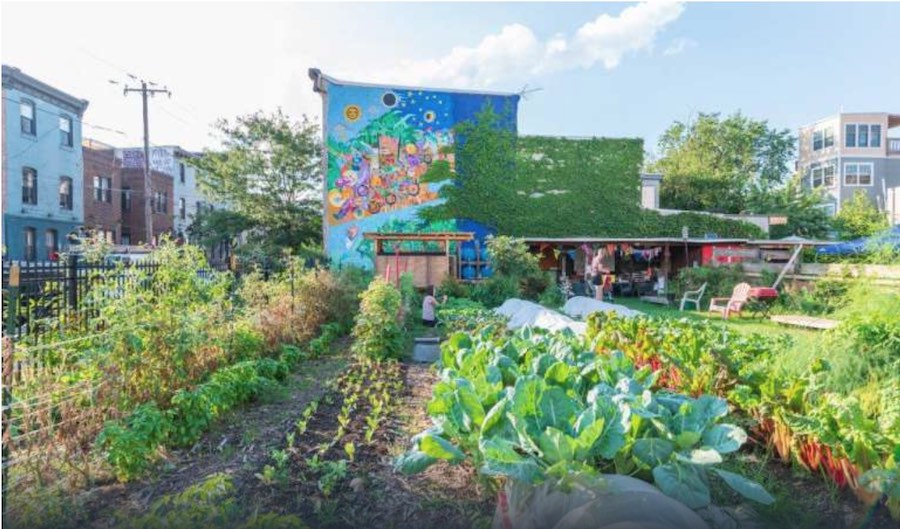 Local garden farming does not need chemical fertilizers or gas-guzzling machinery to thrive, as the Russian dacha farmers demonstrated. Dr. Sharashkin wrote in his 2008 doctoral thesis:

[T]he Soviet government had the policy of allowing dacha gardening only on marginal, unproductive, or overexploited lands that could not be used in state-run agriculture. And it is on exactly these lands that gardeners have consistently been producing large crops of vegetables and fruits ever since private gardens were re-authorized in 1941.… [M]ost of the gardeners grow their produce without chemical fertilizers.

When the practice [of industrial chemical use] subsided in the 1990s as the output of collective farming dwindled and was replaced by household production, significant abatement of environmental pollution with agrochemicals (especially that of watersheds) was observed.”

Most of Russia’s garden produce is grown not only without agrochemicals but without genetically modified seeds, which were banned in Russia in 2016. As Mitchel Cohen reports in Covert Action Magazine, some GMO use has crept back in, but a bill for a full ban on the cultivation of genetically modified crops is currently making its way through the Duma (the ruling Russian assembly).

Growing your own food conserves petroleum resources not only because it requires no tractors or other machinery but because it needn’t be hauled over long distances in trucks, trains or ships. Food travels 1,500 miles on average before it gets to your dinner table, and nutrients are lost in the process. Families who cannot afford the healthy but pricey organic food in the supermarket can grow their own.

Prof. Sharaskin noted that gardens also have psychological benefits. He cited studies showing that personal interaction with plants can reduce stress, fear and fatigue, and can lower blood pressure and muscle tension. Gardening also reconnects us with our neighbors and the earth. Sharaskin quotes Leo Tolstoy:  “One of the first and universally acknowledged preconditions for happiness is living in close contact with nature, i.e., living under the open sky, in the light of the sun, in the fresh air; interacting with the earth, plants, and animals.”

From crisis to opportunity

Today, people in the West are undergoing something similar to the “rape of Russia” at the hands of financial oligarchs. Oligarchical giants like Blackstone come to mind, along with “the Davos crowd” – that exclusive cartel of international bankers, big businessmen, media, and politicians meeting annually at the World Economic Forum (WEF) in Davos, Switzerland.

WEF founder Klaus Schwab has declared the current confluence of crises to be “a rare but narrow window of opportunity to reflect, reimagine, and reset our world.” It is also a rare but narrow opportunity for us, the disenfranchised, to reclaim our plundered assets – upgrading the economy in the service of the people and reimagining food systems on our own patches of land, however small.

This essay originally appeared on ScheerPost.com.

Ellen Brown is an attorney, founder of the Public Banking Institute, and author of thirteen books including the best-selling "Web of Debt". Her latest book is "Banking on the People: Democratizing Money in the Digital Age". Her 300+ blog articles are at EllenBrown.com.