You are here: Home / Economics of Happiness Conferences / Ten Years After the Crash: more of the same, or a new beginning? 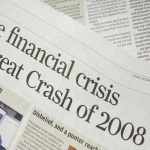 The year 2008 was a momentous one. The ‘anniversary’ headlines are of course all about the financial crash. As Nick Mathiason in The Guardian put it at the time: “It was the year the neo-liberal economic orthodoxy that ran the world for 30 years suffered a heart attack of epic proportions.” While the global establishment panicked, governments rallied round and got the flatlining monitor back up again by pumping in trillions of dollars to stop the world banking system from collapsing. The economic orthodoxy no longer looked like it had a long and healthy life ahead of it – and more and more people wondered if there was a better way.

Yet 2008 was far more momentous than just the year the stock market died and was resuscitated by those with too much to lose. It was also the year that Nicolas Sarkozy and Joseph Stiglitz set up their commission to look at the ways we measure progress, both economic and social. Their conclusions were a damning critique of the use of GDP growth as a proxy for societal success. Coming from a conservative president and a former chief economist at the World Bank, this was convention-shattering stuff.

Although GDP was developed as a tool during the Great Depression, governments did not become obsessed with GDP growth until after World War II. There was an urgent need for growth in Europe – to rebuild cities, communities and lives across the devastated continent. The connection between material needs and our capacity to thrive were clear – rubble strewn streets and rationed food are not easy playgrounds for happy and healthy lives.

GDP quickly became a catch-all way to understand if we were indeed ‘growing’ our financial health fast enough to mend our damaged world.  With the subsequent rise of neo-classical economics crowning the market as king, and the economic and political change that would put neo-liberal economics in charge of running the world, the primacy of the market became unquestioned and unregulated. It had become not just one way of running things, but ‘how things are’.

2008 seemed to herald the beginning of the end of this supremacy. Suddenly even those who felt they knew nothing about economics and politics were questioning how money could magically appear to rescue banks when poverty, social division and global warming were all ‘unavoidable’ and ‘un-fundable’ consequences of ‘how things are’.

Ten years on it seems little has changed. The implications of the 2008 crash are still being keenly felt by those at the bottom of the economic pile, while the wealth of those who arguably created the conditions for the crash has surged to a point where in 2017, a new billionaire was created every two days, the biggest increase in history. This increase could have ended global extreme poverty seven times over.  Added to this we appear to be having a similar meltdown of epic proportions in our political sphere. The logic of a world that puts profit before people or planet has birthed a political elite, comfortably sitting on their own huge wealth, dismantling the structures that give even the merest of hopes of ‘prosperity’ to citizens.

Yet just as in 2008 we saw the shoots of the new emerging amid the death of the old, so in 2018 can a field of new life be witnessed emerging. Since we at Happy City published our Thriving Places Index in February (an alternative to GDP as a measure of progress), we have been inundated with enquiries from the UK, Europe, Central and South America, Asia and Australasia. There is a thirst for a new way to do economics, politics and development and a hunger for solutions that create a better world, fast.

Thankfully we are not alone. The emergent Wellbeing Economy Alliance has brought together campaigners, activists and policymakers from around the world to support and amplify real momentum for change. They are working with pioneering nations who are leading the way, like New Zealand, where from 2019 the central government budget will be a wellbeing budget, and legislation is in place making the promotion of community wellbeing one of the two purposes of local government.

The New Economics Foundation, the Centre for Local Economic Strategies (CLES), New Economy and Social Innovation (NESI), Positive Money, the New Economy Organisers Network (NEON), Rethinking Economics, Local Futures and many, many others have been working tirelessly throughout the last decade to quietly build the capacity and tools needed for a new economy. Perhaps our time has now come. Just this autumn, the OECD is running a major event in South Korea on the Future of Wellbeing, and the Robert Johnstone Foundation and Rockefeller Institute are gathering global leaders on the topic of ’Advancing Wellbeing in an Inequitable World’.

If that sounds too ‘global’ and out-of-reach, Local Futures and Happy City are hosting an international-meets-local event in Bristol UK in October – one of an ongoing series of Economics of Happiness conferences organized by Local Futures. It will bring together world leaders in the field of new economics and wellbeing, with local activists and people building that new economy right now, on the ground, where they are around the world.

With the likes of the Global Parliament of Mayors annual meeting there to learn and share, Jonathan Dimbleby chairing discussions, and the BBC showcasing local food, the subject is finally being taken seriously – but it’s you and me who will ultimately be the midwives of a new economy. We need to gather together to learn our trade from each other in order to make sure 2018 is not just the beginning of the end, but the start of the beginning.

For permission to repost this or any other Local Futures blog, please contact [email protected]

Reading Tagore to Become Human
Why Growth Can’t be Green

Liz Zeidler is the founder and Executive Director of Happy City, a UK-based charity that promotes "a place-based model of change that puts the wellbeing of current and future generations centre stage."