Browse our online store’s collection of award-winning films, books, e-books and reports. Payment can be made by card or PayPal. If you have any questions or are experiencing difficulties ordering, please contact us. 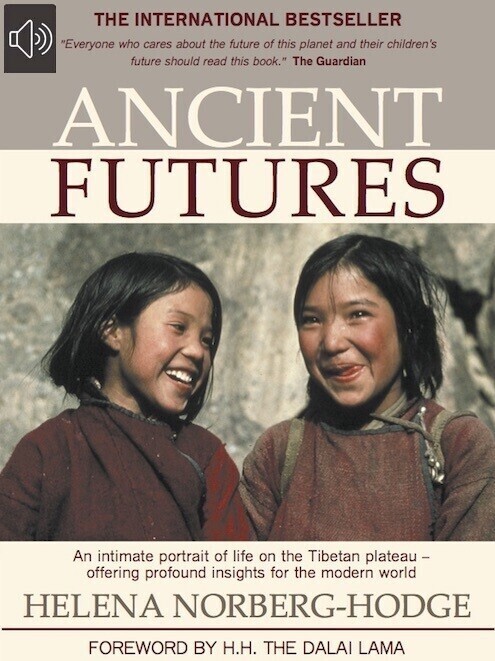 Let yourself be swept away to Ladakh, a region nestled high in the Himalayan plateau. It is a place like no other. The brightest sky makes snow-covered mountain peaks sparkle for miles. Below, scree tumbles down the mountain sides, infinite shades of ocher, into winding glacier-fed streams. The streams support a surrounding tapestry of vibrant green fields interspersed with stone houses, while on a nearby outcropping, a whitewashed monastery sits, overseeing the village, linking together land, people, mountains, and sky.

'Ancient Futures' is a lyrical and moving portrait of tradition and change in Ladakh, or “Little Tibet", as it was once known. The book is also an engaging critique of the global economy and a call for economic localization. When author, Helena Norberg-Hodge, first arrived in Ladakh in the 1970s, she found a pristine environment and a people who exhibited remarkable vitality and joy. Not long after, came economic growth and development and Norberg-Hodge watched how a whole range of problems—from polluted air and water to unemployment, religious conflict, eating disorders and youth suicide—began to appear for the first time.

Yet this is far from a story of despair. Social and environmental breakdown, Norberg-Hodge argues, is neither inevitable nor evolutionary, but the product of political and economic decisions—and those decisions can be changed. In a new Afterword for this audiobook, she contextualizes the current big-picture crises we face and the solutions each of us can be a part of. Norberg-Hodge also introduces us to a multitude of grassroots initiatives—a manifestation of a rapidly growing localization movement. She shows it is possible to reweave the local, the human-scale, and the place-based back into our lives, without terrible sacrifice, but rather to the benefit of all humans and nature. The story of Ladakh continues to serve as a source of inspiration to anyone interested in creating a better future.

'Ancient Futures' challenges us to redefine what a healthy society means and to find ways to carry centuries-old wisdom into our future. Along with a film of the same title, it has been translated into more than 40 languages.

Originally published in 1991 and second edition in 2016, this audiobook edition contains a newly written and narrated Introduction and Afterword by Helena Norberg-Hodge.

“Some books provide insights into our problems; others offer guidelines for a different future. Ancient Futures does both, brilliantly. A true classic.” - Bill McKibben

“Ancient Futures was a critical early warning about the social, spiritual and ecological costs of exporting ‘Western’ lifestyles to every corner of the globe.” - Naomi Klein

“Ancient Futures was a formative influence on my worldview. That it is still so relevant today shows how far ahead of its time it was.” - Charles Eisenstein

“Ancient Futures had a huge impact on the course of my life’s work. It shows us that another, better world is possible!” - Frances Moore Lappé

If you have any questions or are experiencing difficulties downloading the files, please contact us.

Save this product for later
Display prices in: USD