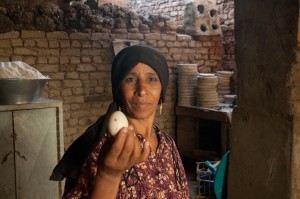 Ever since Bill Clinton and the World Bank enthusiastically embraced the microfinance concept in the 1990s, we at Local Futures have been skeptical of its benefits, seeing it as part of a whole package of “market solutions” to our social and environmental crises that, in the long run, make things much worse. We have pointed out that these loans often target rural populations who were not previously in debt: they represent the long arm of capitalism reaching into remote rural areas, encouraging a shift away from dependence on the land and the local community, towards competition in a resource-depleting global economy.

It has not been easy to oppose micro-credit: many well-intentioned grassroots activists have bought into the idea that giving ‘Third World’ women a loan would eradicate poverty and reduce population. This thinking was promoted with missionary zeal, and spread rapidly across the world. In trying to counter it, we have often felt like heretics. (One of the most difficult moments was when I was asked to debate Muhammad Yunus, the founder of the Grameen Bank, at the height of his popularity, on BBC radio.)

For this reason we’re very happy to see this article by Jason Hickel, a professor of anthropology at the London School of Economics, in the UK Guardian: The microfinance delusion: who really wins? As Hickel says, “microfinance usually makes poverty worse”, because the vast majority of microfinance loans are used to fund the purchase of consumer goods that the borrowers simply can’t afford: “they end up taking out new loans to repay the old ones, wrapping themselves in layers of debt.” Even when used to finance a small business, the most likely outcome is that the new businesses fail, which leads to “vicious cycles of over-indebtedness that drive borrowers even further into poverty.” The only winners are the lenders, many of whom charge exorbitant interest rates. Hickel concludes that “microfinance has become a socially acceptable mechanism for extracting wealth and resources from poor people.”

We would argue that there are other winners in what Hickel calls “the microfinance game”. Corporate interests of all stripes have a vested interest in seeing millions of people drawn more deeply into the debt-based globalized money economy. Interestingly, at the bottom of the webpage where Hickel’s article appears there are links to articles sponsored by the credit card giant Visa, all of them urging more “financial inclusion” in the global South – in other words, bringing more people into the economic system that corporate interests like Visa dominate. “Helping the world’s one billion unbanked women” turns out to be about how “more than 200 million women lack access to a mobile phone, meaning they’re excluded from digital banking opportunities.” Another article argues that one of the greatest challenges facing policymakers involves “providing some 2.5 billion people with access to formal financial services.”

This is propaganda, pure and simple: it is part of a drumbeat coming from think-tanks and corporate-friendly pundits that have been very effective in convincing people – including well-meaning philanthropists and activists – that the solution to global poverty requires pulling ever more people into the global economic system. That system is failing the majority even in the “wealthy” countries, while spurring rampant consumerism and unsustainable resource use worldwide.

The solutions to our many crises – including poverty – will not come from a global marketplace rigged by de-regulatory trade treaties to favor the biggest multinational corporations. They depend on preventing further deregulation of global corporations, while shifting towards more localized economies in which people can have real control over their own lives.

A Tribute to Eduardo Galeano
We are all Greece