You are here: Home / Climate Change / Resisting the Technocratic Paradigm 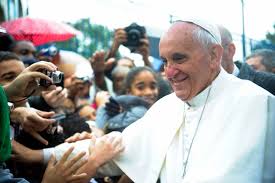 Ever since the release of Pope Francis’ encyclical, Laudato Si’, people in our circles have been waxing rhapsodic about its message: finally, a powerful global figure is explicitly calling for fundamental structural change.

Unfortunately, the media has pigeon-holed the encyclical as a “climate change” document, and so Francis’ deep and broad critique of the modern economic system – with particular emphasis on its links to reductionist science and technology – isn’t getting the attention it deserves.

This is not surprising. In America today, people are glued to screens and obsessed with their devices; they readily admit to being “internet addicts”, and treat technology icons like Bill Gates and the late Steve Jobs as reverently as, well, the Pope. With media, advertising and Wall Street continually whipping up enthusiasm for the next big thing, it is rare indeed to hear a fundamental questioning of the direction big business has taken science and technology. For this reason alone it’s worth looking at Francis’ words in some detail.

Laudato Si’ sets the stage with a Buddha-like acknowledgement – one that is repeated again and again – that “everything in the world is interconnected”.  The interconnectedness of all life is contrasted with a scientific paradigm based on reductionism – on eliminating or ‘controlling’ outside influences so that bits of matter can be studied in isolation. While this approach has led to stunning technical advances, Francis points out that “The specialization which belongs to technology makes it difficult to see the larger picture. The fragmentation of knowledge … often leads to a loss of appreciation for the whole, for the relationships between things, and for the broader horizon.” The knowledge that results, he says, “can actually become a form of ignorance.”

This is not just a problem for our understanding of how Nature works, but for “every aspect of human and social life”. A reductionist approach leads us to believe that the solution to insect pests is ever more powerful pesticides; that the solution to Islamist insurgencies is drone strikes against jihadist leaders; that the solution to virtually every societal ill is economic growth. A broad perspective makes it clear that all these “solutions” create more problems than they solve.

As Francis sees it, the reductionist worldview not only lies behind the many environmental crises we face, it also constrains our response: “Technology… linked to business interests, is presented as the only way of solving these problems.” This approach, he warns, is doomed to fail since it ignores the global system at the root of the problem: “To seek only a technical remedy to each environmental problem which comes up is to separate what is in reality interconnected and to mask the true and deepest problems of the global system.”

One particularly disastrous product of this fragmented worldview “is the idea of infinite or unlimited growth, which proves so attractive to economists, financiers and experts in technology. It is based on the lie that there is an infinite supply of the earth’s goods, and this leads to the planet being squeezed dry beyond every limit.”

Pope Francis doesn’t mince words when it comes to the disastrous marriage between a reductionist worldview and the corporate-led global economy: “The alliance between the economy and technology ends up sidelining anything unrelated to its immediate interests.  Consequently the most one can expect is superficial rhetoric, sporadic acts of philanthropy and perfunctory expressions of concern for the environment.”

Francis roundly rejects the argument that technologies are neither intrinsically good nor bad, and that it all depends on the uses to which they are put: “We have to accept that technological products are not neutral, for they create a framework which ends up conditioning lifestyles and shaping social possibilities along the lines dictated by the interests of certain powerful groups. Decisions which may seem purely instrumental are in reality decisions about the kind of society we want to build.”

This is particularly so given the tremendous power of many new technologies: “Nuclear energy, biotechnology, information technology, knowledge of our DNA, and many other abilities which we have acquired… have given those with the knowledge, and especially the economic resources to use them, an impressive dominance over the whole of humanity and the entire world.” Unfortunately, we can’t expect that power to be used responsibly: “The economy accepts every advance in technology with a view to profit, without concern for its potentially negative impact on human beings.”

One example of this is the impact on workers and their livelihoods: “the orientation of the economy has favored a kind of technological progress in which the costs of production are reduced by laying off workers and replacing them with machines.” For Francis the unemployment that results is not only an economic problem, but a spiritual one: “Work is a necessity, part of the meaning of life on this earth, a path to growth, human development and personal fulfillment.”

The spiritual vacuum of modern life is worsened by consumerism, another arena in which technology and the global economy are closely entwined: “our megastructures and drab apartment blocks express the spirit of globalized technology, where a constant flood of new products coexists with a tedious monotony. Let us refuse to resign ourselves to this…. Otherwise we would simply legitimate the present situation and need new forms of escapism to help us endure the emptiness.”

Francis is similarly concerned about the effects of digital media: “when media and the digital world become omnipresent, their influence can stop people from learning how to live wisely, to think deeply and to love generously…. they also shield us from direct contact with the pain, the fears and the joys of others and the complexity of their personal experiences.” Aware, perhaps, of the many studies showing a link between screen time and depression, he notes that media-dependence can lead to “a deep and melancholic dissatisfaction with interpersonal relations, or a harmful sense of isolation.”

With the promises of technology proving hollow, “People no longer seem to believe in a happy future…. There is a growing awareness that scientific and technological progress cannot be equated with the progress of humanity and history, a growing sense that the way to a better future lies elsewhere.” And yet voicing strong misgivings about technology is all but taboo in modern societies, as Francis is well aware: “Whenever these questions are raised, some react by accusing others of irrationally attempting to stand in the way of progress and human development…. [But] a technological and economic development which does not leave in its wake a better world and an integrally higher quality of life cannot be considered progress. Frequently, in fact, people’s quality of life actually diminishes.”

What does Francis suggest we do?

In part, the solution involves seeing the technological worldview as one of the root causes of our current crises, and working to resist it. We need, he says, “policies, an educational program, a lifestyle and a spirituality which together generate resistance to the assault of the technocratic paradigm.”

Francis also believes that, rather than leaving decisions about technology to market forces, people must push for smaller-scale and less damaging technologies: “We have the freedom needed to limit and direct technology; we can put it at the service of another type of progress, one which is healthier, more human, more social, more integral.” As an example, he cites small-scale, localized initiatives: “Liberation from the dominant technocratic paradigm does in fact happen sometimes, for example, when cooperatives of small producers adopt less polluting means of production, and opt for a non-consumerist model of life, recreation and community.”

Despite the power of the techno-economic forces he critiques, Francis remains guardedly optimistic: “An authentic humanity, calling for a new synthesis, seems to dwell in the midst of our technological culture, almost unnoticed, like a mist seeping gently beneath a closed door.” He questions whether the era of technological dominance can continue, “with all that is authentic rising up in stubborn resistance.”

If the Pope continues to use his compassion, his intellect and his moral authority in support of “all that is authentic”, then the door to a new synthesis may yet swing wide open.