You are here: Home / Our Projects / Our Work in Ladakh / Women’s Alliance of Ladakh

“Only a few years ago women were considered backward and ignorant. Now we’re respected as one of the most influential voices in Ladakh.”

As in other parts of the world, the new economic pressures in Ladakh have marginalised women, who tend to be left behind on the farm as men and young people flock to the city in search of jobs and schooling. Women’s decision-making power decreases while their work load increases. 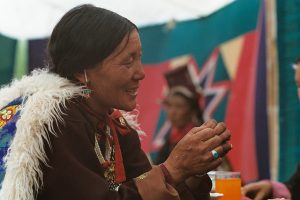 In 1994, Local Futures helped to establish the Women’s Alliance of Ladakh (WAL), with the twin goals of raising the status of rural women and strengthening local culture and agriculture. Since then, WAL’s membership has swelled to over 6,000 women from almost 100 different villages.