You are here: Home / Our Projects / Ladakh Project / Local Futures’ History in Ladakh

Set deep in the Indian Himalayas on the western edge of the Tibetan plateau, Ladakh, or “Little Tibet”, is one of the highest and driest inhabited places on earth. Yet for centuries it was home to a rich and self-sustaining culture. Then, in the 1970s, came ‘development,’ which undermined the local economy and eroded cultural self-esteem. The result has been increasing community and family breakdown, unemployment, sprawling urban slums and pollution.

Since 1978, Local Futures has been working with Ladakhis to critically examine the impact of conventional development in other parts of the world, while exploring more sustainable patterns of development in Ladakh itself, based on the use of local knowledge and resources. Local Futures has helped to establish and still collaborates with several important indigenous organizations in Ladakh, including the Ladakh Ecological Development Group (LEDeG), the Women’s Alliance of Ladakh, the Amchi Association, and the Ladakh Environment and Health Organisation (LEHO). LEDeG became the most influential non-governmental organization in the region and its Ecology Centre was inaugurated by Indira Gandhi in 1984 and consecrated by His Holiness the Dalai Lama. We ended up working in about 80 villages throughout the whole region. In the 1990’s, a semi-independent government was set up by leaders from our ecology group, with virtually identical goals to those of LEDeG.

Over the past four decades our work in Ladakh has also included hosting a wide range of meetings, from hands-on village workshops to international conferences. We have produced community theater, radio shows, Ladakhi language schoolbooks, the first Ladakhi-English dictionary, and an educational comic book, A Journey to New York, that has been used in schools throughout Ladakh.

Local Futures has also supported farmers in resisting the pressures of industrialized agriculture. We have organized tours for Ladakhi farmers to visit sustainable farms in other parts of South Asia and abroad, supported local campaigns about the hazards of pesticides and chemical fertilizers, and introduced solar greenhouses that enable villagers to grow vegetables year round.

We have painted a fuller picture of modern urban life, sharing information about the serious problems of crime, unemployment, loneliness, and alienation in the West. At the same time we have highlighted the various movements that seek to strengthen local economies and community, regenerate healthier agriculture, and foster a deeper connection to the living world.

As a means of tempering some of the idealized impressions of the industrialized world that come from advertising and the media, we have also run “reality tours” that bring Ladakhi leaders to the west to see firsthand the darker side of the consumer culture, as well as initiatives underway to make western societies more sustainable. Through this process, we have painted a fuller picture of modern urban life, sharing information about the serious problems of crime, unemployment, loneliness, and alienation in the West. 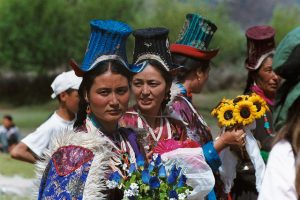 We have been able to highlight examples of people who had come to realize the emptiness and destructive nature of the urban consumer culture. The Ladakhis could hear from people about our spiritual, psychological, ecological and economic problems. At the same time we have highlighted the various movements that seek to strengthen local economies and community, regenerate healthier agriculture, and foster a deeper connection to the living world. The deeper dialogue between Westerners and Ladakhis led to the recognition that Ladakh, like other traditional, land-based communities, had a lot to offer these Western movements. This in turn helped young Ladakhis regain greater respect for their culture. A reality tour to London for two Ladakhi women was the focus of the documentary film Paradise With Side Effects.

The following articles provide more information about the negative impacts  of development in Ladakh, as well as our work to counter them:

Find out more about our Mindful Futures workshops, Help with the Harvest and other projects.

Read here about our Global to Local workshop and Media Literacy and Filmmaking workshop.

Read more about our Mindful Futures workshops, Learning from Ladakh program and more…