You are here: Home / Our Projects / Our Work in Ladakh / Experiences in Ladakh 2019

The 2019 Ladakh Project was once again brimming with activity, from workshops to daily film screenings and discussions to harvesting in villages and finally, with the inspiring 21st International Economics of Happiness conference.

The capstone of this year’s Ladakh Project, the 21st Economics of Happiness Conference took place on the 20th-21st of September at the Central Institute of Buddhist Studies (CIBS), jointly hosted by the Ladakh Autonomous Hill Development Council, the CIBS, Local Futures, Julay Ladakh, and the Himalayan Film House.

The first day of the conference, September 20th, coincided with the International Climate Strike calling on people everywhere to demonstrate in demand of strong and urgent action on the climate crisis. Conference participants and speakers showed their solidarity by assembling on the steps of the CIBS auditorium with signs calling for “system change, not climate change.”

With hundreds of participants – Ladakhi, Indian and foreign – during the two days, the conference provided an opportunity and a platform for networking and mutual learning between local Ladakhis and guests from outside with a rich pool of inspiring plenary sessions, issue-specific workshops, and stalls by environmental and cultural preservation NGOs and local Ladakhi food enterprises.

International luminaries including Local Futures Founder/Director Helena Norberg-Hodge and Satish Kumar – peace and environmental activist, and founder of Resurgence magazine and Schumacher College in the UK – inspired the audience with impassioned talks about the importance of reweaving community and compassionate re-connection between humans and the Earth.

For a full report of the conference, read here:
Report by Alex Jensen – Project Coordinator

For more information, photos and videos, visit our conference page:

In late July, Local Futures joined with local Ladakhi group Flowering Dharma, for the 3rd consecutive year in a row to organize ‘Mindful Futures’, a 4-day residential workshop for Ladakhi youth looking at contemporary social and environmental challenges, as well as locally-based, sustainable solutions. Some 30 young people, ranging from 14 years old to late-20s from all regions of Ladakh (including one from as far afield as Kargil) enthusiastically participated.

Responding to the emerging problems in Ladakh like the deterioration of mental health amongst youth, the theme of this year’s workshop was ‘Reweaving the Fabric of Community’. The role of the globalised economy, consumerism, advertising and other political-economic factors in worsening mental health trends was examined during the first two days, pivoting on day three to look at the importance of re-buidling localized, cooperative and sustainable economies and livelihoods to begin to arrest and reverse the social isolation and environmental breakdown tearing at Ladakh today.

Young local entrepreneurs who have started traditional, local Ladakhi food restaurants, and a member of a passive-solar, earthen building design company shared their inspirations, motivations, and learnings with the participants. On the 3rd day, we traveled to the village of Gya to meet an organic farmer there and hear from him about his farming philosophy and approach, camping out in a field next to his house. The following day, we engaged in hands-on work trying out the various stages of woolen fabric-making, from carding and spinning to weaving locally-sheared sheep’s wool. The participants took to this part of the workshop with an encouraging level of gusto.

The workshop was graced by the presence of renowned Tibetan philosopher, spiritual leader and longtime friend of Local Futures, Samdhong Rinpoche, who delivered two talks full of profound wisdom – one exclusively for the participants of Mindful Futures, another open to the public. In both talks, Rinpoche provided a scathing critique of the values taught by the modern education system and media, the structural violence inherent in mainstream capitalist economics, and the urgent need for systemic alternatives based in compassion and tolerance.

Help with the Harvest

From mid-August to mid-September we organized a core group of volunteers to travel to villages to live and work on the harvest with local families. This is a very meaningful program for both the participants and the hosts, hitting all the notes of well-being: connection to other people and nature; vigorous physical activity; meaningful work; laughing, singing, cooking and eating together; clean air, water, soil; beauty/awe; and sense of belonging and purpose.

The host families of course benefit from the free labor where otherwise labor must be hired for numerous days. The fact that native labor/family members are so scarce, including children, is a tragedy that our project is in no way intending to make up for or inadvertently facilitate. Rather, we are simply recognizing and responding to the present reality caused by systemic factors, and facilitating the sort of deep intercultural exchange that characterizes Local Futures’ work in Ladakh since its beginnings.

In early August, Local Futures participated as a co-sponsor of the Little Tibet Film Festival, organized by alternative travel enterprise and community space, Tendrel, where our films Ancient Futures, Economics of Happiness, and Mindful Travel in Ladakh were screened two times each, to enthusiastic reception by mixed international, Indian and Ladakhi audiences.

Local Futures staff was invited multiple times to screen films, lead discussions and conduct full-day workshops for the Naropa Fellowship, a 9-month program in social entrepreneurship for youth from across Ladakh, the Himalayan region, and from other parts of India. These interactions were very enthusiastically received, with many of the fellows seeking follow-up meetings and guidance for their projects from Local Futures staff. Two fellows from the first batch were hired by us for short-term employment for the season, and were invaluable in running our programs and organizing our Economics of Happiness conference. 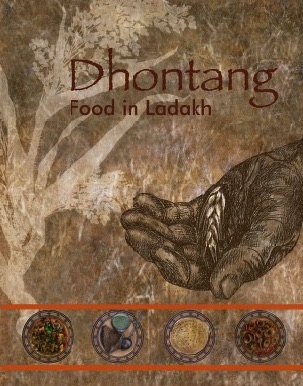 This summer, Local Futures co-published a new book titled Dhontang: Food in Ladakh, with the Central Institute of Buddhist Studies in collaboration with the organizations Snow Leopard Conservancy and Kalpavriksh. The book surveys the traditions, changes, challenges and new initiatives for a sustainable food future in Ladakh, and is intended mainly though not exclusively for Ladakhi youth.

The book was formally launched by Satish Kumar at the Economics of Happiness conference on September 21st. Ladakh Project Coordinator Alex Jensen was one of the co-authors and editors of the book, contributing the Introduction and a chapter on Food and Environment.

Dhontang: Food in Ladakh is available at the office of Snow Leopard Conservancy, and the centre of the Ladakh Arts and Media Organization, as well as in select local book stores in Leh.

Find out more about the conference program, speakers, partners, photos and videos.

Our Project Coordinator Alex Jensen reflects on the 21st Economics of Happiness Conference in Ladakh.