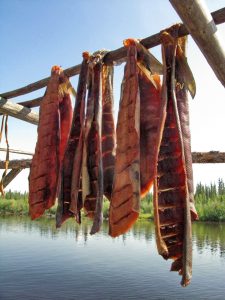 For over a hundred years, and up until 1996, First Nations young people all over Canada were taken from their homes — often by force — and put into residential schools designed to disconnect them from their lands, families, languages, spiritual traditions, and history.

In 2008, the Canadian government officially “apologized” for this wrong. And yet indigenous children today are still required to attend Western-style schools, where the political theories, spiritual philosophies, languages and practical skills that once would have been learned from families and elders will be forgotten. This not only ensures dependence on the global consumer economy, it makes it far easier for oil, mining and logging companies to take control of indigenous lands and effectively destroy them.

The Dechinta Centre for Research and Learning was founded in an effort to reverse this process. According to Glen Coulthard, a Weledeh Dene and professor at both Dechinta and the University of British Columbia, colonization involved a violent separation of indigenous peoples from their relationship with the land. He adds that efforts aimed at decolonization must fundamentally correct that violence, and “one of the best ways to go about doing so is to reintroduce and re-place Indigenous peoples on their lands, with the knowledge holders that are experts in those practices.”

Though Dechinta is accredited by the University of Alberta, the school’s approach goes beyond merely incorporating Indigenous knowledge into existing school curricula. As faculty member Leanne Betasamosake Simpson explains: “Indigenous education is not Indigenous or education from within our intellectual traditions unless it comes through the land, unless it occurs in an Indigenous context using Indigenous processes.”

Courses at Dechinta all take place at a remote off-the-grid lodge — accessible only by bush plane, snowmobile or dog team — near Yellowknife, the capital of the Northwest Territories and the home of the Dene people. As Coulthard explains, Dechinta is “a post-secondary program of Indigenous land-based education … It works with Elders from our community – and other community members and knowledge holders – in order to re-embed students in the social relations that are embodied by land and place, in order to provide that framework for decolonization.”

Dechinta offers several programs, including a semester course that students can take in one or multiple seasons of the year (skills learned are dependent on the season); a teacher’s course for Northern educators; and short professional development programs focusing on topics such as governance, sustainable development, and community- based participatory research methodology. Admission standards for Dechinta are different from those typically used within mainstream academia: “Entrance is based on interviews by the advisory circle; admission requirements are based on life-experience, willingness to learn and dedication.”

It is important that everything at Dechinta — from political discussions to stories, from philosophy to practical skills — is embedded both in the land as a context, and in the Dene way of thinking about and moving through the world. And though this may not groom students for success by the colonizer’s definition, the hope is that it will help to create self-sufficient individuals who do not accept the exploitation of land and people as a matter of course.

Speaking of her own people, the Nishnaabeg (whose lands lie to the south of Yellowknife) Leanne Simpson says that their indigenous system of education “does not prepare children for successful career paths in a hyper-capitalistic system. It is designed to create self-motivated, self-directed, community-minded, inter-dependent, brilliant, loving citizens, who at their core uphold our ideals around family, community and nationhood by valuing their intelligences, their diversity, their desires and gifts and their lived experiences…. . But don’t our children have to live in a hyper- capitalistic system? Well, yes; and if we are going to survive this as Nishnaabeg, we need to create generations of people that are capable of actualizing radical decolonization, diversity, transformation and local economic alternatives to capitalism.”

To learn more about Dechinta, visit: http://dechinta.ca. Quotes were taken from an interview with Glen Coulthard and Leanne Betasamosake Simpson that can be found here, as well as from Land as pedagogy: Nishnaabeg intelligence and rebellious transformation.

Dechinta Centre for Research and Learning