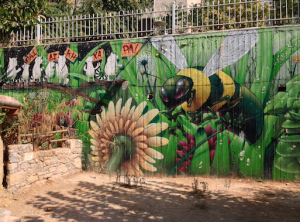 Ever since 2008, it has been widely reported that Greece is in complete economic collapse. But the Greek economic crisis has also provided the people of Athens with a rare opportunity to step outside of the global economy – to come together to revitalize communities, share resources and re-shape public spaces to serve their own needs, rather than the needs of big business and commerce.

As Helena Smith of the Guardian writes, “Public buildings – from abandoned municipal offices to theatres, market places and cafes – have been squatted and taken over. An unofficial support network has evolved with self-managed health clinics, collective kitchens, neighborhood assemblies, community groups and language schools mushrooming … At last count there were over 400.” Giorgos Kaminis, Athens’ progressive mayor, has even created a municipal post — Vice Mayor for Civil Society and Municipality Decentralisation — to help foster these kinds of community initiatives. Former documentary-maker Amalia Zepou, who currently holds the post, has created SynAthina, a platform for community projects, where citizens can “exchange information, find partners, and get in touch with city hall and potential sponsors.”

One exciting example of the kind of community initiative currently thriving in Athens is Navarinou in the Exarcheia district – just a few streets from where a teenage boy was shot by police during the 2008 riots.

Navarinou was founded in 2009, when neighborhood residents occupied a parking lot slated for the construction of private office buildings, and claimed it as a green space. Almost immediately they broke through the concrete and began planting vegetable gardens and trees. From the beginning, all decisions were made collectively; the park is still run by a neighborhood committee, which maintains a busy schedule of public debates, films, children’s activities and urban gardening workshops. In Navarinou, citizens are overcoming the challenges of economic collapse “by creating a place where, self-contained and seemingly beyond the reach of authority, they can meet, converse, play and produce food.”

Another project made possible by occupying space threatened with privatization is the Social Cultural Centre of Vyronas. Established for the good of “workers, the unemployed, pensioners, migrants and youth,” the centre’s charter declares: “We put human needs above commerce and business interests. [Our] basic aim is the revitalization of the neighbourhood’s social fabric in a way that puts collective enquiry and action above individualism, egotism, indifference.” The Centre hosts everything from guitar, photography and tai chi lessons to a public library and collective kitchen.

Nikos Greets, one of the Centre’s founders, says: “It’s our answer to the crisis. We don’t care about politics. There are leftists here, trade unionists, people from all the parties, who have united for the common good.”

To learn more about these projects read: Athens’ unofficial community initiatives offer hope after government failures, by Helena Smith (all quotes are from this article). More information on Navarinou can be found here.

We know that there are many other wonderful projects happening throughout Greece. If you are part of or know about any that you think we should feature, please send details to [email protected].