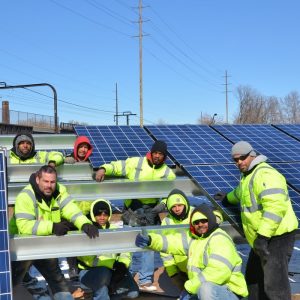 The Evergreen Cooperative Initiative, in Cleveland, Ohio (USA), is an inspiring example of community-based economic revitalization in action. The overarching purpose of the Evergreen Initiative is to reduce poverty and inequality by building community wealth, democratizing ownership, and creating local green jobs for residents of one of the city’s high-unemployment, low-income neighborhoods.

From their website: “Rather than a trickle down strategy, [The Evergreen Cooperative Initiative] focuses on economic inclusion and building a local economy from the ground up; rather than offering public subsidy to induce corporations to bring what are often low-wage jobs into the city, the Evergreen strategy is catalyzing new businesses that are owned by their employees…”

Evergreen’s basic strategy is to create a network of worker-owned cooperatives, each meeting a specific procurement need (goods or services) of local ‘anchor institutions’, such as universities and hospitals. A local non-profit helps raise the initial capital needed to create the co-ops, provides technical assistance, and makes sure the community’s broader interests are represented in the cooperatives’ decisions. Once profitable, each new co-op contributes a portion of its surplus to an innovative revolving fund that helps capitalize the next wave of enterprises.

In the boom and bust context of corporate globalization, one of the initiative’s primary goals is to help stabilize the local economy. It achieves this by creating enterprises firmly rooted to their communities, both because they’re owned by workers who live their, and because the institutions they sell to are anchored locally in a way that large, footloose corporations are not. Since its founding in 2008, three successful cooperatives have been launched: a green laundry service company, Evergreen Laundry; a renewable energy service cooperative, Evergreen Energy Solutions; and a local food cooperative, Green City Growers.