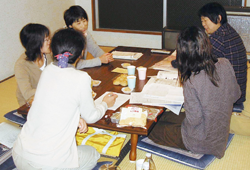 In 1965, a group of 200 Tokyo women – tired of getting low-quality milk at unaffordable prices from the large milk companies that dominated the dairy market – banded together to create a collective purchasing club, the Seikatsu Club. The Club’s first order was a modest 300 bottles of milk, but its members gradually expanded the products they purchased to include a range of food staples and other consumer goods.

From this humble beginning, the Seikatsu Club has grown into a federation of 32 cooperatives with nearly 350,000 members (over 90% of them women), an annual turnover of US $1 billion, and accumulated member equity of $459 million. Despite its size, the Seikatsu Club has maintained a decentralized structure to facilitate more human-scale, face-to-face interaction between members and producers. Each co-op is divided into autonomous local branches that are further divided into neighborhood units called han – 8-10 households where orders are prepared and eventually combined with other orders at the local branch. There are 200 autonomous branches and many thousand han.

The original vision of the Seikatsu Club was much broader than simply accessing quality local food at affordable prices: the women sought to demonstrate an alternative way of life beyond the economy of mass consumption and mass production – and they’ve succeeded. The Seikatsu Club has been a champion of chemical-free and non-GMO foods, waste reduction, local agriculture, community self-reliance, mutual aid, and member participation.

In addition to starting several dairies and helping to launch more than 600 worker cooperatives (employing more than 17,000 people), it has pioneered a number of means to link producers and consumers – including Community Supported Agriculture, known as teikei in Japan. The Seikatsu Club has also helped to elect over 140 co-op members to local government. Because most of its members are women, the network has been instrumental in elevating the role of women in Japanese politics.

The Seikatsu Club demonstrates the tremendous impact that ordinary citizens can make when they join together for political and economic change; it is living proof that a more people-centered and ecological economy is possible.

To learn more, visit the Seikatsu website, or read AsiaDHRRA’s profile of their work.