It’s hard to imagine bedfellows as unlikely as a motorcycle gang and sustainable small-scale farmers. But Geng Motor Imut (GMI), based in the small East Indonesian city of Kupang, is showing the world that such a partnership makes a surprising amount of sense. GMI began with six students from a local university who wanted to use their knowledge of sustainable agriculture and animal husbandry to benefit small farmers in a fun and adventurous way. 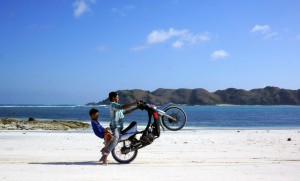 GMI has helped over 90 farmers throughout the region, many of whom do not own their own land and are struggling to deal with price shocks and volatile weather patterns, while being pressured to adopt expensive agricultural technologies. GMI uses all proceeds from sales of their cheap, human-scale technology to fund activities including advocacy, community events, and a sustainable agriculture program in the local juvenile detention center, which helps inmates gain farming skills and knowledge to fall back on when they are released. Far from your average motorcycle gang, Geng Motor Imut has become an influential network for strengthening community ties among farmers, and promoting ecologically-sound practices.