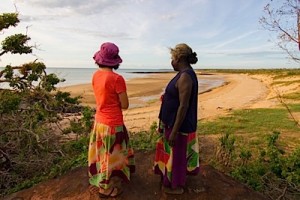 The story of Hope for Health began in 2013, when Dianne Biritjalawuy, an Indigenous Yolngu resident of Australia’s Elcho Island, recovered from a serious health crisis by turning away from processed, store-bought food and returning to a more traditional diet. The experience was so transformative that Dianne raised AU$60,000 to bring twelve Yolngu women to a local health retreat, where they, too, experienced dramatic improvements in chronic health problems, and discovered a new vitality. Most recently, in August 2015, the cross-cultural education group Why Warriors, which aims to bridge the cultural gaps between Indigenous and non-Indigenous Australians, received grant money to train local Yolngu as nutrition and exercise coaches. These women are now providing the community with local-language workshops and classes in cooking and health, all based on the Yolngu traditional diet. They are also working to establish a Hope for Health Centre, which will sell locally-produced foods and teach traditional methods of food preparation, thus providing opportunities that can help empower the entire Yolngu community. To learn more, visit the Hope for Health website.