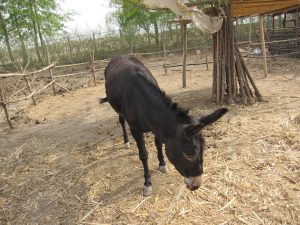 Little Donkey is a diversified organic farm and the first community supported agriculture (CSA) farm in China. Located in a village just northwest of Beijing, Little Donkey Farm’s CSA has hundreds of members, while several hundred more families rent small plots of land from the farm on which to plant their own gardens. The government agenda in the region has been to convince people to leave their villages and farms for work in cities and factories. Little Donkey is moving against the tide by emphasizing the importance of sustainable agriculture, and of holding on to traditional farming knowledge.

But it’s not only the fresh organic food or the educational opportunities, that bring people to Little Donkey. “It’s mostly for relaxing,” said Gao Xiang, whose family leaves the city on weekends to visit the garden plot they share. Another member, Fang Danmin, explained: “Little Donkey Farm isn’t just the land, or the food. We can know each other and create new ideas. We make friends here. It’s small, but it’s a trend.”

In a country where chemical-fueled industrial agriculture is often touted as the only way to feed the increasingly urbanized population, we hope Little Donkey’s alternative model for the future — one that respects human health, happiness and the health of the planet — does indeed set a trend.

To learn more, listen to the NPR story How Community Supported Agriculture Sprouted In China.