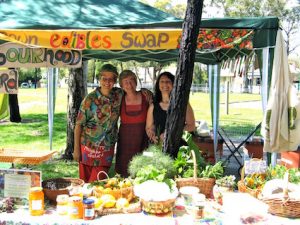 Although 89% of Australians live in cities or towns rather than on farmlands, Australia’s typical huge suburban house lots have enabled a tradition of home-grown produce. And over time, even in the high-density living of the inner-cities, more and more people have taken to growing at least some of their food at home. Australia is not only one of the most urbanized nations on earth, it is also one of the most multi-cultural, so home-produced food is richly diverse and often meant to be shared.

Perhaps with that background it is no surprise that Australians have been at the forefront of the Food Swap movement, where sharing becomes rather more formalized as groups of locals come together by arrangement to exchange excess produce. The Fitzroy Urban Harvest is one inspiring example.

Every month, at a local park in Melbourne’s inner-city suburb of Fitzroy, people meet to exchange not only produce, but seeds, cuttings, eggs, jam, chutney, flowers, jars, recipes and gardening tips. There is no money involved and no proviso that participants should take the equivalent of what they contribute. Rather, people are encouraged to take what they want.

As well as reducing waste and saving money spent on food, swaps have other advantages. They provide an opportunity for residents to get to know their neighbors and to build community links. And of course food grown right where you live is likely to be fresh, seasonal, and often organic, with wonderfully low/zero food miles.

We encourage everyone with extra produce in the garden to investigate local food swaps, or consider starting one of their own!

To learn more about The Fitzroy Urban Harvest or to connect with other similar projects throughout Australia, visit their Facebook page.