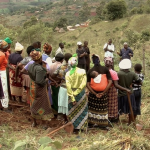 In just two decades, the Chikukwa Ecological Land Use Community Trust (CELUCT) has transformed six villages in Eastern Zimbabwe, from a state of chronic food insecurity and severe environmental degradation, to one of food sufficiency, community self-reliance, and ecological regeneration. When the project was initiated in 1991, village water wells were filled with silt, the creeks had run dry, farmland was heavily eroded, and the surrounding vegetation had all but disappeared from overgrazing and deforestation.

As a result, farm productivity was low, and hunger and malnutrition were prevalent. Given this dire situation, it’s hard to believe that present day Chikukwa villages are once again verdant and fertile places, a far cry from the barren landscape of 20 years ago. Thanks to the organization’s many initiatives, creeks have returned to supply water to the villagers, soil has regenerated, hillside vegetation has been restored, and sustainably-managed woodlots and grazing areas have been established. Significantly, hunger and malnutrition have declined as the landscape has regenerated, with food surpluses now common.

There are several noteworthy aspects of this project. First, it has always been led by community members rather than imposed top-down by an external development agency. Second, unlike conventional market-oriented development initiatives, CELUCT has prioritized local production to meet local needs, with commercial, income-generating activities treated as a secondary priority.

In the context of a currency inflation crisis in 2005, and an urban commercial economy that has failed to produce sufficient employment, the focus on strengthening rural subsistence economies has been fundamental to its success.

Finally, the Project’s training programs in permaculture have been complemented by other capacity building initiatives focused on conflict resolution, women’s empowerment, health issues, local education, specialized skill development, and more. This holistic approach has been critical to the dramatic transformation of the villages.

To learn more about CELUCT, read this article and watch the film The Chikukwa Project.