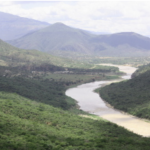 In the Venda language, Mupo describes all the natural creations of the universe. This includes soil, seeds, plants, all animals and human beings, the sound of the wind and running water, the feeling of the air, the light of the stars. In other words, says Mphatheleni Makaulule, a founder of Mupo Foundation, “Mupo is life,” and the people cannot be healthy if Mupo is not healthy.

The Indigenous Venda people live mostly in the Vhembe District of the Limpopo province, in the far north of South Africa. In terms of cash income the region is poor, with high rates of unemployment; at the same time, it is a lush place of waterfalls, mountains, clear rivers, diverse forests full of edible and medicinal plants, and many sites sacred to the Venda.

But Vhembe District has also been targeted for plantation expansion, coal mining, and tourist industry development. Ever since the Apartheid era, when white farmers replaced Indigenous forests with paper plantations based on monoculture and chemical fertilizers, Venda farmers have been losing the soil, seed varieties, and clean water they nurtured for generations. Today, with increasing pressure from mining, tourism, drought, and GMO seeds – and without adequate legal protections and enforcement – the future of Mupo is more threatened than ever.

Supported by The African Biodiversity Network, Mphatheleni Makaulule founded Mupo Foundation with several connected goals in mind: to protect seed diversity and ensure food sovereignty; to restore the traditional power of Venda women; to empower youths by reconnecting them with their elders and heritage; and to protect Mupo by strengthening the Indigenous Venda knowledge system in which spirituality is rooted in ecology. As Makaulule explains, in the traditional Venda worldview, policies and punishments do not need to be enforced because the laws that protect the earth are rooted in people’s hearts. She emphasizes the importance of trying to return to this value system, even if government officials and mining interests may not move to do so any time soon.

Mupo Foundation’s partner organization, Dzomo la Mupo (Voice of Mupo) was founded with similar goals. It is led by a committee of elders, chiefs, and Makhadzis – the female leaders of Venda communities, equivalent to male chiefs. Both groups see the return to Indigenous ways as especially important for women. Throughout Africa, it is common that women select which seeds should be saved from year to year, and their power in the household has been undermined by the arrival of cash crops, which are often marketed specifically to men. Makaulule explains, “When the soil is damaged, when the forest no longer has trees to pick fruit from, it affects women first. In Africa, most women are not employed. Our income is the soil where I can grow food, the forest with trees where I can harvest wild, organic fruits, the stream and river where I can fetch clean, pure water.”

Mupo Foundation has also fought several court battles to protect sacred sites. Venda communities are concerned about the destruction of these sites and their associated ceremonies, rituals and practices, because they see it leading to community and environmental breakdown. In one case, Mupo Foundation successfully halted the construction of tourist chalets beside Phiphidi Falls, where Makhadzhis have always gone to pray for rain.

As a consequence, word of Mupo Foundation’s work has spread. Its new name, Earthlore, is intended to reflect the growing numbers of communities – in Zimbabwe and in other regions of South Africa – that collaborate with Mupo to fight the threats of coal mining, fossil fuel extraction, and deforestation. At the same time, these communities are showing their desire to reconnect to the Indigenous knowledge systems and sacred places that have kept seeds diverse, soils healthy, water clean and communities thriving for generation after generation.

To learn more, visit: http://earthlorefoundation.org. You can also visit Mphatheleni Makaulule’s personal website: http://mphatheleni.co.za. Read this article in Truthout: African Women Organize to Reclaim Agriculture Against Corporate Takeover. Or this: “The Rain Will Fall for Everybody”: Protecting Sacred Sites as Indigenous Cultures, Livelihoods, and Ecosystems.

To learn more about the African Biodiversity Network, visit: http://africanbiodiversity.org.