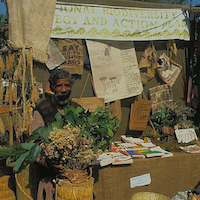 Beej Bachao Andolan (“Save the Seeds Movement”) has been working in the Indian state of Uttarakhand since the 1980s to restore traditional, agroecological farming knowledge, practices, and seed diversity – all of which have been disappearing since the start of the “Green Revolution” in the 1960s. The movement is led by activist and farmer Vijay Jardhari, who joined together with local farmers from villages across the state’s Himalayan foothills to collect and conserve some 350 varieties of rice and 220 varieties of kidney beans, as well as lesser numbers of wheat, barley, cowpea and lentil varieties. They have also documented and brought back into practice ingenious and sustainable techniques like baranaja, a system of intercropping and rotation of 12 staple crops. Find out more about the movement here and here, and watch an inspiring documentary film, Baranaja: Twelve Seeds of Sustainability, by Project Survival Media.