You are here: Home / Our Projects / Global to Local / Local Bites Podcast / Seeds of Resilience, Seeds of Sovereignty 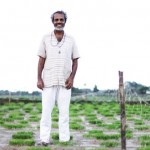 Humanity has lost nearly three-quarters of its agricultural biodiversity in the last century. Now, in the face of an increasingly volatile climate, conserving the remaining seed diversity is a matter of survival. In this episode, Local Bites interviews ecologist and renowned seed conservationist, Dr. Debal Deb on the value of traditional seeds in an unstable world. Deb argues that traditional seeds are vitally important, not just to ensure food security, but also for protecting local food sovereignty against the corporate control of food systems around the world. Deb shares insights from his work conserving and sharing over 900 indigenous seed varieties in eastern India, and he talks about why ecological farming, a communitarian ethos, and localization are all key components of his conservation efforts. Learn more about Deb’s work here, or watch these short films by Jason Taylor of The Source Project: “The Farmer, the Architect and the Scientist” (made for The Gaia Foundation), and “Food Web Theory“.