You are here: Home / Technology / The Problem with Techno-Optimism 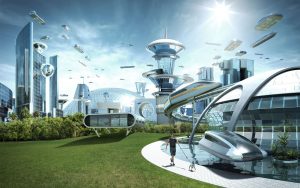 Today there are high hopes for technological progress. Techno-optimists expect massive benefits for humankind from the invention of new technologies. Peter Diamandis is the founder of the X-prize foundation, whose purpose is to arrange competitions for breakthrough inventions. His aim is “a world of nine billion people with clean water, nutritious food, affordable housing, personalized education, top-tier medical care, and nonpolluting, ubiquitous energy”. The Internet is a special focus for techno-optimists. According to Google executives Eric Schmidt and Jared Cohen,“future connectivity promises a dazzling array of ‘quality of life’ improvements: things that make you healthier, safer and more engaged”. K. Eric Drexler’s preferred instrument of universal prosperity is nanotechnology. He envisages a future in which miniature robots produce “a radical abundance beyond the dreams of any king, a post-industrial material abundance that reaches the ends of the earth and lightens its burden.”

Some of the shininess of these forecasts depends on a mistake about the well-being of people living at different times from us. When determining how happy people were in the past or will be in a technologically enhanced future, we imaginatively project ourselves into their times. We expect that we would feel miserable if sent on a one-way time travel trip back to the 13th century and therefore suppose that that misery must have been experienced by the people who lived then. We imagine that we would be ecstatic to wake up and find ourselves surrounded by the technologies depicted in Star Trek and so conclude that people fortunate enough to live with them must experience very high subjective well-being. These imaginative exercises mislead us about the effects of technological progress on well-being by ignoring a feature of human psychology I call hedonic normalization. Differences in normalization make people today very different from people of the 13th or 23rd centuries.

Humans have flexible psychologies that enable us to flourish in environments ranging from the Arctic to the Kalahari Desert. Walruses and meerkats lack this psychological flexibility. They are unlikely to work out how to survive an exchange of habitats. Hedonic normalization permits a human raised in the high Himalayas to find that environment normal. The same psychological mechanism that hedonically normalizes humans to Arctic and desert environments normalizes us to the very different technological environments of the 1st and 21st centuries. We can predict that it will normalize us to whatever the technologies of the 23rd century may be. Differences in hedonic normalization mean that ancient Romans, 21st-century New Yorkers, and 23rd-century residents of Cairo would view cars powered by internal combustion engines very differently. What for the Romans would be a quite miraculous technology is boringly familiar to the New Yorkers, and may be repellently primitive and polluting for the Cairenes.

When we overlook hedonic normalization, we tend to significantly overstate the extent to which technological progress will boost the happiness of future people. I would be very happy to abruptly find myself on board a 23rd-century starship if such things exist in the future. But this is not how people hedonically normalized to those technologies will feel. The error of ignoring hedonic normalization is especially apparent when we think about the past. Techno-optimists point to the big differences that technological change has made to our world. Mary Beard’s description of the streets of ancient Pompeii covered in animal dung, rotting vegetables, human excrement and flies makes modern city dwellers glad to be alive now. But imagining how a time traveler from the early 21st century would feel to find herself marooned in Pompeii does not tell us how people hedonically normalized to that time felt. Doubtless the Pompeians would have preferred cleaner streets. But the filthiness of their streets did not affect them in the way that it would affect someone normalized to our comparatively refuse- and excrement-free highways and byways. To see this more clearly, consider how people from the 23rd century might feel about life in our times. The conditions of our cities are clearly not perfect – but they are not nearly as bad for us as they might seem to someone normalized to cities built with 23rd-century technologies.

New technologies can significantly boost the happiness of the members of the generation that first experiences them. However, hedonic normalization tends to erode many of these benefits. There is more at stake here than some unwarranted smugness about past lives and envy of future lives. A tendency to overvalue technological progress tends to make us reckless in its pursuit. In this era of climate change and nuclear arsenals capable of destroying the world many times over, we are acutely aware of some of the perils of technological progress. When we overestimate the propensity of progress to boost well-being, we are more likely to judge the risks of progress to be worth taking.

Our rush toward a technologically enhanced future is likely to expose us to many threats of extinction of similar or greater magnitude to those imposed by climate change or nuclear weapons.

This post originally appeared in OUPblog, the blog of Oxford University Press.

Book Review: From Global to Local – the Making of Things and the End of Globalization

Nicholas Agar is Reader in Philosophy at Victoria University in New Zealand, and the author of The Sceptical Optimist: Why Technology Isn't the Answer to Everything. He has spent much of his academic career writing about ethical and philosophical issues that arise in connection with new technologies.