You are here: Home / Development / Post-pandemic development: a Ladakhi perspective 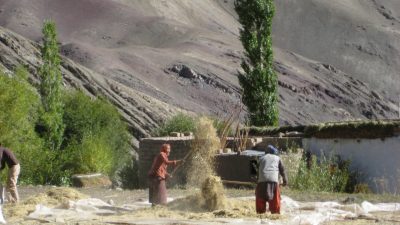 A week before the announcement of the Janata [public] Curfew slated for March 22, 2020, I spoke with a 43-year-old close relative in her village in Leh, Ladakh, by phone from Delhi. Around that time, the news of rising infections from the novel coronavirus coming in from China, Italy and Iran were ominous. Ladakh had been reporting positive cases since March 6.

Speaking authoritatively, a malaise that educated people tend to suffer from when speaking to “uneducated” people, I advised her to stock up on rations. While dispensing this advice, I forgot that I was talking to a member of a traditional Ladakhi household. My relative lives in her husband’s ancestral house, inherited by him according to Ladakhi customary norms. In Ladakh’s villages, the location of traditional dwellings is carefully considered because cultivable land is very scarce. Of the 45,100 square km area of Leh district, only 103.19 sq km – or just 0.22% – is cultivable. Dwellings are thus situated huddled together like penguins on slopes rising up from agricultural land below.

Further, during Ladakh’s extended winter, temperatures can drop to a merciless -20 degrees Celsius. That limits the agricultural season to the five summer months. Against such odds, Ladakhis not only survived, but prospered. Wheat, barley, local pea, mustard and karze (a lentil) were grown on the scarce land. These were supplemented by apricots, walnut, wild vegetables and fruit like lachu. For clothing, Ladakhis used livestock to produce wool.

Hence, Ladakhi villages until recently were shining examples of Gandhian self-sufficient communities, as the “real things”, like food and clothes that Mahatma Gandhi referred to, were produced at the village level. Ladakh, however, was not an isolated Shangri-la. People’s needs were supplemented by a thriving trading culture, as Ladakh was the knot that connected Tibet, Central Asia, Himachal Pradesh and Kashmir. Yet trade existed to fulfill the needs of the Ladakhis, not the other way round.

Thus, when I told my relative she should stock up, she nonchalantly said that they had three months’ stock of barley and wheat flour. Besides, she added, she had access to public distribution system (PDS) rations. Moreover, I knew that she still rears cattle for milk. Her words were a grim reminder of how dependent Ladakhis of my generation have become on long-distance trade for our basic needs.

It reminded me of how young Ladakhis were educated and then moved away from our villages, our culture and agriculture. While our elders were tending to the barley maturing in the fields, we were mugging up facts about photosynthesis in classrooms. When the roasted mix of barley and peas was being taken to the water mills to make flour, we, in our clean Western-style school uniforms, were probably learning that the capital of Australia is Canberra, not Sydney.

And yes, learning about Canberra did help us go places. Today, Ladakhis are working in Saudi Arabia, Japan, the United States and different parts of India. Outward migration of Ladakhis is a serious issue that needs more research. But more importantly, education and development – de-contextualised from our Ladakhi roots – pulled and pushed us into the modern economy, which came with the promise of greater levels of well-being. However, the integration into the modern economy de-skilled and de-cultured us, turning us into invisible cogs in the wheels of the economy – as education migrants, labourers, tourist guides, trekkers’ helpers, taxi drivers, fuel pump attendants, clerks, security guards, etc.

Now, Ladakhis exist for the economy, not the other way round. In the process, a way of life attuned to human and ecological well-being has been eroded. That is why, now, Ladakhis are using precious agricultural land to build hotels, guest houses and modern houses. This has made us massively dependent on the global economy to fulfill our basic needs. Today, the coronavirus has exposed us to the vulnerabilities of globalisation. Ladakhis dependent on tourism are staring at the prospect of meagre earnings for years to come. Those who have taken loans to buy a taxi, to build a guest house, to start a café, etc, will be under even greater duress.

Rayagada, 2,700 km away from Ladakh in southern Odisha, is another tribal-dominated area I know intimately because of my research work there. I lived for a year in Damini, a Kondha Adivasi village. Rayagada comes under the fifth schedule of the constitution, which provides for the protection of tribal land. Yet more than half of Damini’s land is owned by Telugu-speaking traders from nearby towns.

The Kondhas of Damini grow their own food, such as mandiya (finger millet), paddy and kanga (pigeon pea). Cotton cultivation, introduced a decade ago by Telugu-speaking money lenders, and a eucalyptus plantation promoted by JK Paper Mill in Rayagada, encouraged tribal people to grow these crops instead, and their increased cultivation are slowly eating away the share of land under traditional food crops. Yet, despite the alienation of much of their land, not a single person in Damini is sleeping on an empty stomach during the nationwide lockdown that ensued after the Janata Curfew. Like my relatives in Ladakh, they too have stocks of their food crops to last them till July.  Moreover, the Kondha’s food security is further ensured by the forest fruit and wild vegetables they harvest.

However, not all of their fellow Kondhas are so lucky. Many are stuck in major cities due to the lockdown. I spoke to Pomila from the Lachika clan of neighbouring Gurotli village. A migrant construction labourer, she is stuck in Hyderabad with eleven other Kondhas from Rayagada. I am sure many such migrant tribal labourers stood to wait for buses and trains at Delhi’s Anand Vihar bus terminal and Mumbai’s Bandra station.

Ladakh’s administration has done a good job in containing the spread of the virus. At the time of writing, there are only four active cases in the union territory, while no positive case has been reported from the tribal belt of Odisha. We should be cheerful about this achievement.

But the current unprecedented crisis must prod us to reassess post-pandemic tribal development policies. Should these be only about conventional development, which is making Adivasis dependent on non-local factors, and hence less autonomous? Or should policies that facilitate Adivasis to “develop along the lines of their own genius”, as Jawaharlal Nehru wrote, take centre stage? The latter policies lead to local production of the majority of the needs of local residents.

A degrowth perspective on the coronavirus crisis
Locking Down Leviathan

Padma Rigzin was born and raised in Ladakh. He is currently a PhD scholar in the Department of Humanities and Social Sciences, Indian Institute of Technology Delhi.