The arrests at the end of Flood Wall Street may have been the only reason the mainstream media paid attention to the several thousand people who parked themselves next to the Charging Bull for the better part of eight hours. But, although no station covered it, what happened before then was much more important to solving the climate crisis. There were few tweetable sound bites, but the world would do well to pay attention because it signaled the next big movement on the horizon.

When the initial surge settled down and we realized the police weren’t going to immediately clear us out, people got comfortable. Someone suggested gathering into small groups. I joined a circle with six other people I didn’t know and am unlikely to ever meet again. Aged from early 20s to late 60s, none of us were local and all of us were white, acutely aware of the privilege that allowed us to spend a normal workday sitting on the street, enjoying a convivial sunny afternoon in the financial capital of the world. Conversation meandered until one young activist, suitably incognito in dark shades and brimmed hat, suggested we each share an example of an initiative we found inspiring.

He told a story about a neighborhood in his native Detroit, where 1,300 street lights were removed in 2011 because the local government was $4 million in debt to DTE, the regional utility corporation. Incidentally, DTE, which generates most of its power from coal, posted a profit of $711 million that year. Since then, the residents have banded together to crowdfund their own solar-powered street lights. A middle-aged father from Chicago told of the food cooperative he was setting up with other community members—only the second such coop in the whole of Chicago. I jumped in with the example of my high school—an alternative public school in upstate New York, known for student-centered learning and more than just a of dash of eccentricity. In an increasingly privatized and corporatized school system it is small spark of genuine innovation, equally accessible to students of any socioeconomic background.

The day after Flood Wall Street, the internet was abuzz with tales of scuffles with the police, an eerily poignant shot of a polar bear in handcuffs, and a debate between journalist Chris Hedges and a conservative reporter about capitalism that had erupted at the edge of the crowd. Watching the debate footage, I was struck by the fact that the two weren’t really on opposite sides. Both were clearly in favor of the quintessential American Dream: life, liberty and the pursuit of happiness. The difference was in how they believed we could get there. Repeating the far right’s favorite mantra, the reporter blamed the government for stealing from the hard-working American and giving to the idle poor, and lauded capitalism as the only solution. Hedges, by contrast, blamed a corporate coup d’etat for the plight of the poor and the disappearing middle class.

If it wasn’t obvious before, it is now: capitalism has become the most divisive issue of our time. But it’s an oversimplified version. The problem is actually more intricate than straightforward capitalism, and the solutions potentially more unifying. What Flood Wall Street is trying to do, along with so many other people’s movements, is to transform one of the most un-free markets that ever existed: a corporate state in which the role of government is to ensure that the so-called “invisible hand” favors only the wealthy few and the biggest corporations. The capitalism celebrated by many ordinary Americans, including the reporter, simply doesn’t exist.

Whatever you want to call it—capitalism, the growth economy, globalization, the corporate state—our current economic system has aimed to make the world “flat”, paving the way for big business with a thick coating of fossil fuels. Reclaiming and restoring all the rumples and folds will require engaging in a myriad of place-based economic activities, like those mentioned in the Flood Wall Street group. It may be more time-consuming, requiring more tolerance, attention and face-to-face conversation, but if we want to create an economy that works for people and the planet we’ll have to start dealing in details. They may be devilish to explain, but that’s also where the true solutions are—ones that are adapted to local cultures and ecosystems. 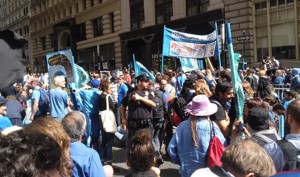 There are countless numbers of these already—those described at Flood Wall Street, in the Planet Local series, on Naomi Klein’s new Beautiful Solutions website and many others. A number of these localized economic solutions have a distinctly free-market look to them. They may also appear socialist or, heavens, communist, depending on your political bent. The point is that they are about putting people first, profits a distant second, and mega-multinational corporations nowhere in the picture. But whatever the feel-good effect, it’s not going to be enough just to list them. As Klein writes in her new bestseller, This Changes Everything: Capitalism vs. The Climate, “If the opposition movements are to do more than burn bright and burn out, they will need a comprehensive vision for what should emerge in the place of our failing system, as well as serious political strategies for how to achieve these goals.”

We are just now starting to come together around that comprehensive vision, with initiatives like the New Economy Coalition blazing a trail in North America, but the movement needs to go bigger and broader. It’s easy to forget that outside the industrialized Western world, the corporate consumer lifestyle still looks like a purely beautiful dream. Deadly siren song it may be, but who isn’t tempted by images of riches and glamour? Bridges need to be built between cultures and countries, as well as issues and actions. This is the aim of an emerging global network – the International Alliance for Localization.

From these connections will come those all-important political strategies. Formulating them will take collaboration on a grand scale—linking up all the small initiatives into a dense international network with serious clout. And at least enough voice to drown out the corporate interests that now dominate every national and international meeting on economic policy.

It is two weeks after Flood Wall Street and the potential of it still fills me with hope. If nothing else, it made one thing very clear: the fight to solve climate change is the fight for equality, for financial security, healthy food, real education and a world with less conflict. Whatever your particular passion—be it the environment, food, education, labor rights, or simply wanting to leave the world a better place—we are in this together. It’s time to link up.

Kristen Steele is Associate Programs Director of Local Futures, which is launching the International Alliance for Localization (IAL) on November 8th in New York City. The IAL aims to be a new forum for global collaboration to support place-based solutions worldwide.