You are here: Home / Food and Farming / Permaculture and the Myth of Scarcity

This is the second article in our series by the speakers of Voices of Hope in a Time of Crises, a one-day event, which will explore localized solutions to our global problems and launch the International Alliance for Localization. Join the discussion on November 8th at The Cooper Union in New York City. 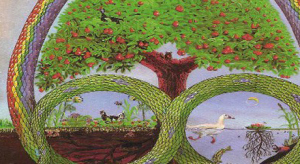 At a conference a couple weeks ago, an activist who does work in Africa recounted an encounter she had with the minister of agriculture of a certain African country. The minister spoke with excitement about the high-tech agricultural technologies he was bringing into the country in partnership with large agribusiness companies, so the activist brought up the topic of organic agriculture. The minister said, “Stop. You don’t understand. We cannot afford such luxuries here. In my country, people are starving.”

This reflects a common conception about organic agriculture – that it sacrifices productivity in the interests of the environment and health. It stands to reason that if you forgo pesticides and chemical fertilizer, yields are going to suffer.

This, in fact, is a myth. In Sacred Economics I cite research showing that when it is done properly, organic growing methods can deliver two to three times the yield of conventional methods. (Studies showing the opposite are poorly constructed. Of course if you take two fields and plant each with a monocrop, then the one without pesticides will do worse than the one with, but that isn’t really what organic farming is.) Conventional agriculture doesn’t seek to maximize yield per acre; it seeks to maximize yield per unit of labor. If we had 10% of the population engaged in agriculture rather than the current 1%, we could easily feed the country without petrochemicals or pesticides.

It turns out, though, that my statistics are way too conservative. The latest permaculture methods can deliver much more than just double or triple the yield of conventional farming. I recently came across this article by David Blume chronicling his nine-year permaculture enterprise in California. Running a CSA for 300-450 people on two acres of land, he achieved yields eight times what the Department of Agriculture says is possible per square foot. He didn’t do it by “mining the soil” either – soil fertility increased dramatically over his time there.

When people project an imminent food crisis based on population growth or Peak Oil, they take for granted the agricultural methods we practice today. Thus, while the transitional period may involve temporary food shortages and real hardship, permaculture methods can easily feed the peak world population of perhaps 10 or 11 billion we’ll see by mid-century.

It is true that the old, control-based methods of agriculture are nearing the peak of their productive potential. Further investments in this kind of technology are bringing diminishing marginal returns – witness the proliferation of Roundup-resistant weeds and the “necessity” of new kinds of herbicides to deal with them. This parallels the situation with so many other kinds of control-based technology, whether in medicine, in education, politics…. we are indeed nearing the end of an era.

One sign that this is so is that the old models are not working financially anymore either. Once upon a time, monocropping may have been the most economically efficient way to farm, but today even farmers who play by the conventional rules can barely stay in business. Blume outperforms them not only ecologically and yield-wise, but also financially. Making the transition to permaculture is therefore a transition in our thinking, our habits, and our forms of economic organization. It springs naturally from ecological thinking, it embodies that habit of service to others, and it concords with the economic form of small, independent or cooperative producers. For this reason, it does not easily fit into the operations of large agribusiness corporations. (Let us note, though, that they too are becoming obsolete in their current hierarchical, centralized form.)

(1) High-intensity permaculture around major population centers that meet 80/% of their food needs. Blume points out that even without modern permaculture techniques, the city of New York, with over one million people, met all its food needs from within seven miles prior to 1850.

(2) Widespread gardens replacing a significant portion of America’s current number one crop: lawn grass. Many suburbs could be nearly self-sufficient in food.

(3) A healing of the damaged lands of the farm belt and a restoration of the original forests and prairies of many of those areas. With high-intensity local production, many of the acres planted with corn, wheat, and soybeans in the Midwest will be unnecessary for food production. This is not to say that commodity crops for export to other regions will disappear, just that they will have a much diminished role.

(4) Increased biofuels production on decreased acreage. While most biofuel in the U.S. Is made from corn, Blume points out that other crops can deliver as much as ten times the fuel per acre – and that’s not even counting cellulose conversion technologies.

(5) As presaged by the resurgence of interest in farming among young people, a far greater proportion of the population will be engaged in agriculture, and gardening will be nearly universal. Depopulated rural areas will be repopulated and small town economies will flourish based on local production and consumption.

In America, the transition to this vision will involve a severe disruption of our present way of life. In other countries where people still practice small-scale farming akin to modern permaculture, the transition might be much smoother. They can leapfrog the 20th century directly into the 21st, without repeating our ecologically and socially devastating mistakes. People in other lands can adapt the principles of permaculture to their own specific environmental and social circumstances. This is not about clever white people inventing a new model and imposing it on someone else. (Indeed, many permaculture techniques have been adopted from indigenous farmers around the world.) It is about everyone learning from everyone else, all guided by the ideal of wedding agronomy to ecology and fostering bioregional food self-sufficiency.

This article was originally published on charleseisenstein.net

Charles Eisenstein will be speaking at Voices of Hope in a Time of Crisis on November 8th in New York City. In his work, Charles focuses on themes of human culture and identity. He is the author of several books, most recently Sacred Economics and The More Beautiful World our Hearts Know is Possible. His background includes a degree in mathematics and philosophy from Yale, a decade in Taiwan as a translator, and stints as a college instructor, a yoga teacher, and a construction worker. He currently writes and speaks full-time. He lives in Pennsylvania with his wife and children. http://charleseisenstein.net

Charles Eisenstein is a speaker and writer focusing on themes of human culture and identity. He is the author of several books, including Sacred Economics and The More Beautiful World our Hearts Know is Possible.