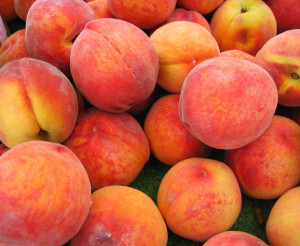 An amazing initiative happened in Slovenia this summer. It started with a man who decided to buy a box of peaches from a local farmer while on a business trip to Vipava – a fruit-growing region.  He was very pleased about the price – 1 euro per kg – which is roughly half the price in the shops.  The farmer was even happier about the price, because this was almost 6 times the ‘global market price’ he was getting from Fructal, the fruit juice factory in the region!

Because there was plenty of room in his van, the businessman offered to bring back boxes of peaches to others who might be interested.  He posted his offer on Slovenia’s ‘good deeds’ portal (www.dobradela.si), and the offer spread quickly through email and Facebook. In the end he received several hundred requests for peaches – too many for him to handle. So he asked people for organizational help: receiving and sorting requests, picking up boxes from a central location in Ljubljana, and delivering them locally. An online sign-up system was set up virtually overnight, and dozens of people volunteered to help. Suddenly, a one-time offer became a nation-wide project!

As one might expect, he bumped into administrative barriers: he was told that ‘good deeds’ are not recognized by law, and that he would have to pay tax on the money he collected from people – even though he would be receiving only what he paid for the peaches, without any profit. These barriers didn’t stop him. Instead he distributed the peaches for free! People were told that in exchange they could do something good for someone else …

More than five thousand people participated in the initiative, distributing over 10 tons of peaches throughout Slovenia. It was one of the biggest self-organized projects in the country, second only to the ‘Let’s Clean Slovenia in One day’ campaign in 2010.  And these peaches actually had taste: unlike those at supermarkets, they ripened on trees and were delivered to people virtually overnight.

The peach season is over, but the initiative continues: the core group is setting up a system that will be viable financially. Growers are already contacting them with offers for autumn fruits like grapes and apples, and people are using the system to distribute things for those in need, from toys and bicycles to clothes, computers, phones, and more.

This shows that localisation is not just about village economies, but it’s about forging more direct, more human-scale relationships and circumventing the global juggernaut. Most important, this spontaneous, self-organizing initiative is proof that people are motivated by far more than self-interest and profit.

Globalisation versus Community
Building a Village: Lessons in Urban Living from South Korea

Marjana Kos began working for Local Futures in 2006. She holds an Master's degree in Holistic Science from Schumacher College and focused her studies on the topic of money. She lives in Slovenia and spends her free time revitalizing a derelict hectare of land with her partner and young son, creating a forest garden and building a low-impact, natural home made of local materials. She is also active in raising awareness about issues of globalisation, new economics, the money system and complementary currencies. She writes articles, keeps a blog and gives talks and workshops on these topics.