You are here: Home / Past Conferences / South Royalton, Vermont, USA 2017

This two-day conference was held on October 21st and 22nd, 2017 at the Chase Community Center of the Vermont Law School in South Royalton and was co-organized by Local Futures, BALE (Building A Local Economy), Vermonters for a New Economy, Sustainable Future Fund of the Vermont Community Foundation, New England Resilience and Transition Network, and the New Economy Law Center.

The conference included both plenary talks and breakout sessions on important aspects of the shift to a new economy: food and farming, energy, education, finance and banking, local business, equity and justice, democracy, media, and more. In addition, there was a focus on adaptations to this region’s climate and resources by both its indigenous cultures and the farmers and artisans of more recent immigrant cultures. 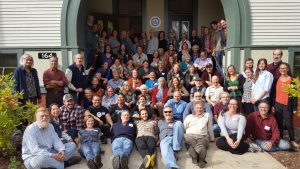 Systems View Panel with
Frances Moore Lappé and Susan Clark
“Is This What Democracy Looks Like?”

Systems View Panel with
Gus Speth, Helena Norberg- Hodge, and Jim Tull
“Building the Localization Movement:
Where Do We Go from Here?”

Author of Power from the People

Author of Positive Thinking in a Dark Age