You are here: Home / Coronavirus / Origin of Covid-19: industrial livestock? 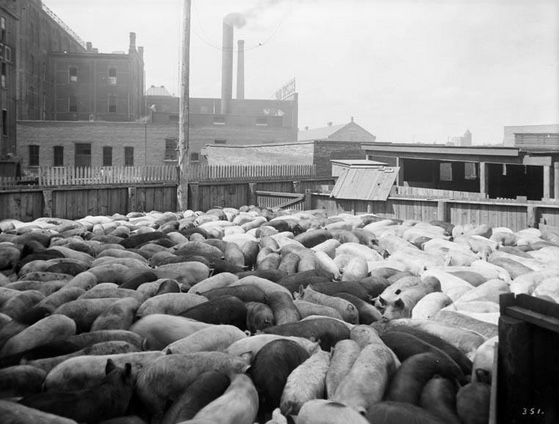 Let’s be clear: there is no solid evidence that the origin of the SARS-CoV-2 virus, which is the cause of the current Covid-19 disease pandemic, is an open seafood market in Wuhan that also trades in domestic and wild animals. All that we know is that several early cases of people diagnosed with Covid-19 either worked at this market or shopped there in the days preceding their diagnosis. Many media outlets and pundits have seized on this information to claim that Chinese wet markets and the live trade in domestic and wild animals are to blame for the emergence of the disease.[1] And some are even calling for a ban on wet markets— which are vital to the livelihoods and food security of millions of small farmers, traders and consumers.[2]

There is a growing body of evidence that points to a different origin story for Covid-19. We now know that none of the animals tested at the Wuhan seafood market tested positive and about a third of the initial set of reported cases in people in Wuhan from early December 2019 had no connection to the seafood market, including the first reported case .[3] [4] And we also now know, thanks to the leak of an official Chinese report to the South China Morning Post that the actual first known case of Covid-19 in Hubei was detected in mid-November, weeks before the cluster of cases connected to the Wuhan seafood market were reported.[5]

Last week, scientists at the Scripps Research Institute published a genomic sequencing analysis of the SARS-CoV-2 virus in the journal Nature that raises more doubts about the possibility of SARS-CoV-2 having originated at the Wuhan seafood market.[6]

The scientists conclude that SARS-CoV-2 evolved from natural selection and not genetic engineering in a lab, and they say that this natural selection occurred through two possible scenarios. One is that it evolved into its highly pathogenic form within humans. In this case, a less pathogenic form of the virus would have jumped from an animal to a human host and then would have evolved into its current form through an “extended period” of “undetected human-to-human transmission”. Under this scenario, there is no reason to believe that the Wuhan seafood market had anything to do with the evolution of the disease, even if it is quite possible that an infected person at the market could have transmitted it to others.

The second scenario fits with previous coronavirus outbreaks, in which humans contracted deadly coronaviruses after direct exposure to civets, in the case of SARS, and to camels, in the case of MERS. In this scenario, SARS-CoV-2 would have evolved to its present form in an animal host before transfer to humans. Like many other scientists, the Scripps researchers think that it is most likely that the initial transmission would have occurred from bats to an intermediate animal host, where the virus then evolved to its current form.

The Scripps researchers go on to say that the particular genetics of SARS-CoV-2 indicate that “an animal host would probably have to have a high population density (to allow natural selection to proceed efficiently) and an ACE2-encoding gene that is similar to the human ortholog,” which is what the SARS-CoV-2 virus binds to in humans.[7]

So which animals fit this criteria?

Another recently published study identifies the most likely intermediate animal hosts for SARS-CoV-2, based on their presence in Wuhan and their having a human-like ACE2 that enables the binding of SARS-CoV-2. These are the animals the study identified: civets, pigs, pangolins, cats, cows, buffalos, goats, sheep and pigeons.[8]

Many of the animals on this list are industrially farmed in China, even wild animals like civets and pangolins are intensively farmed for their use in Chinese medicines. Suspicions that wild animal farms may have been behind the Covid-19 outbreak have already led the Chinese government to shut down 20,000 wild animal farms across the country.[9]

But hardly any attention has been given to some other animals on this list, which more clearly meet the “high population density” criteria. Pigs would be one obvious candidate from this list, for several reasons.

For one, pigs and humans have very similar immune systems, making it easy for viruses to cross between the two species, as happened with the Nipah virus outbreak in Malaysia in 1998.[10] Indeed, just three years before the Covid-19 outbreak began, tens of thousands of pigs in four factory farms in Qingyuan county in Guangdong, less than 100 km from the site where the SARS outbreak originated in 2003, died from an outbreak of a new, lethal coronavirus strain (SADS) that turned out to be 98 percent identical to a coronavirus found in horseshoe bats in a nearby cave.[11] Luckily transmission to humans did not occur, but subsequent laboratory tests demonstrated that such transmission could have been possible.[12]

Hubei Province, where Wuhan is located, is one of the top five largest producers of pigs in China. Over the past decade, small pig farms in the province have been replaced by large factory farms and medium-sized contract operations, where hundreds or thousands of genetically-uniform pigs are confined in high density barns. These industrial farms are the ideal breeding grounds for the evolution of new pathogens.[13]

Hubei’s factory pig farms are still reeling from a massive outbreak of African swine fever that struck the province and other parts of China just over a year ago, wiping out up to half of the national herd.[14] In these conditions, it is entirely possible that an outbreak of a new coronavirus among pigs in the province could go unnoticed.

GRAIN and other organisations and scientists have been raising the alarm for over a decade now about how the industrialisation and corporate consolidation of meat production has generated increased risks for the emergence of global pandemics such as Covid-19.[15] But this reality has been completely ignored by governments and the big meat companies they are beholden to. As noted by evolutionary biologist Rob Wallace, “Anyone who aims to understand why viruses are becoming more dangerous must investigate the industrial model of agriculture and, more specifically, livestock production. At present, few governments, and few scientists, are prepared to do so.”[16] With the growing carnage from Covid-19, a radical change in direction is more urgent than ever.

[3] Carolyn Kormann, “From Bats to Human Lungs, the Evolution of a Coronavirus”, The New Yorker, 27 March : https://www.newyorker.com/science/elements/from-bats-to-human-lungs-the-evolution-of-a-coronavirus

[13] “Building a factory farmed future, one pandemic at a time”, GRAIN, 3 March : https://www.grain.org/en/article/6418-building-a-factory-farmed-future-one-pandemic-at-a-time

Coronavirus and the death of ‘connectivity’
We will survive the Coronavirus. Will we survive ourselves?