You are here: Home / Happiness / Not Giving up on Happiness: Care of the Self and Well-Being in a Plague Year 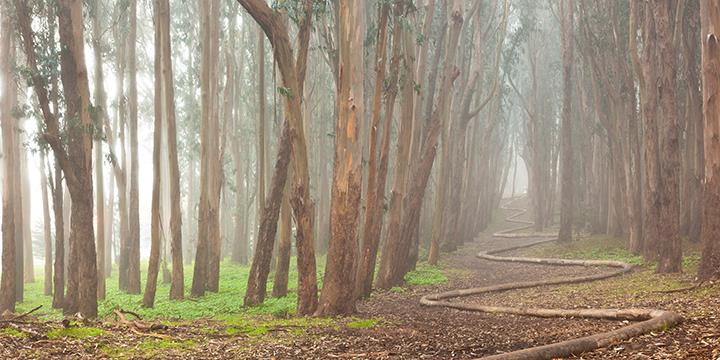 The specter of plague haunts our world, and it brings with it not only the ghouls of disease and death but vast economic and social uncertainty of a sort only the most elderly among us remembers (the Great Depression and World War II). My father is 90 and when I called him a child of the depression once, he pointed out to me that as someone born in 1929, he really didn’t come to political consciousness until the Depression had ended. He was too young to fight in the war, though he joined the army three years after it ended. So you’d really have to be 95 or older to have fully experienced those world-shaking events.

As I write, the United States is (somewhat belatedly) trying out social distancing as a way of attempting to forestall the worst consequences of the novel coronavirus, attempting to avoid the catastrophe that has befallen Italy, e.g. Friends of mine have spoken of anxiety attacks, general unease, fear of the unknown. And with good reason, since Italy is sending us scenes like this: 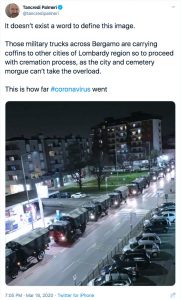 It is not going to be easy to get through the coming year (or God forbid, year and a half). We will do it. In this essay, I won’t address the governmental and social steps that will be necessary, nor will I consider how to speak about it. I’m instead going to talk about care of the self and how to maintain well-being during this calamity. For the past few years I’ve been devouring the literature on Positive Psychology, and it led me to teach a course this semester on the History of Happiness and the care of the self. In that course, we look at the Greeks, modern Buddhism, and Sufism, as well as Positive Psychology itself. This movement was founded by Professor Martin Seligman at the University of Pennsylvania. There are now several peer-reviewed journals devoted to this research, and to my mind, researchers have discovered unexpected contributors to subjective well-being which, however, would mostly have come as no surprise to the wisdom traditions such as Buddhism and Sufism.

So here is what I have learned about well-being or happiness (Seligman prefers the term “well-being” but the publishers rather like books on happiness, so they’ve titled his that way).

Being grateful and expressing gratitude has been found to be highly correlated with feelings of well-being and happiness, and practices of gratitude can increase those feelings significantly. Say someone did something nice for you, and you thanked the person perfunctorily. If you now go back and sit the person down and explain what an important impact on your life their thoughtfulness had, it increases your feelings of well-being and those of the person thanked. Remembering something for which you are grateful increases happiness and reduces stress and depression. Some people keep a regular gratitude journal, which may increase feelings of well-being. Kiralee Schache et al. argued in a 2018 article in The British Journal of Health Psychology that there are actually physical benefits of gratitude. We need all the positive health effects we can get.

So for those who are social distancing and feeling a little lonely and a lot anxious, one action this literature suggests we might take is to call up people who’ve done nice things for us and just tell them how grateful we are and what it meant to us. All of us have reasons to be grateful even in the midst of our current predicament. We after all have been given a lot of positive things even if we now face a dire challenge. It is important not to lose sight of everything we have to be grateful for even as some things are taken from us.

Hope researcher Charles Snyder wrote, “A rainbow is a prism that sends shards of multicolored light in various directions. It lifts our spirits and makes us think of what is possible. Hope is the same – a personal rainbow of the mind.”

Being hopeful or optimistic sometimes gets a bad rap as not sufficiently hard-nosed. As Alan Carr notes, Voltaire famously made fun of Leibniz’s assertion that we live in the best of all possible worlds (arguably, science and cosmology suggest that Leibniz was right– even slight changes in the history of the earth, or in the paramaters of the laws governing the universe, would have made human life impossible). Voltaire invented in his Candide the buffoonish character of Professor Pangloss, who tried to be optimistic about the 1755 Lisbon earthquake. But psychologists are finding that pessimism is bad for you in all sorts of ways.

Optimists are more likely to solve problems because they believe that if they just keep slugging away, they can solve the problem. Pessimists give up. Optimists tend to have a positive self-image and to think well of others, which helps them make friends. Hope is not unrealistic, it is a recognition that what obstacles exist can be overcome. Elaine Houston notes that Hope is positively correlated with feelings of well-being, with success in athletics and academics, Certainly as a society, and for most individuals, this challenge is one we have every hope of successfully defeating. Carr explains that we can train ourselves to be more optimistic through the three D’s. We can distract ourselves from being overly preoccupied with the negative by focusing on something positive. We can create some distance from pessimistic thoughts by reminding ourselves that they are only part of the picture, and there are hopeful signs as well. And we can dispute with our most pessimistic thoughts, pointing to the positive.

Hope fends off chronic anxiety of the sort many of us are starting to feel now. Chronic anxiety and constant triggering of fight or flight responses produce the hormone glucocorticoid, which over time depletes norepinephrine, one of three neurotransmitters associated with feelings of happiness and well-being (along with serotonin and dopamine). In other words, being depressed and hopeless produces hormones that create a downward spiral– after a while we simply cannot have that feeling of alertness and freshness that norepinephrine should give us, because anxiety hormones have depleted it. (See Rick Hanson, et al., The Buddha’s Brain.)

“A recent study in the Journal of Positive Psychology (Tamlin, Conner, DeYoung & Paul, 2016) indicates that engaging in a creative activity just once a day can lead to a more positive state of mind. Researchers at the University of Otago constructed a study to understand if creativity impacts one’s emotional well-being, based on the growing belief that there is a connection between creativity and emotional functioning. To test this hypothesis, they evaluated the responses of 658 young adults; each day the participants documented how much time they spent on creative endeavors as well as the positive and negative emotional changes they perceived.

“After 13 days, the researchers reviewed the participants’ responses and discovered an ‘upward spiral for well-being and creativity’ in those individuals who engaged in daily creative pastimes.”

Some people in the current crisis will be working overtime, and God bless the health care providers and food producers and others on the front lines. Others may have less to do than normal and find themselves at loose ends. Along with gratitude and hope, the literature strongly recommends creative endeavors.

Watching television has been shown to make you depressed. Drinking alcohol is also a downer. Listening to music, on the other hand, lifts mood and affect. My guess is that it is because when we listen to music we become its co-creators, whereas television-watching is passive (and a lot of television connives at producing fight or flight and anxiety responses).

But best of all is to make something of your own. Everyone has favorite creative hobbies, whether knitting or writing poetry or cooking or carpentry and home improvement or painting. Now is the time to get back out that canvass or to go back to work on that short story.

I have made some suggestions for how to write short quatrains after the Persian form here. In fact, I have a translation of the Rubaiyat of Omar Khayyam coming out on April 29.

Keep well, everyone. Gratitude, hope and creativity are some of the ways we can get through this. God bless.

5 Ways coronavirus could help humanity survive the ecological crisis
We will survive the Coronavirus. Will we survive ourselves?

Juan Cole is the founder and chief editor of Informed Comment. He is Richard P. Mitchell Professor of History at the University of Michigan and an adjunct professor, Gulf Studies Center, Qatar University. His books include, Muhammad: Prophet of Peace amid the Clash of Empires.