You are here: Home / Food and Farming / Mending a History of Discrimination through “Person-to-Person Reparations” 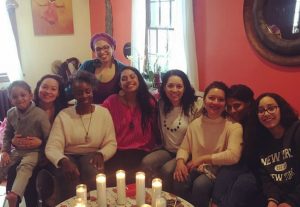 Although systemic economic forces make it difficult for anyone to survive as a farmer — and even harder to acquire enough land to start a farm — institutional racism and other forms of discrimination have made it all but impossible for people of color. That’s why Soul Fire Farm, a people of color led community farm near Albany, New York , has launched a project meant to deal with the lasting effects of discrimination in a way that both empowers POC farmers to grow the food their communities need, and empowers white farmers of means — and others who may be inclined to help — to actively heal the wounds inflicted by their ancestors.

The tool Soul Fire has created to achieve this is the Reparations Map for Black and Indigenous Farmers. The seed of the idea came from Viviana Moreno, a farmer from Chicago, who knew of two examples of farms given by white farmers to farmers of color, and who wanted to make a space that could facilitate similar person-to-person gifts of land and resources. The aim of the map is to catalyze these voluntary transfers to indigenous people and people of color who are eager to build a life in agriculture, but are stymied by systemic injustices. It works simply: POC and indigenous farmers can submit their projects and needs for inclusion in the map, and anyone with resources to fulfill those needs can use the map to get in touch with the farmers directly to share what they have.

Built into the map’s design — as an open forum that facilitates direct contact between farmers of different racial backgrounds — is the idea that, rather than being something punitive, reparations can be a tool for connecting people and allowing them to act towards each other in the spirit of generosity, accountability, and collective healing. The map takes this conception of reparations and applies it broadly, not just with reference to the US’s history of slavery, but also to the similar histories of discrimination that have affected the ability of immigrant, Asian, Indigenous, and LGBTQ farmers to make a living.

Due to the United States’ legacy of discrimination, non-white farmers are routinely paralyzed by a lack of financial means and institutional support. 95 percent of farms are operated by white farmers, despite non-white farmworkers being responsible for growing most of the food the country consumes. The US Department of Agriculture (USDA) has a history of discriminating against farmers of color through forced displacement, denial of loans, and a lack of desire to attend to civil rights complaints. One central aim of the map is to use the conversation around reparations as a jumping-off point not just for building connections among farmers, but for starting a bigger conversation about these historical and structural inequities that are built into the food system.

Despite only existing for a few months, the map lists over 40 inspiring initiatives, and has already led to some funding success stories. Dallas Robinson, a beginning farmer who plans to start the Harriet Tubman Freedom Farm near her home in Rocky Mount, North Carolina, was the first farmer whose project was fully funded through the reparations map, back in January 2018. The most recent project to be funded is Stinging Nettle Brujxs Healing Collective, a Boston-based organization whose vision is to make healing in communities of color visible and accessible. They received funds for tents, herbs, seeds, translators, and event space in May 2018.

A standout initiative on the map is Maskoke-Indigenous Ecovillage, also known as Ekvn-Yefolecv. Based in rural Alabama, this project is an indigenous-run collective which, in January 2018, acquired 577 acres of woodland which its members are using to reestablish traditional village lifeways, engage in agroecological farming, host women’s medicinal practices, re-introduce native plants and animals — including American bison — and revitalize indigenous languages. They are currently trying to raise funds to build the ecovillage’s infrastructure.

Another project of note is Wildseed Community Farm and Healing Village, a haven in upstate New York for “People Of Color, Queer and trans folks, those impacted by the criminal (in)justice system, and other communities on the frontlines of ecological disruption.” On their 181 acres, they steward vast wetlands, an apple orchard, a barn, and even a sauna, all in service of establishing a “permanent healing sanctuary” to support historically disenfranchised people in the nearby area. They’re looking for, among other things, a greenhouse, a yurt, a rainwater catchment system, a tiny house, and administrative help.

We are descendants of legacies of deep division and trauma, and devote ourselves to cultivating collaborative, reciprocal relationships with each other and this magnificent land as a mechanism of resilience, agency, and intergenerational accountability.“ – Wildseed Community Farm and Healing Village

A glance at the map reveals a whole host of other projects, each one as beautiful as the last. There’s Catatumbo Cooperative Farm, a collective of immigrant womxn and gender non-conforming people establishing a worker-owned farm in rural Illinois — they are looking for money, feedback on their business plan, advice on equipment purchasing, legal assistance, seed donations, or even “a call, text, mail, from time to time reminding us that we can do this”. There’s Arian Rivera, whose family works as shepherds near the New York/New Jersey border and who is aiming to purchase the land he is currently farming (see this short video for more on Arian’s story; his project is listed on the reparations map as Black Sheep Rock/Where the Wild Things Are). There’s the Akwesasne Freedom School (listed on the map as Indigenous Food Revival), a Kanien’keha (Mohawk) language immersion school seeking funding for a traditional seed bank and educational hands-on activities “in the garden and kitchen”.

And there are many, many more. Each initiative has its own story, yet all partake of a common heritage of solidarity in the face of theft, racism, and inequality. Take a look at the map for yourself. We hope it inspires you to engage, unafraid, in the process of healing our divides through direct, local, person-to-person action of your own — whatever form that might take.

Also see YES! Magazine’s article “A Digital Map Leads to Reparations for Black and Indigenous Farmers”, for a deeper dive into the history behind the birth of the reparations map and its first fully-funded project, the Harriet Tubman Freedom Farm.

For permission to repost this or any other Local Futures blog, please contact [email protected]

Can Localism Restore Sanity to Politics?
The Commons, Short and Sweet

Sean is an environmental advocate and writer who lives in New York's Hudson Valley. He currently works at Riverkeeper, a clean water advocacy NGO, and was previously part of the core team of Local Futures.