You are here: Home / Localization / Mapping the Local Economy

I learned about cottonwood trees as a Master’s student in Resource and Environmental Management at Simon Fraser University. These riparian trees do extremely well on the riverbanks of North America, but the ecosystems in which they thrive require regular flooding from the river. Our small towns in the global economy are very much like the small ecosystems along the riverbanks; the river rushes by, and we are dependent on the overflow to keep going. How we manage that overflow is exceedingly important, and my Master’s project focused on methods to accurately measure the circulation of currency within a small economy. The tools I developed calculate the average number of times a dollar is spent within a community, as well as the breadth of that circulation. Both are equally important, much as the distribution of water within a riparian ecosystem is just as important as the length of time the water stays in that ecosystem.

The number of times a dollar circulates within an economy is known as the “multiplier effect.” Conceptually it is quite simple and is often used as a justification for localization: spend your dollars locally and those recipients will have a bit more money that they, too, can spend locally, leading to a single dollar having a greater impact than if it were spent just once. However, the “input-output” models used by economists to calculate the multiplier effect are meant for macro-economies, wherein businesses are aggregated into industries, or “sectors.” This does not provide us with a means to “map” the economy, and individual contributions to the economy are diluted beyond identification.

To address this, I investigated social network analysis (SNA), which uses “graphs” to map out social networks of interest. I had the idea that perhaps SNA could be used to learn about the actual path a dollar takes while circulating in a community. It turns out that a map of an economy can be made to look like the delightful game, “Snakes and Ladders,” which I learned had a mathematical solution. This means it is possible to calculate precisely the average number of turns a game configuration will take, using “Markov chains,” which are tools to analyze “random walks,” where possible choices of the next step have a range of probabilities of being taken.   A player’s piece moving through the game after a roll of the dice is the same as your dollar moving through town, with the probability of being spent at any given business in town being equal to the percent of your total expenses that go to that business.

Along the way I learned something very important: the mathematics underlying input-output models, social network analysis and Markov chains are all the same! Community groups can survey local businesses and individuals, map out their economy, and calculate the average number of times a dollar circulates in their community – with equal validity to the economists’ input-output model tool. This is very important to putting forward legitimate numbers about the benefits of localization. 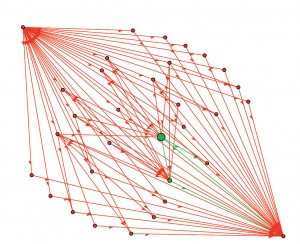 Figure 1: Map of circulation of currency in Dunster, British Columbia, Canada. Dollars enter at the upper left and exit at the lower right. Goods and services flow in the opposite direction.

However, building long localized purchasing chains is not the only thing that has to happen for effective capture of the benefits of localization. It is equally important to measure to whom the benefits are accruing. This often overlooked but critical aspect can make or break a collective localization effort. If a river overflows its banks and all of the overflow water goes into one path, the water cuts a channel into the ecosystem – leading to isolation, fragmentation, and deprivation. The water has to flow widely to ensure all members of the ecosystem capture the benefit, not just an elite few with deep roots and long reaches who might be quite possessive of their water supply.

There is a way to measure this distribution, using the “Gini coefficient (GC),” which is a numeric value for the degree of inequality in the distribution of an object (like slices of a pie), and most closely associated with income and wealth (but can be used to measure other distributions). The higher the Gini coefficient, the worse the inequality in distribution. This is the reverse of the value that I needed, so I used what I refer to as the “equality Gini coefficient,” or eGC, which is simply 1-GC (the GC is limited to values between 0 and 1, so the eGC has values between 1 and 0). The higher the eGC, the greater the equality of the distribution. Using Figure 2 for illustrative purposes, our goal is to maximize the area of equality (B), which reduces the area of inequality (A). The eGC has its own inherent moral persuasion and reward so I find it a more normative measurement than the basic Gini coefficient. 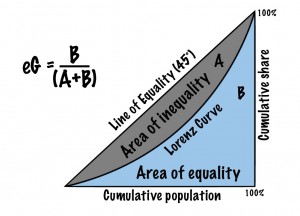 If we multiply the average path lengths of dollars spent by individual businesses in an economy (from when the dollar entered to when it left) by how widely those dollars were distributed locally, we have a measurement of that business’ contribution to the local economy, as well as a measure of the economy as a whole. Communities can establish benchmarks that they want to meet and quantitatively measure their progress. This is particularly important for communities that are managing local natural resources, as is the case in Dunster, British Columbia. Dunster is home to the Dunster Community Forest Society, which has control over an area of 20,000 hectares, from which they can log 15,000m3 of timber per year. In the summer of 2011, before their logging had gotten underway, I spent four months mapping out the Dunster economy (see Figure 1). In late 2014, the Journal of Rural and Community Development, out of Brandon University, in Manitoba, Canada, published the results in three articles that I co-authored with my committee members, Dr. Evelyn Pinkerton and Dr. Andrew Cooper.

Although the articles were published in a peer-reviewed academic journal, I wrote the articles to be accessible by anyone interested in managing resources locally. The foundation article and the case study on Dunster provide both background and proof-of-concept. The third article formally highlights the mathematical equivalency of social network analysis with input-output models, which was well-known fifty years ago but is overlooked today. The third article also gives detailed instructions on how to do these calculations in a spreadsheet application, provided it can invert matrices (the open source application OpenOffice Calc can, and the article uses this software). The data from the spreadsheet can be exported into a format that is readable by Gephi, an open source application that can generate maps for a visual representation of the economy.

Be forewarned: you may find the claims of “a dollar spent locally is spent X more times” are vastly optimistic. Much of each dollar leaves a community immediately – through mortgages, insurance, taxes, utility bills, and even the goods that are resold. A local community grocery store may be a town anchor, but it can only recirculate the profit on the goods it purchased to put on its shelves. For packaged dry goods and many other staples not sourced locally, that profit might only be 5-10% of the sale price.

For example, Dunster was only able to add approximately 20 cents to a dollar coming into town before it left, although they are a particularly small, remote and isolated economy. This was very helpful in testing the theory in my research, but worked against localization due to the lack of local capacity – in fact, they were the perfect foil to the claimed benefits of a neo-liberal economy. With the logs from the surrounding forests as a commodity item and almost no local production of other goods, money simply flowed through the community without creating any local wealth. As Dunster builds capacity and creates partnerships with other nearby communities, they expect to be able do value-added work on the logs, rather than just putting them on a truck and sending them to a wholesaler. One such way the Dunster Community Forest Society is returning money to the community is their community grants program (http://www.thevalleysentinel.com/dunster-community-forest-community-grants/).

There may be some concerns that this is yet another attempt to quantify everything, and I suppose there is some validity to that criticism, but the reverse is equally true: the localization movement is likely to suffer from a lack of quantifiable data and from putting forth claims that do not hold up to scrutiny.

Our towns are riverbank economies facing an increasingly powerful globalized river. Properly managed, though, these riverbank ecosystems can flourish and provide resilience against seasonal ebbs and flows, and understanding our ecosystem is an important step in making effective decisions and achieving successful recruitment to the movement.

The articles referred to above are freely available at: http://www.jrcd.ca//index.php

For citation purposes, the articles are:

Gregory (tim) Kelly, MRM is a PhD student in the Special Arrangement by Request program and a sponsored member of the Interdisciplinary Research in Mathematical and Computations Sciences (IRMACS) at Simon Fraser University in Burnaby, British Columbia, Canada. He is currently coordinating a multi-site, multi-partner study on mathematical models of West Nile virus in bird populations. There is a profile of him at https://www.sfu.ca/grad-sar/StudentProfiles/timkelly.html