You are here: Home / Transportation / Localization and Carfree Cities 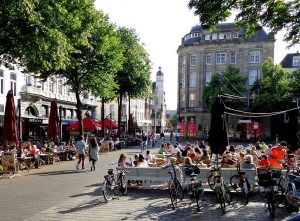 Cars require an inordinate amount of space for their housing (parking), food (petrol/gas/charging stations), and their movement (roads, streets, highways). All of that space that cars take leaves less space for people. As homes, shops, offices, schools, and other destinations move farther apart, the harder it is to achieve localization.

Think of it in concrete (or asphalt) terms. A shopping mall or big box store surrounded by a vast parking lot. Roads too wide to cross on foot. Street corners populated by filling stations. People on foot and bicycle relegated to the margins. No space for local shopkeepers, hawkers, or traditional markets.

Our cities are designed for transport and speed, not for staying close to home and slowing down. The success of our roads is measured by how many cars they move per hour, not by how many people linger under the shade trees and shop from a local street-side market. Zoning ensures single use neighborhoods that necessitate travel to meet basic needs.

American suburbs were built after World War II to promote consumerism, not localization. The houses were built far from shops, schools, and workplaces to force people to buy cars. Single family homes also required each family to purchase more furniture and appliances than they would have needed if living in an apartment building. The purpose was to stimulate the economy to avoid another Depression, not to create happiness or wellbeing.

As car ownership grows, more buildings are torn down to create space to move and park the cars. Destinations grow farther apart, forcing people to travel farther and often to buy a car simply to get to work. As traffic congestion continues to worsen, commuters – including the unfortunate ones who must travel by packed bus – spend so long in traffic, they have little time to devote to community building. They rarely know their neighbors, even if they do share an apartment building, as they usually enter and leave through the parking area and are always in a rush. Who has time in our fast-paced cities to sit on the front stoop to catch a breeze and get to know others in the community?

The more cars on the road, the worse the air pollution. The worse the congestion. The more cars, the more car crashes with their devastating toll. Cars make it too dangerous or unpleasant for people to move about more slowly by foot or bicycle, modes of transport that also make it easier to interact with those around you, as opposed to movement within a one- or two-ton steel box. Space for cars also takes away from the possibility of having a functional public transit system which, again, allows for interaction in ways that cars prevent. All this is true whether the cars are fueled by petrol, diesel or electricity. Electric vehicles are only as clean as the source of electricity – which all too often is coal. Electric vehicles require massive resources to build, and batteries are themselves harmful for the environment. And a road crammed with cars is unpleasant and unsafe regardless of the fuel source.

The opposite is also true. Cities that have taken space away from cars and returned it to people have seen a dramatic increase in the liveliness of the public sphere. Examples are endless. Melbourne, formerly known as the donut city – a dead empty downtown core – became an attractive, vibrant city by greatly reducing cars in the center. Copenhagen created a series of carfree or car-lite streets that became enormously popular, filled with people, enabling interaction. Bogotá, Colombia organizes a weekly Ciclovía wherein it converts more than 120 km (75 miles) of streets into an open playground for cyclists and others including mobile vendors, attracting over a million people and becoming the main source of livelihood for many sellers.

City after city has seen a resurgence of local economy, culture, and exuberant livability by liberating its downtown area from cars. Many cities have now freed up even more space for people on foot and bicycle so that people can move around, get their needed exercise, and have some fun in a social way during COVID-19. Walking, cycling, and rickshaws are still the dominant form of transport in some Majority World cities, though they too have been overrun by the automobile and motorcycle; they too are fighting to restore their cities and towns to a healthier, friendlier, more ecological past where the local – not endless senseless movement – is valued.

We cannot achieve localization without addressing the design of our cities (urban planning) and how we move around (transport policy). It helps to remember that some of the richest corporations in the world are oil and car companies. They have vast power over politicians, shaping the very vision of cities. Their wealth depends directly on subverting rather than enabling local economies, forcing people to travel ever farther and thus to rely on cars or other motorized vehicles.

Cars guzzle fuel and space. Local economies wither. Neighbors become strangers. The very community spirit that could help community members come together to fight for something better is torn asunder by the presence of roads too wide to cross, by the lack of civic space. Their profits are our loss.

It does not have to be this way. There is growing demand around the world for cities designed for people, not cars; for banning cars from the city center; for improving facilities for walking, cycling, and public transit; for making people who use cars pay the full cost that the cars inflict on our health, our environment, and our communities.

By challenging the car, and outdated approaches to transport and urban planning more broadly, we can make great strides in achieving the benefits of localization.

To learn more and join the movement, please visit www.carfreealliance.org

Debra Efroymson is Executive Director of the Institute of Wellbeing, author of Beyond Apologies: Defining and Achieving an Economics of Wellbeing, and an active member of the Carfree Cities Alliance.