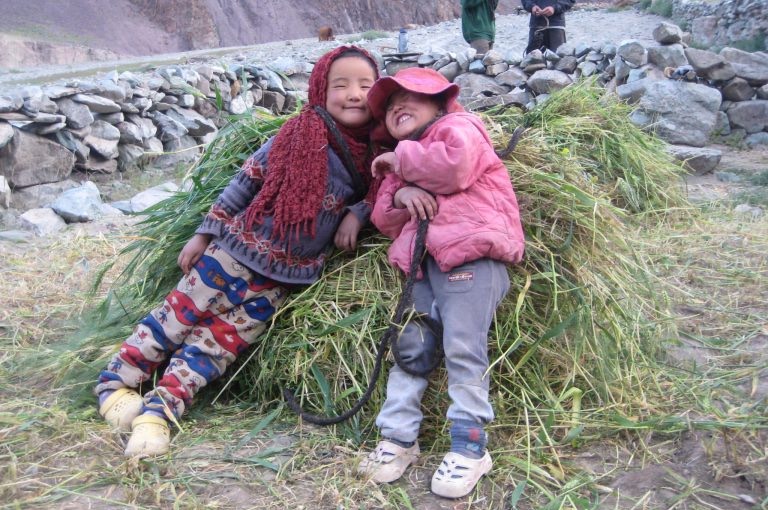 Today, there exists what in my estimation is an unprecedented moment for altering the course of human history. The hopes and dreams for a more equitable, peaceful, just and livable world now have an opening for their realization as never before, which has come about due to the impacts on society from accelerating climate fluctuations and how people will have to respond in order to survive. In this article, first I will discuss how the impacts of a rapidly changing climate are adverse upon modern civilization. Second, I will talk about how localization is the best most cogent response to rectify those adverse impacts. Third, I will show how Buen Vivir – “living well” or “well-being” – is synonymous with localization, containing the crucial elements needed for societal redesign, which is mandatory if we are to survive. I will end the article with some examples of Buen Vivir from the Andean region.

The vulnerability of centralized systems

While human civilization has enjoyed a long period of relatively stable climate, we are now experiencing accelerating climate fluctuations, worldwide. Extreme temperatures, floods and fires are resulting in crop and biodiversity losses, damaged and destroyed infrastructure, and loss of housing and people’s livelihoods. Almost all of our lifeline services – food, water, power, sanitation, transportation – are provided by highly centralized systems that are vulnerable to disruption or failure from these accelerating climate fluctuations. For example, industrial agriculture will be unable to pivot quickly enough to continue to provide food stocks in the face of accelerating climate fluctuations. As transnational supply chains are disrupted and monocultural export crops fail, entire populations will be left to fend for themselves to secure alternate food sources. If we are to avoid malnutrition if not outright starvation, appropriate technology-enabled, human scale, locally acclimatized, food production systems will have to fill in the gaps created by failing industrial import agriculture.

Let’s talk about the private sector for a moment. Naomi Klein, in her description of disaster capitalism, affirms that the capitalist ruling elites view ‘climate change’ as the biggest business opportunity of all time. Only war comes close in its profit-making potential. The problem, however, is that the systems that undergird our civilization have been designed over time under conditions of relatively stable, predictable climate. Now with wildly fluctuating climatic conditions, there is just simply too much risk for things to go badly wrong, especially for transnational corporations making decisions from afar. The costs for ensuring that all the possible contingencies are covered in an environment of increasingly unstable climate are simply too great. This is beyond the capacity for actuarial science to deal with.

Now, moving on to the public sector, the scope and scale of adverse impacts due to accelerating climate fluctuations are such that the state is already and will increasingly be overwhelmed. Disaster readiness, mitigation to eliminate or reduce the hazard, adaptation to better withstand the impacts of climate extremes, all these will become the responsibility of each community, at the local level. As accelerating climate fluctuations are an ongoing hazard that can strike any locality at any time, causing a disaster, local communities could consider following two guiding principles in preparing for the disaster. The first principle is building robustness to better withstand climate impacts, and the second is building resilience to recover more quickly following disruption due to climate impacts.

The critical need for subsidiarity and devolution

In modern times communities impacted by disasters largely rely upon the state for response and recovery. Given the increased frequency and widening scope of adverse climate impacts, however, relying upon a centralized and oftentimes distant resource to provide timely disaster response and recovery is naïve at best and disastrous at worst. The solution is to build local capacity so that communities can be as self-reliant as possible as climate extremes become the new norm. This includes mutual aid so that when local authorities are overwhelmed by a disaster, a well-equipped and trained citizenry can mobilize to help one another. The capacity to deal with accelerating climate fluctuations must become established in the local community that is being affected. This includes decision-making and governance, otherwise known as subsidiarity and devolution. These are key elements of localization, which I will discuss later in the article, but first let’s try to define subsidiarity and devolution, as these are not terms in common use today. Subsidiarity is when all decisions should be made at the lowest level of government authority competent to deal with them. Devolution is the statutory delegation of powers from the central government of a sovereign state to a sub-national level, such as a state or municipality.

A fundamental principle, I believe, is that decisions should be made closest to the people most affected by them. This is crucially important when addressing contemporary civilizational crises. While climate-related disasters are now discussed frequently in the media, the power elite largely ignores globalization, the other exigency threatening the planet. Lives are lived locally, yet are increasingly controlled by remote states and multilateral treaties, which increasingly do not share local people’s interests or concerns. The state, in its bargain with capital, has decimated local economies that once predominated towns and villages, exporting industries and economic livelihoods to cheaper labor markets, oftentimes overseas – the vicious result of globalization. Food security has been replaced by a multiplicity of distant, increasingly industrialized, ecologically destructive, crop monocultures of questionable nutritional value, shipped across great distances.

Under globalization, precarity increases, with life’s essentials including food, water, energy, employment, and housing, all becoming less assured, undermining peoples’ psychological and material welfare, destroying their well-being. Democratic systems and institutions become corrupt, with electoral politics and representative forms of government serving as a ruse for having a voice and equity. Protected areas by law are meaningless as land is invaded and exploited through ecologically destructive practices encouraged by greedy transnationals, and confidence in government is eroded as laws and regulations lack enforcement. Remote governance undermines local autonomy with decisions imposed from afar, and burdensome taxation can be imposed for things that local communities have no interest in.

What is the solution to the disaster of globalization? Localization! Localization is a social movement emerging in recent years as a reaction to globalization and neoliberalism. It advocates for a return to a sustainable way of living, determined by the people who live in a place, not by some transnational half a world away. Localization combats the impersonality and harms caused by capitalism, and it fosters self-reliance and self-sufficiency through use of appropriate technology, circular economies, local currency, mutual aid, local food, people’s assemblies, and so forth. Rooted in the ecology of the place, localization fosters the use of local sources – thus requiring less energy compared to transporting goods or services from outside the locality, department, country, region, or continent.

In order to bring about localization, villages, towns and municipalities need to be given greater authority and autonomy. Locals are in the best position to address their own immediate and changing conditions, be they social, economic or climatic. Whether it is the ability to stabilize their local economy, buffering the adverse impacts of ‘free’ markets and ‘lower (monetary) costs’ imposed from afar, or planning and performing adaptation measures to ensure continuity of their water and sanitation systems during floods or droughts. Localization can be stimulated and strengthened by the state granting greater autonomy to municipalities for self-determination, i.e., local decision-making. Indigenous peoples have been practicing local decision-making through people’s assemblies within communal settings for millennia. Many of the practices required to bring about localization can be found in the ‘old’ ways of ancestors, before aggregation of power through statism and capitalist exploitation swept the globe.

Many of the measures communities need to take to become disaster-ready are the same as those to bring about localization. Actions taken by local communities to become robust, resilient, self-reliant and self-sufficient will be through rebuilding local economies, culture, democracy, and food sources. The twin disasters of accelerating climate fluctuations and globalization wreaking havoc today upon communities can be addressed in a single concerted effort.

Where does Buen Vivir fit into this discussion? In the twenty-first century, human habitat – including our relations with one another, and between ourselves and nature – have been shaped by materialism, manifested through a multiplicity of forces including, but not limited to, globalization, capitalism, and neoliberalism, to name but a few. These forces have fostered isolation, individualism, competition, greed, inequity, classism, consumerism, materialism, uniformity, inequality, injustice, and exclusion, all of which are the antithesis of Buen Vivir.

Found in both Andean and Amazonian societies, Buen Vivir is about good living together, among humans and non-human entities. It is about the rights of people to health, education and shelter, and promotes a new/ancient way for improving the quality of life including greater happiness – but not through the possession of material goods as the capitalist way of society is promoting. While improving the relations between people and also with nature, Buen Vivir does not aspire to be a unique society; instead it aims to create a pluralist society with respect for different cultures, welcoming their equal participation. It promotes the ideals of living in harmony with nature, being conscious of the capacity of ecosystems so as to avoid their destruction, and creating a society of equity, participation, and sustainability. Ultimately, Buen Vivir fosters love, caring, social justice, equality and good community relations.

Many of our transactions today require little to no contact. They can be done from a distance via telecommunications, and because of the distancing there is no proximity and real contact between people. Civilization today suffers from an interminable loss of trust between people. What Buen Vivir tells us is that healthy relationships, which build on trust, require personal proximity and contact. Healthy relationships, between persons, and between people and their local ecological surroundings, are essential to restoring the world to a condition of health and balance.

Does Buen Vivir exist anywhere today, or is it simply a romantic dream from the past? Elements of Buen Vivir do indeed exist and are being rediscovered, adapted to local conditions and placed into practice. Ancestral communal practices that date from Incan times today are found in Andean countries. Land is still farmed collectively by Quechua and Aymara family clans called ayllus, which is the basic socioeconomic unit passed down from the Incan civilization. Not only is land communally owned, collective labor/work called minka is done for purposes of social utility and community infrastructure projects. Both ayllus and minka are nested in ayni, which is the reciprocity or mutualism that is the bedrock of community. Needless to say, these practices exist without markets or a monetary system. A specific example of a village manifesting elements of Buen Vivir can be seen in the small town of Samaipata in eastern Bolivia. A Transition Town that emphasizes local food and goods and whose social organizing adheres to traditional methods of direct democracy, Samaipata has been studied by researchers. Findings showed high levels of happiness and reduced ecological footprint.

To conclude, I believe that going forward people must foster localization to survive accelerating climate fluctuations, and to also address the problems caused by globalization. In the process, the quality of life, of Buen Vivir, can be rediscovered and reinstituted into our lives and communities. This is the time for bold experiments by people and governments. We’re all in this together and we haven’t a moment to lose.

Food sovereignty on the Navajo Nation
An agribusiness greenwashing glossary

Christian Stalberg has taught courses in building energy modeling, renewable energy generation, ecovillages, and disaster readiness for utilities, architectural and engineering companies, NGOs, colleges and universities. He is currently a PhD student at the California Institute of Integral Studies in San Francisco, California.