You are here: Home / Food and Farming / Local Food and the Art of Tractor Maintenance 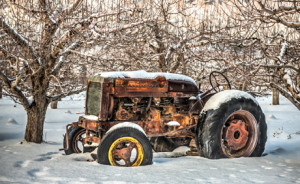 The way we describe local food systems can make it seem as though just two parties are involved: we talk about “linking farmers and consumers”, or “shortening the distance between production and consumption”. But a healthy local food system is not just a reciprocal relationship between food producers and consumers. It is more akin to an ecosystem, with complex webs of interdependence among participants filling dozens of niches. And as with an ecosystem, the whole requires the health of all the parts.

This truth was made plain here in Hardwick, Vermont, when Morris Rowell retired and the doors to his tractor supply and repair shop closed permanently. While the demise of some businesses in this area are scarcely noticed, the loss of Rowell Brothers Ford has left a huge hole in an otherwise thriving local food and farming economy.

The business began 43 years ago when four brothers from a dairy farm family pooled their resources to open a Ford tractor franchise. The franchise went belly up in the mid-1980s, when the “get big or get out” policies of the Reagan-era Department of Agriculture led to a collapse in commodity prices, and to financial ruin for many small farmers. But Morris and one of his brothers kept the doors open – repairing tractors and selling feed, baling twine, equipment parts, and other needs of local farmers. Ever since his brother’s death about 15 years ago, Morris has been running the business on his own.

At 82, Morris is still fit – a tall, stocky man with thinning grey hair, wire-rimmed glasses, and a soft voice. He was usually found behind the Rowell Brothers counter at a cluttered desk, with piles of paper and tractor catalogs nearly burying a desktop computer that seemed like someone else’s idea: what Morris needed to remember he wrote down on paper, and most of what he needed to know was already in his head.

Morris is quiet by temperament, though he was always willing to share his encyclopedic knowledge of farm equipment – not to make idle conversation, but to help solve whatever problem you might bring him. Several times I asked Morris about some rusting hulk of equipment found in the back of our barn or half-buried in the woods – something that I dreamed of restoring or just wondered how it worked. Morris always knew immediately, and would quietly explain it, part by broken part – then tell me where I might find, hidden at the edge of someone’s hayfield, some of the pieces that were missing or beyond repair.

While Morris is a model of even-keeled calm, his ace tractor mechanic, Fred Norton, is the barrel-chested, bearded opposite. Outgoing and gregarious, Fred was apt to burst into the shop from the attached garage, denounce a reluctant transmission, enthusiastically hale one or two of the assembled customers, grab a tractor part from a shelf and then stomp back into the garage, trailing gear oil and a thick Vermont accent in his wake. Morris never seemed to notice: he was like a high school math teacher writing equations on the blackboard, studiously tolerant of the high spirits erupting behind him.

If farmers can be judged by their tractors, the customer base of Rowell Brothers ran towards the marginal end of the economic spectrum: one never saw massive 300-horsepower tractors like those used on the big (for Vermont) dairy farms; the tractors awaiting repair were usually ancient Ford 9Ns, mis-painted Cases, or rusty 1940s Farmalls – with enough dirt and manure clinging to them to tell you that they were hard at work when mechanical calamity struck. Now that the Rowell Brothers parking lot is empty, I realize how much pleasure I got from seeing those tractors, and guessing whose they might be. Small enough that they would only be useful on a humble farm or homestead, they were evidence that something interesting and real was underway in the surrounding hills.

Morris wanted to find a buyer for his business, but nothing panned out. A retired dairy farmer gave it a try that lasted about a week, but after so many years of working in barns and out-of-doors, it just didn’t suit him to sit behind a counter all day.

One factor that likely dampened buyer interest was the Tractor Supply store that just opened in Morrisville, 15 miles west of here. A chain “big box” store with over 1,000 outlets across the US, the company has been growing rapidly: one recently sprang up in Newport to the north, and another in Montpelier to the south. With most farmers struggling to make ends meet, a corporate business model based on their trade seems surprising. But if you look at Tractor Supply’s advertising or stroll down their aisles, it’s clear that they don’t really cater to farmers: their customer base is found in middle-class suburbanites who like to think of their riding lawnmowers as powerful and manly “garden tractors”. Although Tractor Supply doesn’t do repairs, they do sell enough of the basic needs of local farmers – baling twine, wood shavings, grease, oil, and even some equipment parts – that anyone who considered taking over Morris’ business would be wary of the competition.

Corporate chains like Tractor Supply can never replace a locally-owned and run business like Rowell Brothers: all of their “sales associates” combined don’t have a fraction of the knowledge Morris and Fred embody. Nonetheless, small businesses like Morris’s have a hard time competing against highly capitalized corporations that can easily spend more every day on advertising than Rowell Brothers made in a year.

If local economies are like ecosystems, many of the strands of interdependence in this community ran through Rowell Brothers Ford, and its demise will make life noticeably harder for the rest of us. The fact is, a local food economy requires more than just farmers and their customers: it also requires people like Morris and Fred, two of the unsung heroes of this particular local food system.

Planet Local: Bhaskar Save, the Gandhi of Natural Farming
Permaculture and the Myth of Scarcity