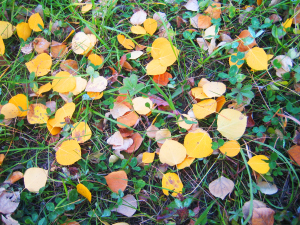 ne emerges from somewhere in the distance. Soon another whine, slightly different in pitch, joins the first, then another, and another, straining towards a ghastly cacophony. In a few moments, the acrid-smell of two-stroke exhaust wafts over the neighborhood, settling down on garden beds, on heads, in lungs. It is a leaf-blower quartet, hounding leaves.

Wherever in the US there are deciduous trees, this scene is repeated countless times every autumn. For landscaping companies, city crews, and many homeowners, fallen leaves violate an unwritten landscaping aesthetic: sterility, order, uniformity, and monoculture. It is a code that equates leaf litter with discarded chip bags and candy wrappers, and insists on the same destination for them all: “away.”

Landscaping crews make their weekly rounds, servicing the yards of those with the disposable income to pay for the removal of trees’ careless bounty. With a steely resolve, the crews rout leaves from the deepest recesses of yards, herding them out of bushes and across lawns on fossil-fueled windstorms, corralling them into enormous piles.  Then they undertake the morbid task of entombing them in petrochemical caskets – plastic bags.

The next step is usually hauling them to the graveyard of industrial society’s excreta – a place called the landfill. At best, some of the leaves will be liberated from their plastic coffins and composted by local municipalities. This compost will perhaps be used on public parks, or sold back to the same public whence it originated. The rest will languish in leaf hell, cut off from the conditions necessary for dignified decomposition. The following spring, colorful plastic bags of synthetic fertilizer will be purchased and spread around the base of the trees and on the surface of the yards from which leaves were hijacked. The cast off fertilizer bags will meet last fall’s cousins in the graveyard.

The costs of this process go far beyond the expenditures of homeowners or municipalities.  In the US, where there are millions of leaf blowers in operation (5 million were purchased in 2009 alone), refueling all these engines leads to the spilling of 17 million gallons of gasoline each summer – more than the 10.9 million gallons of crude oil spilled in the Exxon Valdez disaster.  Running these machines results not only in earsplitting noise pollution but staggering amounts of toxic air pollution: the average leaf blower emits “the same amount of hydrocarbons in one-half hour as a car traveling 7,700 miles at 30 miles per hour.”

It shouldn’t be this way.  Leaves are full of nutrients, and nourish and enrich the soil wherever they reach it and decompose. They conserve the soil’s moisture, feed its organisms, and make a compost that helps feed next spring’s growth. Rather, they would do all that if left alone, or gathered up and redistributed around patches of exposed ground.

Admired on the branch, leaves become despised once they fall from it. Beautiful leaves become damn leaves as soon as they finish the arboreal spectacle. Appreciated at its safe distance, nature is scorned when it ruffles the manicure. If leaves are not left or loved, it is because doing so is unnecessary, like caring about soil fertility generally, when ersatz fertility can be bought in an N-P-K bag, and when food comes from the supermarket economy.

In traditional agrarian cultures, where people depend on the surrounding land to provide local food and other necessities of life, fallen leaves take on a precious significance.  They provide mulch for gardens and nutrients for the soil; fed to livestock they are transformed into milk, wool, meat, and energy for all manner of work. To such cultures, the idea of leaves, branches, grass and the rest being a burdensome irritation to be stuffed into plastic bags and shipped away on diesel trucks would seem irrational, bordering on mad.

The treatment of leaves and other local biomass by many in the North is emblematic of a malaise. Marx called it the ‘metabolic rift’ of industrial agriculture in which, as Wendell Berry has quipped, a solution (leaves, local biomass) is divided neatly into multiple problems (soil infertility, synthetic fertilizer dependency, plastic waste, fossil-fuel pollution).  It is symptomatic of much else that is wrong with industrialized, globalized economies.

Amidst the frenzy of the leaf war, however, a motley band of iconoclasts can be found doggedly pursuing leaves, not to banish them, but to mulch them to feed the soil – “that black subterranean castle of unobservable mysteries,” as poet Mary Oliver called it .  These leaf-hoarders are organic gardeners – cornerstones of the localization movement – who renounce synthetic inputs, depending instead upon local biomass for soil tilth and fertility. Returning leaves to their natural cycle helps suture the metabolic rift, reclaiming the gift of free biomass and in the process, eliminating so much utterly unnecessary waste and pollution. Perhaps more importantly, converting local leaves into local food helps heal the ‘cognitive rift’ – the ignorance of true costs of the systematic distancing of production and consumption inherent to the global economy. Localization is about living without dependence on distant plunder, and it could perhaps be said to begin with leaves. To lean on Wendell Berry again: “The closer we live to the ground that we live from, the more we will know about our economic life; the more we know about our economic life, the more able we will be to take responsibility for it.”