You are here: Home / Technology / Is resistance futile? The myth of tech inevitability

“There is absolutely no inevitability as long as there is a willingness to contemplate what is happening.”
— Marshall McLuhan, The Medium is the Massage 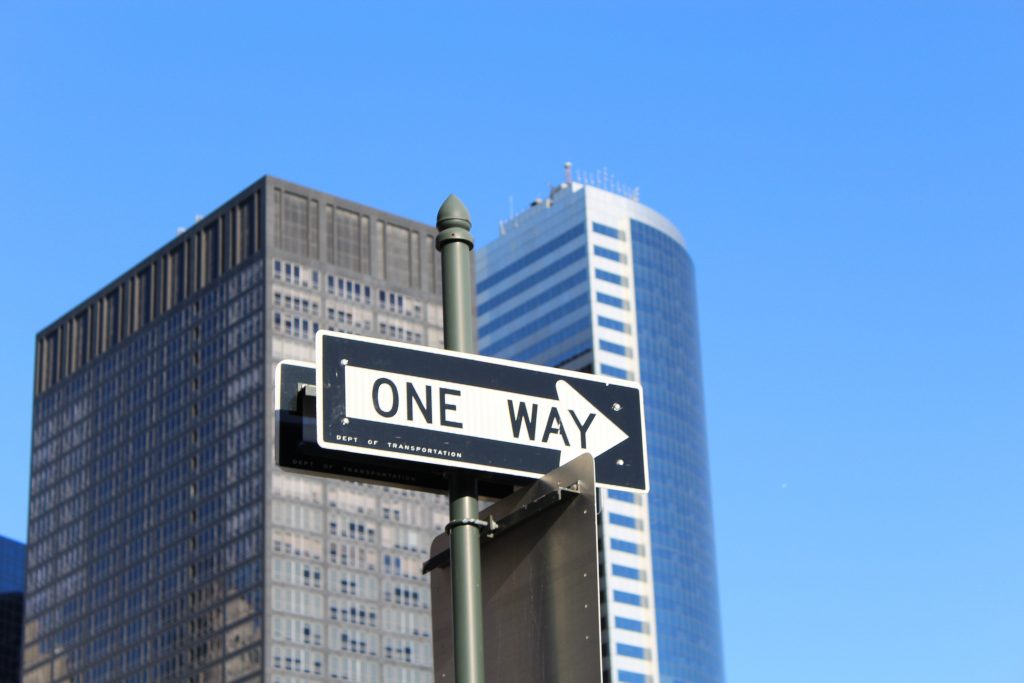 The relationship between technology and narrative is long-standing. Indeed, some have argued that it is at the heart of human civilization.

It was once fashionable to characterize human beings as tool-using animals (although this turns out not to be the best way of getting at whatever might be distinctly human). It has also been suggested that we understand human beings as story-telling animals. Technology theorist N. Katherine Hayles has implicitly argued for a synthesis of these two positions by framing narratives as a technology for making meaning.

Hayles argued that “the primary purpose of narrative is to search for meaning, thus making narrative an essential technology for human beings, who,” she claims, “can arguably be defined as meaning-­seeking animals.”

Historian of technology David E. Nye has also linked narrative and technology in a slightly different, but likewise intriguing manner: “Composing a narrative and using a tool are not identical processes, but they have affinities,” Nye observed.

“Each requires the imagination of altered circumstances, and in each case beings must see themselves to be living in time. Making a tool immediately implies a succession of events in which one exercises some control over outcomes. Either to tell a story or to make a tool is to adopt an imaginary position outside immediate sensory experience. In each case, one imagines how present circumstances might be made different.”

“To link technology and narrative,” he adds, “does not yoke two disparate subjects; rather, it recalls an ancient relationship.” What’s more: “A tool always implies at least one small story. There is a situation; something needs doing.”

Nye argued that tools and narratives emerged symbiotically, as byproducts of a capacity to imagine what was not temporally encased in the present. He argued, too, that human culture depended on their emergence. In other words, tool making and storytelling are deeply related and integral to the human experience as we know it.

Not surprisingly, we use technology to tell stories, themselves a kind of tool as Hayles suggested, and we tell stories to sustain and direct our use of technology. To better understand our relationship to technology, then, it is certainly worth examining the stories we tell about our tools. Some of these narratives are of the grand variety:  stories, for example, that aim to explain the underlying dynamics driving human history or the ostensibly distinctive features of a national culture. The Enlightenment myth of progress, comes to mind, or the myth of American ingenuity. Some narratives frame a particular class of technology, such as the mythos that surrounds the automobile in American culture. Then there are the more modest micro-narratives, which we weave around our own personal devices and tools. These stories order our relationship to technology as individuals and as a society.

Over the past several years, I’ve been especially interested in the role played by narratives of inevitability, that is to say, narratives that frame technological development as a deterministic process to which human beings have no choice but to adapt. I’ve sometimes called this the rhetoric of technological determinism.

Several years ago I also coined a phrase that now strikes me as being rather less clever than then I imagined. With a nod to the Star Trek franchise, I began writing about those who deployed narratives of inevitability as suffering from a Borg Complex. I’m not especially well-versed in Star Trek lore, but it seemed to me that the Borg meme was popular enough to work as a catchy label for the rhetoric of technological determinism. You’ll remember that in the Star Trek universe the Borg are a hostile cybernetic alien race that announces to their victims some variation of the following: “We will add your biological and technological distinctiveness to our own. Resistance is futile.”

Resistance is futile. This seemed like a perfectly apt way to sum up the essence of the rhetoric of inevitability that was such a common feature of tech discourse.

I’ll give you a few of the examples that initially captured my attention.

Here is the notable American tech enthusiast, Kevin Kelly, on the question of automation a few years back:

“It may be hard to believe, but before the end of this century, 70 percent of today’s occupations will … be replaced by automation. Yes, dear reader, even you will have your job taken away by machines. In other words, robot replacement is just a matter of time.”

Kelly, incidentally, is probably a poster boy, if a rather amiable one, for the rhetoric of technological determinism. He wrote a book about tech trends actually titled The Inevitable.

Writing about ed tech in 2012, Nathan Harden claimed, “In fifty years, if not much sooner, half of the roughly 4,500 colleges and universities now operating in the United States will have ceased to exist. The technology driving this change is already at work, and nothing can stop it.”

A moment’s reflection will, of course, reveal that the trends Kelly and Harden claim to be merely announcing as inevitable outcomes are not merely matters of technical development and innovation. They are also functions of economic policies, legal structures, political power, and shifting cultural values.

Interestingly, around the time that I was first collecting examples of these stories of inevitability, Google was pushing its first iteration of Google Glass. Initially, it was widely touted as a transformative new technology. Gradually, however, it became clear that however many stories of inevitable adoption were told, Glass was not going to catch on.

At the time, the CEO of Evernote, Phil Libin, made the following claim in an interview with HuffPost:

“I’ve used [Google Glass] a little bit myself and – I’m making a firm prediction – in as little as three years from now I am not going to be looking out at the world with glasses that don’t have augmented information on them. It’s going to seem barbaric to not have that stuff.”

This firm prediction has not, as they say, aged well.

Glass is but one relatively recent and prominent example of tech touted as inevitable, which was anything but. As it happens, though, we tend to forget these examples. As historian Thomas Misa has written,

“we lack a full picture of the technological alternatives that once existed as well as knowledge and understanding of the decision-making processes that winnowed them down. We see only the results and assume, understandably but in error, that there was no other path to the present. Yet it is a truism that the victors write the history, in technology as in war, and the technological ‘paths not taken’ are often suppressed or ignored.”

Naturally, most of the examples I’ve collected over the years come out of my own US context, but narratives of inevitability are widespread. I’ll note, for the UK audience, one example from a 2017 report prepared by a Conservative MP presenting the case for a tech friendly government policy. “It is impossible to resist the rise of the machines,” the report concludes, “so we must let them lift us towards a Global Britain that uses the Fourth Industrial Revolution as a springboard to a more productive, outward-looking economy.”

You may have already noticed the prevalence of this rhetoric of inevitability. In more recent years, it’s often framed public debates about autonomous vehicles and surveillance technologies.

It’s worth noting that narratives of inevitability come in all manner of temperamental variations, ranging from the cheery to the embittered. There is also variation regarding the envisioned future, which ranges from utopian to dystopian. And there are different degrees of zeal as well, ranging from resignation to militancy. Basically, this means that the rhetoric of inevitability may manifest itself in someone who thinks resistance is futile and is pissed about it, indifferently resigned to it, evangelistically thrilled by it, or some combination of these options.

The sources of these narratives also vary. They may stem from a philosophical commitment to technological determinism, the idea that technology drives history. This philosophical commitment to technological determinism may also at times be mingled with a quasi-religious faith in the envisioned techno-upotian future. The quasi-religious form can be particularly pernicious since it understands resistance to be heretical and immoral. Painting with a decidedly broad brush, the Enlightenment, in this reading, did not, as it turns out, vanquish Religion, driving it far from the pure realms of Science and Technology. In fact, to the degree that the radical Enlightenment’s assault on religious faith was successful, it empowered the religion of technology. To put this another way, the notions of Providence, the Kingdom of God, and Grace were transmuted into Progress, Utopia, and Technology respectively. If the Kingdom of God had been understood as a transcendent goal achieved with the aid of divine grace within the context of the providentially ordered unfolding of human history, it became a Utopian vision, a heaven on earth, achieved by the ministrations Science and Technology within the context of Progress, an inexorable force driving history toward its Utopian consummation. It’s worth noting that stories of technological inevitability tend to flourish in contexts were the cultural ground has been prepared by linear and teleological understandings of history.

Of course, narratives of inevitability most often arise from a far more banal source: self-interest, usually of the crassly commercial variety. All assertions of inevitability have agendas, and narratives of technological inevitability provide convenient cover for tech companies to secure their desired ends, minimize resistance, and convince consumers that they are buying into a necessary, if not necessarily desirable future.

Recently, Margaret Heffernan succinctly summed up the underlying message of Big Tech’s rhetoric of inevitability in a personal and eloquent reflection on the theme: “The future might not have happened yet, but it was already decided.” “The goal,” as she put it, “isn’t participation, but submission.”

Once again resistance is futile. One either gets on board or gets left behind.

Narratives of inevitability have the effect of foreclosing thought and deliberation. If outcomes are inevitable, then there’s nothing to do but assimilate to this pre-determined future, to go along for the ride prepared for us whatever the consequences. As Lauren Collee has recently put it, “Techno-determinist futures … are used to habituate us to the present.” And, specifically, to the present designs of tech companies.

The truth, of course, is more complicated. As historians of technology have demonstrated, historical contingencies abound and there are always choices to be made. The appearance of inevitability is a trick played by our tendency to make a neat story out of the past and project it onto the future. And this tendency is one that tech companies are clearly prepared to exploit.

So, to sum up, beware narratives of technological inevitability. Resistance, if it be necessary, is not necessarily futile, and, as Heffernan reminds us, “Anyone claiming to know the future is just trying to own it.”

Photo by June Admiraal on Unsplash

The changing nature of milk
World Localization Day is back!

L. M. Sacasas reads, thinks, writes, and talks about technology, usually in that order. His writing appears on his blog, The Convivial Society. The best 100 posts from his previous blog have been collected in an e-book, The Frailest Thing: Ten Years of Thinking About the Meaning of Technology