You are here: Home / Food and Farming / Industrial Agriculture is No Solution for Africa 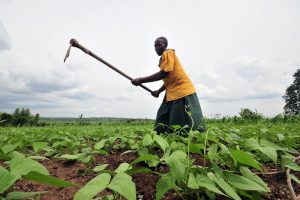 The theme for this year’s African Green Revolution Forum (AGRF) to be held in Nairobi from September 6-10 is ‘Pathways to Recovery and Resilient Food Systems’.  Yet 15 years after its convener, the Alliance for a Green Revolution in Africa (AGRA) was founded in 2006, questions remain about the viability of its high inputs model in addressing Africa’s food insecurity.

AGRA has been funded to date by governments and major international donors such as the Bill and Melinda Gates Foundation to “transform African agriculture from a subsistence model to strong businesses that improve the livelihoods of the continent’s farming households”. However, data from the countries where AGRA has focused its efforts have seen continued poverty and a 30% rise in food insecurity.

To highlight the gravity of this issue and the level of concern in African civil society, faith leaders and supporting organisations across Africa, nearly 500 actors, signed an open letter to the Gates Foundation asking them to stop supporting AGRA’s industrial farming initiatives. Our view is that we do not need farming ‘solutions’ – what we need is support for locally appropriate solutions, working in partnership with small-scale farmers in ways that increase climate resilience.

As can be seen from the AGRA’s approach, and other top-down approaches that have failed in Africa, such as UNFCCC REDD+ and the World Bank’s CDM, climate change is a complex issue, and it will not be solved by a narrowly defined business-oriented approach that focuses on profit and investment returns.

Over the past 15 years AGRA has been working to restructure seed laws, so that corporate entities’ certified varieties are protected, while trade of non-certified seed is criminalised. This is particularly problematic for small scale farmers in Africa, where 80% of non-certified seed and food come from millions of smallholder farmers who recycle, and exchange seeds each year. This “open-source knowledge bank” of seeds that cost little-to-nothing have all the nutritional value needed to sustain these communities.

Not only does the corporatisation of seed undermine existing indigenous knowledge systems regarding seed diversity and multi-cropping, but more insidiously, it centralises control of production systems, disempowering and reducing the resilience of small-scale farmers who rely on informal trade, historical and cultural knowledge in addition to their unique understanding of their ecological landscapes.

Around the globe, agribusinesses, driven by initiatives like AGRA, have been trying to convince governments and financial institutions that they hold the answer to solve the world’s hunger problems through improved production. However, this concept has been debunked by food system research and a complete lack of success. The world does not have a food production problem, rather hunger is a result of lack of access and inequality.

The “Green Revolution” has already failed in India where recent widespread farmer protests made it crystal clear that this approach does not work out fairly for small farmers. In Africa, smallholder farmers, oftentimes women, are indispensable to its nutritional and climate resilient future. Those funding AGRA need to take stock of its failures to date and realise that farmers already know what they need to tackle climate change and need support to do so.

If the Gates Foundation really wants to transform poverty in Africa, they need to sit down and learn from small-scale farmers around the world, who have food systems that are socially just and ecologically sustainable. Their challenges include access to market and other factors where assistance would make a difference.

We urge donor foundations to find ways to work with smallholder farmers to ensure that they have ample support and to assist governments to implement holistic, supportive strategies. And, instead of giving ownership to multinational corporations, they should help ensure that local communities have a real stake to have their voices heard in policy negotiations. They need to secure a commitment to land reform and ensure that communities have agency and power over their own circumstances for self-determination.

This post is part of a series related to the corporate take-over of the UN Food Systems Summit and the many grassroots counter-responses, including the Global People’s Summit on Food Systems (September 21-23) and the People’s Food Summit (October 16). Local Futures is participating in both events.

Gabriel Manyangadze is the Climate Justice Coordinator of SAFCEI, and Programmes Director of the Zimbabwe Councils of Churches.