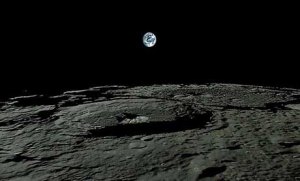 In the summer of 1969, I was 18 years old with a job driving an ice cream truck in a small New England town. One July afternoon the weather was hot and humid – ideal for ice cream – but business was dismal, the streets almost deserted. Eventually someone ran out and flagged me down, but he wasn’t interested in ice cream: “Come in the house!” he yelled, “it’s happening now!” I knew immediately what he meant: the first lunar landing was under way, and Neal Armstrong was about to step onto the moon. I spent the next several hours in a stranger’s house, glued to the TV like millions of others around the world.

Along with the grainy lunar footage and the clipped banter between the astronauts and mission control, what I most remember from that day involved the reactions of the world’s political and religious leaders. Most of the congratulatory messages were a monotonous mix of pride in human achievement and pleas for America to use its foothold on the moon for peaceful purposes. But there was a surprising exception: a shaman from somewhere in Africa (my memory yields neither name nor country) declared that the project was a huge mistake, because “walking on the moon will change the weather.” The news anchor read the text without comment, but I remember thinking how neatly this reflected the difference between the benighted, superstitious world we were leaving behind, and the bright technological future we were about to enter.

Since then my thinking on both indigenous worldviews and high technology has changed dramatically. One reason is that the shaman was right.

The weather has, in fact, changed. Human-induced global warming is accepted by almost everyone but fossil-fuel executives and the most credulous denizens of the internet. But climate change has nothing to do with landing a man on the moon, I can hear you say. In a narrow sense, that’s true, but I don’t believe the shaman was thinking narrowly. As Edward Goldsmith pointed out in his seminal book, The Way, indigenous worldviews commonly hold that humans have a proper place in the cosmic hierarchy, and when they violate that order they bring misfortune to themselves, their families, their communities, the local environment, the world, and to the cosmos itself. Stepping on the moon was, in the eyes of the shaman, an irresponsible act of hubris and disrespect for the natural order.

For those unconvinced by indigenous belief systems, here’s a more “rational” way to look at it. Sending a man to the moon required huge infrastructures for extracting, refining, and transporting energy and other resources, as well as for educational and research institutions that advanced and perfected the many technologies needed for space travel. All these in turn had to be funded by surpluses from an immense centralized economy – one that required tremendous amounts of resources, and that gave rise to equally tremendous amounts of pollution. Even my lowly ice cream truck was part of that economy, helping generate the wealth (and taxes) needed to hoist a man all the way to the moon and back. That truck, not coincidentally, also spewed a lot of greenhouse gases.

In other words, any society capable of putting a man on the moon must have an economy so massive that – as the shaman suggested – it is bound to bring misfortune to family, community, local ecosystems, and the biosphere. This is especially true when that economy is wedded to a reductionist scientific and technological worldview that holds nothing sacred, and is thus able (and willing) to manipulate and commodify everything – even the building blocks of life and matter. This is, of course, a description of today’s global economy.

As we consider our response to the disturbing reality of climate change, we would do well to think broadly, like my unknown African mentor. In this light, climate change is not the most serious problem we face; it is instead the most serious symptom of a larger problem. Other symptoms include the destruction of rainforests, the depletion of topsoil and groundwater, pesticide residues in everything from mother’s milk to polar bear fat, the growing gap between rich and poor, dead zones and floating garbage islands in the oceans, religious fundamentalism and ethnic conflict, the erosion of democracy, the epidemic of depression, and much more.

All of these symptoms emanate from the same source: a techno-economic system designed to meet the profit and growth demands of corporations and banks; a system that is eroding cultural diversity and individual identity by pulling every last one of us into an unsustainable global consumer culture; a system that creates insatiable desires – including the desire for the latest technological “innovation” – but fails to meet our real needs for connection to community and the natural world.

As I hope the African shaman would agree, merely switching from fossil fuels to “clean energy” will be insufficient to address climate change, and it won’t alleviate the many other signs of breakdown. Rather than just changing the fuel that runs this destructive economic system, we need to change the system itself. And rather than continuing to deepen our exploitation of the natural world, we need to acknowledge its sacredness, and approach it with humility.

Photo: “Looking Back at Earth…right from the Moon” by SELENE Team, JAXA, NHK available at https://www.flickr.com/photos/essam/2184253929/ under https://creativecommons.org/licenses/by-nc-nd/2.0/

Indigenous Knowledge and Global Wellness
They Sang with a Thousand Tongues: The Poetry of Diversity